Sorry, a bad link accidentally brought people seeking "Best. Pudding. Ever" to this list, click here for the pudding recipe!

The high hills of Twin Creek’s north bank towered before me.  The flat grassy path I was traversing soon morphed into a rocky ascent.  The ball of my foot burned with each step so after about a half mile I realized the barefoot option probably wasn’t going to work.  So I sat down on a shady patch of the trail and re-laced my sneakers, this time a little looser.  And my feet felt better, I had bought myself a little time.

“There’s a snake in a tree about a mile up ahead, I hope you get to see it,” one man coming the opposite direction told me. 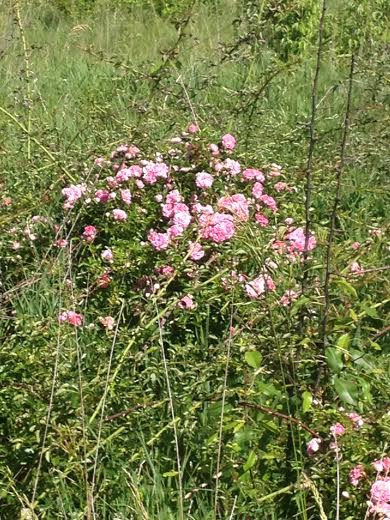 I actually find reptiles interesting but I neglected to ask him and he forgot to tell me which side of the trail I should be looking.  So the next mile was spent searching the trees, tripping over roots as I scanned skyward. I never saw the snake.  Down below in lazy Twin Creek I could spot colorful kayaks slowly making their way downstream, teenage occupants whooping in summer celebration. Summers when you’re 17 move about as fast as the placid, plodding Twin Creek.  When you’re my age summers are no more than rapids in a quick moving stream.  The trail wound away from the creek . I wondered if I would ever arrive at Old Mill campground with its water and snack station.

The name Old Mill brought to mind Old Man Miller.  When I was a child there was still a patch of undeveloped land in Middletown, Ohio.  And kids claimed that deep in the woods lived a hermit christened “Old Man Miller.”    It was the 1980s and this wasn’t frontier country, mountain men didn’t exist anymore.   So I didn’t really believe the tales about Old Man Miller.  I was a kid myself and I knew the yarns we’d spin to while away warm summer days.   But one afternoon my brother and I decided to go exploring in the woods at the end of our street, where the road came to an unceremonious dead end.  We headed to the creek where many of the neighborhood boys spent their summer afternoons searching for frogs.  On this day, however, boredom and the thirst for adventure pushed Geoff and I deeper into the woods.  We followed the creek through a narrow wooded valley which eventually brought us to a clearing.  And there we saw it.  A fallen tree with a rusty airplane propeller blade stuck in it.   And just beyond that a tarpaper shack.

A dark figure – we thought – could be seen in the shadows of the shack.  At the very least we felt we were being watched.  Our bravado evaporated by the whiff of reality, we  both scampered back into the woods and to the safety of our subdivision.    The forest offers a cooling, shady refuge in the summer, but trees are also the harbor of the unknown and the leafy edges of a boys overgrown imagination.  I shook off thoughts of Old Man Miller because finally the woods parted and I could hear some voices.  I had arrived at Old Mill.

I went to one of the volunteer tables where there were maps spread out and snacks and cold water.

“Well, you could always just turn back and go the way you came, you might not want to do all these trails,”  said one volunteer, tracing her finger over a spider web of trails.

Grrrrr, I thought to myself, why is everyone either calling my hike a “stroll” or encouraging me to shorten it?

Determined to finish what I started, I refilled my water bottle and headed off into the trails of Germantown Metro Park.  If I hiked 10 more miles it’d loop me back here to Old Mill.

CAPTION:  Prairie and grass in some stretches of the hike allowed for gorgeous gulps of blue sky.

It had been almost two hours since I had left Old Mill  and this loop I was on would take me back there.  I had grown appreciative of the solitude: the soothing touch of a summer breeze on my neck, the garish sunbursts of goldfinches, the feeling of accomplishment with every step my feet propelled me forward.   My phone battery had long since died and I was on my own, but it was a freeing feeling.  Lewis and Clark didn’t have an app telling them how to find the headwaters of the Missouri and I didn’t need a text, a map or an app to find my way back to Old Mill.   There’s so much noise in 21st century America, but it’s not the noise of garbage pails clanging or wind chimes singing, it’s the noise of the rush.  The constant need to be somewhere, to be tweeting or texting or updating one’s status.  I felt a refreshing sense of calm on my journey.

At about mile 15 as I traversed a  patch of sun-dappled, wild-flower speckled prairie I  heard dirt crunching on the  trail behind me.   I turned around and there was a tall brunette in African safari khaki colors loping towards me. I was being overtaken.

“How far you going?” she asked in a thick French accent.

“I’m doing 28,” she said, now speaking over her shoulder to me as she passed.

“Well, you’re definitely doing a better pace than I,” I said sheepishly.

“I have to, didn’t get started until eeleeeeven theeeerty,” she said, drawing out the time like a fishing line.

“But  if you have it in you, you can do 28…You’ll be okay,” she shouted as she slowly turned into a speck in front of me and then melted into the woods as effortlessly as if she were simply browsing at a mall or reading the Sunday paper.

I vowed to go home and get out my calculator and figure out how fast she would have had to have been moving for me to get a two-hour head start on her and still overtake me.

By mile 18 every step had become an aching effort.  The balls of my feet were cracked and screaming for relief.  It was nearing 5 p.m.   Even if I had it in me to go another 10 miles it’d be almost 9 p.m. when I was done and the reality is that I didn’t know if I had another 8 miles in me.    I thought of how comforting these woods were despite the fire in my legs.    I suppose I  had shaken the ghosts of Old Man Miller, his place was long ago paved under by a four-lane mini-highway.  I thought of one of my favorite books, A Walk in the Woods, and the allure of the Appalachian Trail.  I told myself there would be no shame in stopping this hike early.  The Appalachian Trail Club's website recommends that hikers just starting out on the trail limit themselves to "8 miles per day" in the beginning to acclimate their bodies to the rigors ahead.  Well, I had already doubled that amount.    One should never say never.  I'm tempted to say "I'll never hike the Appalachian Trail", but life is like the forest: organic, alive, full of surprises.  Who knows what might be around the next bend?  Maybe someday I will find myself pounding my chest atop Mount Katahdin in Maine at the AP trail's northern terminus.  One never really knows what lurks ahead in the forest of life.

I decided that I would stop my hike at Old Mill and take the volunteer shuttle back to my car.  My leaden legs seemed to sigh with relief at the decision.

On my way home I called my parents to make plans for Father’s Day the following morning.

“How far did you hike?” My Mom asked me.

I rolled my eyes.  I knew why did it. I think we all have boundaries but it’s up to us to set them and define them. Too often we let others box us in and tell us what we are capable of or not capable of but in the end, our boundaries are one of the few things we get to decide for ourselves.    So maybe what I was in search of that day wasn’t simplicity or solitude, but limits and I found mine and pushed them. I just wish I could have pushed them 8 more miles.

Editor's Note:    The annual Twin Valley Trail Challenge is a non-competitive hike.  Really awesome event that allows a person to challenge themselves on their own terms.  A great group of volunteers runs the event and makes it accessible for all. Click here to learn more!