I've been fortunate to have been to many, many, many Plain communities but there are still a handful that I have not visited yet that I have been itching to. My reasons for wanting to visit range from simple beauty to fascinating theology. Maybe yet in 2014?  We'll see.

Aster has been with us to a couple of Amish communities already but travel with a baby isn't as easy as when it was just Rachel and I so I have my doubts that I'll be getting to any of these anytime soon!

SAN LUIS VALLEY, COLORADO:  I'm not sure if it is as beautiful as the Amish outpost in St. Ignatius but it may well give that Montana community a run for its money beauty-wise.  This relatively new Old Order Amish community tops my list of settlements I'd most like to visit but haven't.  The Amish community thrives in the shadow of the majestic Sangre de Cristo mountains.

Food has a heavy Hispanic flair.

FORT FAIRFIELD, MAINE:   I've seen photos of this community and it does look gorgeous.  But I think I'd probably want to go in the dead of winter.  It's just such a remote place the Amish here would have to be incredibly self-sufficient.

LOBELVILLE, TENNESSEE:   This community is apparently a sort of "hybrid" settlement of Old Order Amish, Mennonites, and Plain people. I'd love to visit and get a feel for the community and where the theology and culture lies.

Okay, I need to get Aster her passport for the next two stops!

ROXTON FALLS, QUEBEC:  There is a small community of Mennonites that hangs on in heavily French-speaking Quebec.

It'd be fascinating to see sample the cuisine in this settlement to see if it has been influenced by French fare and just to see dynamic between the French locals and the English-speaking Mennonites. 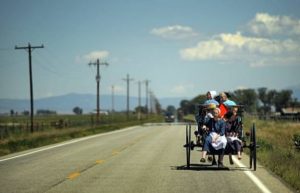 CIUDAD CUAUHTEMOC, CHIHAUHAU, MEXICO:  I'd so love to visit an Old Order Mennonite colony in Mexico.  The food would be an amazing fusion of traditional Mennonite meets Mexican and basically the whole Plain culture would be seen through a Latin American lens which would just be fascinating.