Wow, this is almost a depressing post because I'm not someone that likes to ever say "never."  Yet, on the other hand, I have to be somewhat realistic.  I'm 45-years-old now, I have two young daughters.  I think I'm entering a chapter in my life where I'll be less mobile. I'd love to visit the Amish-Mennonite community in Waterford, Ireland but I'm just not sure how realistic that is.  I mean, I have not been overseas since I was maybe 10.  I'd love to go again someday, but I doubt I'd go to Ireland, I'd probably visit Africa, other parts of Europe or Australia.  So I have to put Waterford, Ireland on the list.   You know, though, things change.  If someone had told me a few years ago that I'd visit the Amish settlement in remote Rexford, Montana I would have said they were crazy.   So life has its curveballs.  I still think I'll be visiting plenty of Amish communities over the years ahead, after all, it's my job. But these 5 I just am having trouble coming up with scenarios where I end up there, so this is my list of 5 Amish communities that I'd love to visit but can't see myself visiting:

WATERFORD, IRELAND:  Would love to visit this Amish-Mennonite community, it'd be amazing.  But I doubt it'll happen.

FERTILE, MINNESOTA:    This is an Amish community in far, far northwest Minnesota.  I've been to Minnesota two or three times over the years and North Dakota once.  So I was close to Fertile when I was in Grand Forks.  Realistically how often does someone make it to Grand Forks, North Dakota?   Yeah, you get the idea.  So I just don't think I'll probably ever make it here.

CASHTON, WISCONSIN:  This are was once just bustling with Amish (and it still is), but for awhile it was just a "hot" destination, Amish were moving in from all over.   This community is on the list for the same reason Fertile is.  I've been to Wisconsin's Amish communities a couple of times and Cashton is pretty remote. I'd LOVE to go here, but I'm just having trouble finding a scenario in my mind where it happens. 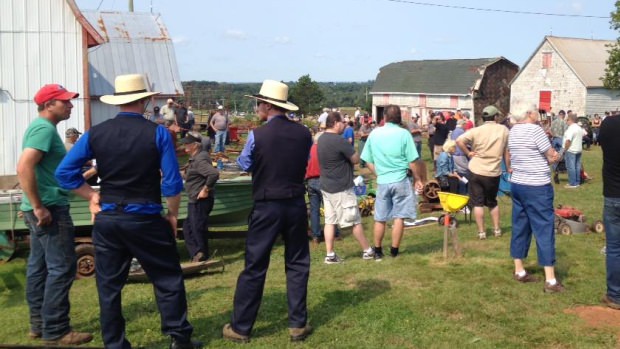 PRINCE EDWARD ISLAND:  Man, I did not want to put this on the list.  I just didn't.  I WANT to visit here someday and I may. But I just have to be realistic.  Prince Edward Island is not easy to get to, connected by a bridge to New Brunswick, which in itself is difficult to get to.  I've been to New Brunswick twice over the past two years.  I mean, the odds of me making it there again anytime soon?  I say the only way I'd make it here is if the local tourism board underwrites a visit from me, which COULD happen.  But it could also snow in Ohio in May.  Yes, it could. But, very, very unlikely.  The Amish are a new presence on PEI, having just moved here within the past year.

SEMINOLE, TEXAS: This is a large Plain Mennonite settlement about 80 miles southwest of Lubbock, Texas. I'd love to visit either this community or its sister settlement in Lott, Texas.  I'm 45 years old and I've made to Texas twice (well, three if you count an airport stopover, which I don't really count).  I have to be realistic that it's probably not going to happen with any frequency.