This is one of our occasional looks at Amish-inspired items on Amazon.   And there are some tasty ones,

AMISH DANDELION HONEY:  Honey does take on the taste - at least a hint  - of the various flowers that a bee pollinates.  The idea of opening a jar of dandelion honey sounds amazing.  Click here to take a look.

AMISH VEGETABLE MEDLEY:  These are pickled vegetables that are canned in an Amish-owned and operated cannery in the Amish community of Arthur, Illinois.  This is the first time I've seen vegetable medley available and it looks really good.  Click here to see more

GLUTEN-FREE CINNAMON ROLLS:  Gluten-free is really big today  I guess I am lucky, I can eat all the gluten I want and I feel no ill-effects.  Wikipedia describes gluten as: Gluten is a composite of storage proteins termed prolamins and glutelins that is stored together with starch in the endosperm of various cereal grains. It is found in wheat, barley, rye and related species and hybrids, as well as products derived from these grains.  And I guess some people are not able to tolerate gluten.  I never heard about gluten issues growing up, but it's definitely emerged as an issue.  So I was intrigued to see these gluten-free cinnamon rolls made from an Amish recipe.  So if you cannot tolerate gluten and have wanted to enjoy an Amish recipe cinnamon roll, then this is your chance!

HOMEMADE GARLIC MUSTARD:  Wow, this sounds amazing too.  Can you imagine dipping some pretzels into this?  This is also made in the Amish community of Arthur, Illinois.  Good stuff.  Click here. 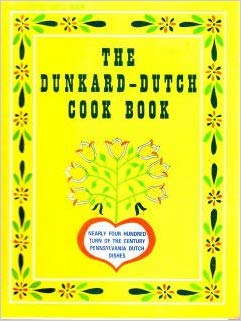 DUNKARD DUTCH COOKBOOK:   I think this cookbook would be fascinating to have and there are used copies available for $5.  Pennsylvania Dutch cooking is a mish-mash of Amish recipes, Mennonite   This book has hundreds of recipes that probably showcase a fascinating time in Pennsylvania Dutch history in the United States.  There are plenty of Amish cookbooks out there, but this is a cookbook that explores the old Dunkard Brethren recipes and Pennsylvania Dutch.   Check out the book here.   Here is more of a description of the cookbook:

This booklet presents more than four hundred turn-of-the-century dishes gathered from Dunkard and other Pennsylvania Dutch.

Included are nearly a hundred and fifty which were selected from recipes collected from sisters of the Church of the Brethren, earlier known as the Dunkards. Some of the Dunkard dishes appeared earlier in the 1901 issue of the Inglenook Magazine Cook Book. This Brethern publication enjoyed a wide circulation among members of that denomination, and some elderly members of that group still use recipes from that source.

In contemporary times, the Pennsylvania Dutch are spread throughout the entire nation, therefore, the dishes selected for inclusion in this booklet are from communities in eighteen states.

It is appropriate that a third of the Dunkard dishes were collected from sisters in Pennsylvania, and the remaining ones were from Maryland, West Virginia, Virginia to the south; Ohio, Indiana, Ilinois, Iowa, Kansas, Nebraska, Missouri, North Dakota, Minnesota and Montana to the west; Oklahoma in the southwest; and California, Washington, and Oregon in the far west.

Here is a pumpkin fritter recipe. 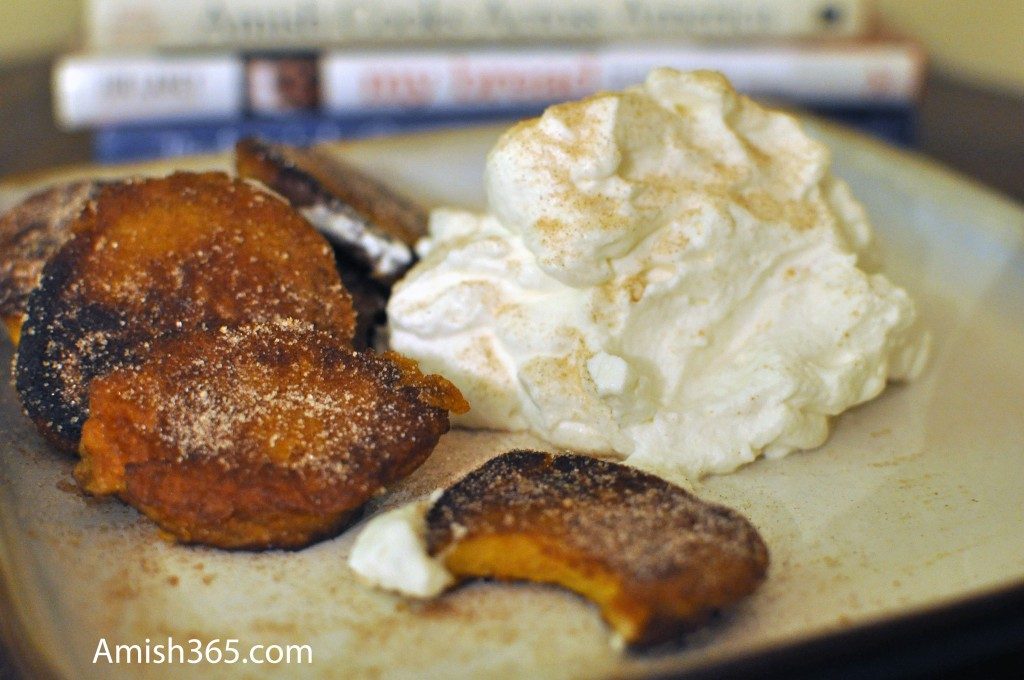