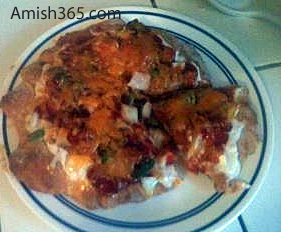 Captions:  mouth-watering homemade barbecue pizza (made and photographed by reader, Donna. Thank you!  And Daniel Yoder makes wonderful quality dresses, desks, and other wood crafts, including this tiny rocker for their daughter Julia which sits in their living room)

Dear Friends Both Far and Wide,

Hello from Flat Rock, Illinois! We're having a full, yet interesting week. There are two things I'm especially looking forward to for this week. One is a brand new armoire my husband is making for my birthday and the other is a new pony that will be arriving on Friday. Hopefully in a week I'll be able to fill you in on more details about the pony. 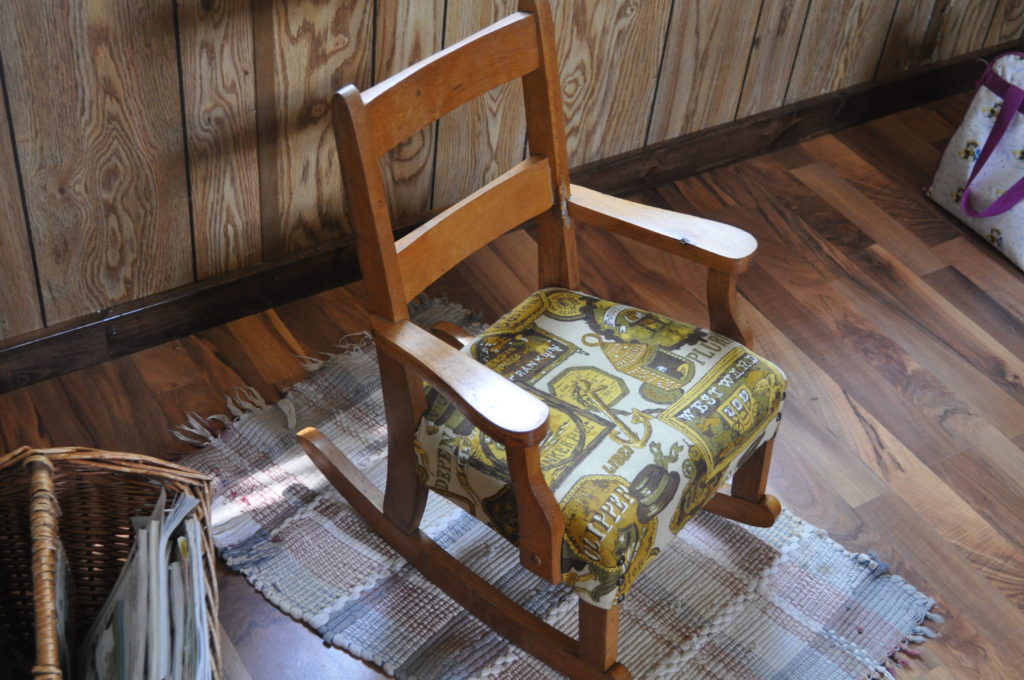 When my husband Daniel asked me what I'd like to have as a birthday gift from him I just didn't know what to tell him. All at once it clicked. I said I'd be thrilled to have a new armoire for all our winter coats, jackets, shoes, etc.  I told him that would be a large enough gift for me to last for two birthdays! Now with fall here and winter just around the corner we began discussing how big to make it, what kind of wood to use and what style to make it. With Daniel being an expert at building furniture he was full of good ideas and did a wonderful job designing a print for it. On Monday he built, stained and finished it. Now it only needs to be assembled yet. With living in a mobile home, every square foot of space counts. This will definitely help us be more organized and efficient since we don't have an entrance or closet for winter garb. By tomorrow evening it will probably be ready to be brought into the trailer. Then, of course, the fun part follows: filling it up! It will have a rod for coats and jackets as well as seven drawers for smaller items. Julia is all excited about having a drawer of her own for her jackets, scarves, and pink little gloves.
Tomorrow evening we plan to have Daniel's Sunday school class here for supper and the evening. Perhaps the boys will be able to help him bring the armoire in.

Talking about Daniel's Sunday school class, you may or may not be familiar with our Sunday schools. I'll try to explain. Every other Sunday we as a congregation gather for church services. On the" in between" Sunday we again all get together for Sunday school. After singing several songs one of the men share a brief devotional and lead in prayer. Next the children split up into several groups going into separate rooms with their teacher. Each class has a different workbook. The youngest ones have a Bible story and picture to color that goes with the story. They also have a Bible verse to memorize. The oldest classes have booklets that tell them which chapter to study as well as questions they have to answer about their chapter for the day, along with a memory verse.
While the children go to their classes the remaining part of the congregation has a chapter that is read by one of the ministers followed by a discussion by the men and boys about the chapter.

Sunday school teachers take turns by trading off every half year. Right now it's Daniel's turn. He is teaching the 12-15 year -olds. He enjoys his class. We decided to invite the children to our house for supper while the weather is still pleasant enough to be outside. We want to build a fire on the deck and eat supper out there. They also plan to help Daniel remove some cockleburs that we have in our pasture. So that will also give Daniel a lift.

I think I'll make pizza for their supper. Seemingly that's something that most people like. I'll share one of our favorite pizza recipes with you. Instead of using pizza sauce, you spread the crust with barbecue sauce.
To me one of the biggest secrets in preparing a tasty pizza is making sure it's moist enough by not overbaking the crust and adding plenty of sauces. Daniel has sharp taste buds especially with spices so he likes it when I use plenty of seasonings as well.
Of course, ingredients may be added or omitted according to your taste. In the sour cream mixture I like using onion powder as a seasoning, along with salt and garlic salt.