Goodmorning, the children are all sleeping so I'm seizing some quiet moments to get in touch with you. I'm writing in response to Norma, from London Ohio, who wrote that she would be interested in hearing how I began my walk with the Lord. As I think back over my girlhood days I could just stare into space, reliving so many memories. Tucked among those memories are the times when I had something on my mind and I would ask Dad if he'd have a couple minutes so we could talk. As a very young girl I was super sensitive and had a tremendous fear of telling the untruth to someone, "After all, I want to go to heaven when I die," I would tell myself time and again. So I would ask Mom or Dad questions like, "What really is telling a lie?" They patiently explained that it is when I purposely put someone on the wrong impression, but also hastened to explain that all children go to heaven, and as I get older I would be accountable to God and as a child I remain accountable to them. As the years progressed my mind kept revolving more and more around the things of God. I remember especially one day as I was doing basic house work when the verse, "For all have sinned and have come short of the glory of God. Romans 3:23," became a reality to me in a new way. I knew that unless my sins are all under the blood, no amount of good works could save me. I simply went into my bedroom, kneeling infront of my desk and told God that I need him, and that I am sorry for any sin in my life, and asked for the cleansing power of God. Though it was not a dramatic experience, I knew that God does make us his children as we come to him in sincerity.
A couple weeks later my brother Javin, who is a year older than I and my hero since girlhood days, was cooking maple syrup, in the woods behind the house. It was supper time and he was the one to keep watching the fire while the rest of us ate supper. I had a brilliant idea, "Mom, may I go take supper back to Javin then the two of us could eat in the woods?"
"Yes, that would be fine," she replied packing our food.
Soon the two of us were sitting beside the crackling fire as the steam billowed from the sap as it merrily boiled away in a large pan. "How's life going for you?" Javin asked in big brother fashion.
"It is going well, in fact, recently I made a commitment to follow Jesus."     "That's wonderful," he responded. Javin was the type person I idealized in so many ways, including the example he left for me. It was a reality to him that expecting to go to heaven meant more than an initial commitment, but a constant walk with Jesus. After a quality discussion which I still treasure in my heart, the rest of the family joined us by the fire side. The stars twinkled brilliantly, my heart overflowed with gratitude and awe, deeper than words explain. Someone suggested we sing some songs, which delighted me. Soon we were singing my favorite, "There's a deep settled peace in my soul". It fit exactly what my heart was overflowing with.
Yes, I have faced many a rough spot in my life since then, but amazing grace keeps carrying me through life, one step at a time.
Mom had brought a pan of cinnamon rolls to the woods for a dessert for everyone. In my mind they're always best fresh, or second best, at least warmed up. Someone suggested that we set the pan right into the sap and allow it a couple minutes to warm the cinnamon rolls for us. Wow, it worked amazing! Soon we had warm cinnamon rolls, thanks to the sap for heating them and to Javin who faithfully kept adding more wood to the blazing fire!
This cinnamon roll recipe has been a family favorite for years. Dad was always tickled when we made them, now I enjoy watching my husband's face light up with delight as he spots fresh cinnamon rolls on the kitchen table. His sweet tooth likes having plenty of frosting, while my Mom always prefered a minimal amount.
By the way, if any of you have something that you'd like to share that God has done for you or have any questions feel free to drop a note in the mail. We love hearing from readers! 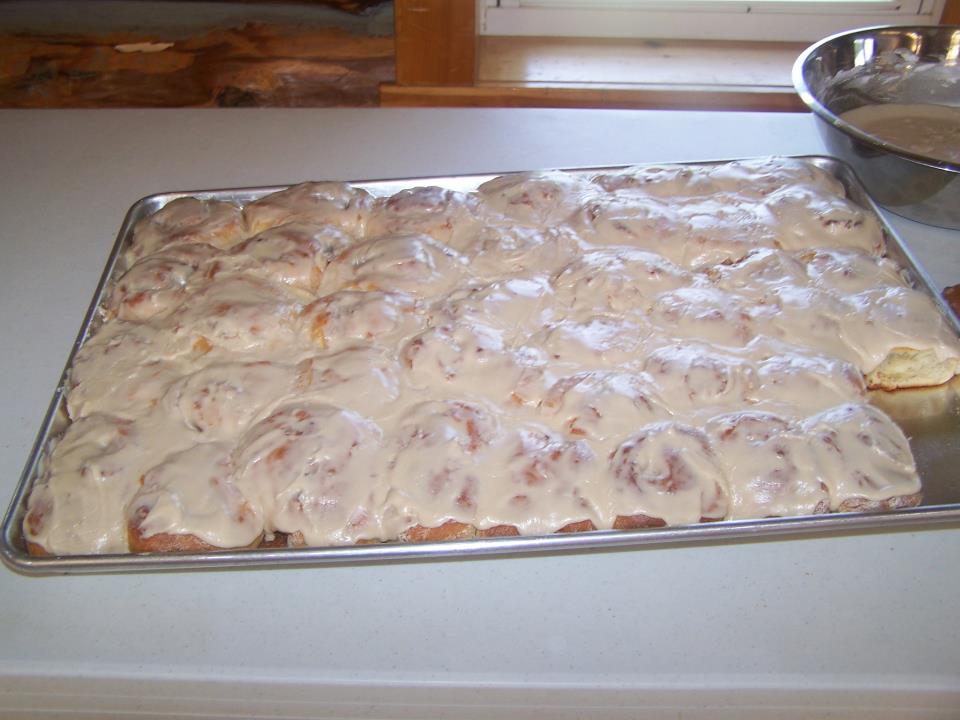 Amish Caramel Cinnamon Rolls...These are not Gloria's, but they are similar to what hers would look like.

Tips:
* My mother taught me to roll the dough out in a couple different batches, then roll it as thin as possible to have plenty of cinnamon and sugar in each bite.
* After placing cinnamon roll into cake pan, give it a couple pats on top to keep the center from popping up during rising time.
*Frost rolls while still just a bit warm. It will produce shiny rolls.