I was doing research on something and stumbled upon a blog post on someone's blog from 5 years ago.  It looks like the blog is now pretty much defunct but I found the topic quite interesting and wanted to share it with everyone.  A few disclaimers:  I've never tried the remedy so I can't vouch for its efficacy. Also there are some key questions the blogger leaves unanswered...questions like: how often do you take the remedy? How long does the mixture need to sit before use?
Do you store it in the fridge?   So consider these questions before trying it.

I was able to ascertain that the blogger resides in western Wisconsin so she if got this concoction from an Amish family, it would probably be a very conservative Amish family.  Most of the Amish in this area are pretty conservative.   Now, one question that some people will immediately ask:   "I didn't know the Amish consume alcohol?"   There's nothing in the Amish religion that prohibits alcohol consumption.   The rich German heritage of the Amish creates a culinary cultural connection with beer that is quite natural.  I've  observed Amish drinking anything from cheap beer from the local liquor store to homemade dandelion wine.   There is, of course, a lot of real estate between alcohol use and alcohol abuse.  Some Amish settlements seem to have bigger problems with drinking among their congregations than others.

So, in answer to the inevitable questions: no, alcohol consumption is not taboo among the Amish.  So back to this cough syrup.  I find this recipe fascinating because of its alleged Amish origins.  Anyone brave enough to try it?  Sheesh, with blackberry brandy and peppermint schnapps as ingredients I'd say it probably would get rid of your cough and put you right to sleep!   Click here to view this blog post that gives the whole recipe and photos.  I think I'd have to be practically coughing up a lung to want to give it a try. 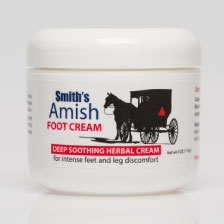 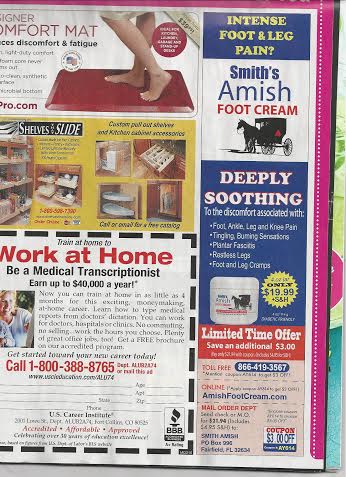 Well, regular readers of this blog know that I completed a 20-mile hike on Saturday.  My feet and legs were about as pained as they'd ever been.  Sheesh, that might have been the time to try this product that reader Joyce called to my attention: Smith's Amish Foot Cream.  If the stuff would soothe my constantly cracked heels I'd use it and endorse it in a heartbeat, but it doesn't appear to be advertised as a moisturizer but as a "soother" of sorts.  Anyone tried it?  Gee, they even have a website.  I have my doubts about much of an Amish link  to this product.  I don't have any problems with a product or person who has a genuine Amish connection using it in marketing.  But creating a connection that's not there?  Not saying Smith's is doing that, maybe they got this foot formula from an Amish person, but I have my doubts.....