This is one of our occasional whirls through the online marketplace Etsy in search of everything and anything Plain or Amish.  And I came up with some interesting stuff this week!

BLUEBERRY SHORTCAKE CREAM CHEESE WHOOPIE PIES:  These look and sound amazing. One of these days, I am going to order one of these Etsy food items. Really, I will.  But for now, I'll just admire from afar.  Click here to see these amazing creations. If anyone orders one, let me know. 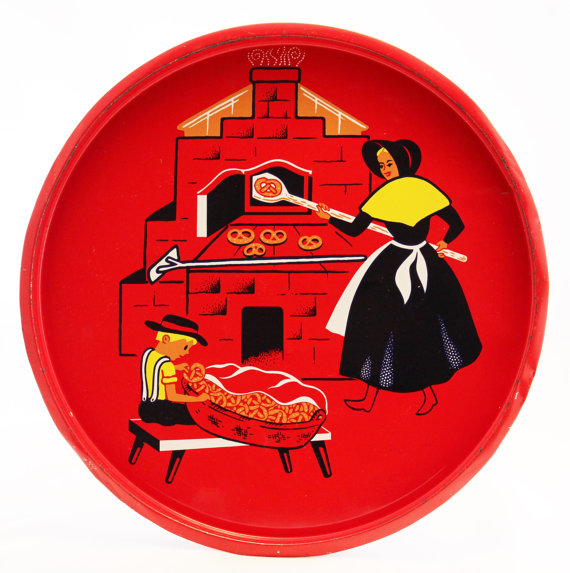 AMISH SERVING TRAY:   Years ago I took a class in college that was fascinating, it was about folk art, especially rural folk art. Rural folk art can be kitschy, but it also does a superb job of capture the tenor of the times.   This is a fascinating piece of folk art depicting an Amish woman and her son removing pretzels from an oven.  I'd love to know where this tray was made, how it was, where it was sold, etc. All that information is missing.  I may be wrong, but my guess is that this tray is worth more than $5.  It just seems like such an authentic piece of mid-20th century folk art depicting the Amish likely before they became such tourism "stars."  Perhaps someone out there has this tray and can tell us more?

VINTAGE COOKIE CUTTERS:  Wow, this is another piece that if I had unlimited resources (Okay, it's only $19, but you have to draw a line) I'd snap up.  This is a boxed set of vintage Pennsylvania Dutch cookie cutters.  The seller doesn't think they've ever been used. I think this is under-priced probably also.  Owning these would be like owning an actual slice of Pennsylvania Dutch history, it just would be an amazing addition to anyone's kitchen collection. Take a look at these beauties.

PENNSYLVANIA DUTCH BOOK: This is a book that would be fascinating to own.  Published in 1950 it's a primer about all the different Pennsylvania Dutch groups and how they are connected. I think it'd be a fascinating title to own. Click here to see the book.

PENNSLYVANIA DUTCH COOKBOOK:  I guess the them this week is Pennsylvania Dutch.   I had not seen this book before.  It's published in 1965 at the sort of height of the initial surge in interest in the Amish and Pennsylvania Dutch.  This book seems to meld together traditional Pennsylvania Dutch cooking with Amish, so I think the recipes in it would be fascinating.  Click here to see this cookbook.