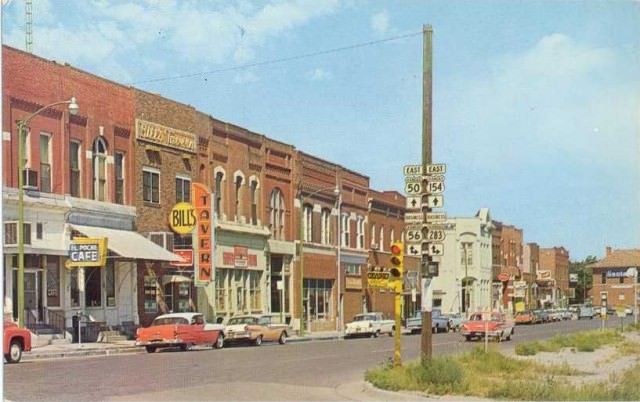 The Amish of Dodge City?  Wyatt Earp with a beard and broad-rimmed hat?

I’ve been to Dodge City at least twice.  Maybe three times.    Each time I was there to give talks or media interviews about The Amish Cook which, at the time, was carried in the Dodge City Daily Globe.  That newspaper, like many of its size, is getting smaller and smaller and is struggling, but, back in those days, it was one of the many newspaper voices of southwest Kansas.

US 50 travels a long, lonely route from Hutchinson, Kansas to the Colorado border, but it is a gorgeous drive.  I've made the sojourn several times and just find the area so awe-inspiring in its spatial vastness.  I'd love to go back someday. Would be fascinating to know what percentage of our readers are within an hour of Route 50.  I’d count myself in that group, it threads through southern Indiana and southern Ohio about 40 minutes away from me.  I savored every second I spent in Dodge City, it is one of those "oases on the prairie" and is so much more than Old West gun lore.  But one thing I didn't know (I take this back, I actually think we talked about this on Amish365 several years ago but I didn't know it then and then forgot about it) was that Dodge City was once home a thriving Amish community.  I stumbled upon a blog posting about it last night while researching something else, check it out here, some really fascinating headstone photos, etc.  The blogger does a great job in words and photos of describing the rise and fall of the Amish community there. It seems many of their descendants are still Amish and now live in Iowa.

There are many Amish settlements that have failed over the years for various reasons.  Amish historian David Luthy (he's a convert to the faith and lives in Canada, I've met him once) actually wrote a fascinating book about Amish settlements that fail and why.  There are a couple of copies available at good prices from Amazon, I'd encourage someone to snap one up.  When you go to that link, click over to where it says "third party seller", there's at least one copy available for $10.

Amish communities that fail tend to because they are too remote or there's theological infighting.  With the Dodge City community, it was just too remote.