Time for our weekly glance at anything and everything Amish in the news.

Let's get the ghastly done with first.  I've not posted a ton about this since it initially happened just because it's an unpleasant topic and I didn't want to have to think about it everything time I posted it.  But since the perpetrators are now headed for prison, here's an update:

KIDNAPPERS SENTENCED:  Two Upstate New Yorkers had the book thrown at them by a judge.   This twisted duo kidnapped two Amish girls from a vegetable stand last summer, abused them and then released them when they got spooked by the media attention.  Now they will spend the rest of their lives behind bars. Click here to read how it all unfolded.

MILLIE OTTO IN A BUGGY BIND:  On a far lighter note, read about Illinois  Amish columnist Millie Otto's buggy troubles as she went into town on a recent day. Click here to read.

275 POUNDS LATER..:  I first saw this story in People Magazine but a few things struck me as "off" so I did a little digging and found a better, more thorough, story to share.    The story that People Magazine reported, in short, was Old Order Mennonite woman joins Weight Watchers chapter, loses 275 pounds and leaves church.   And that was pretty much it.  Bunch of things jumped out at me.  First clue: the woman's name is Jennifer Butters.  Now I do not profess to know every Old Order Amish surname out there but in 25 years of studying Plain cultures I had never encountered the name "Butters."  Then there's the joining a group like Weight Watchers. Very unusual for an Old Order member.  Such associations are typically frowned upon.  And then there's being 275 pounds overweight in the first place. While there are certainly overweight - and even obese - Plain people,  they are a decided minority.   Also, People Magazine showed several pictures of Jennifer Butters and her husband dressed in Plain attire, these pose-type photos would be very unusual.   So, turns out, Jennifer and her husband joined the Old Order Mennonites back in 2002 as converts who never really quite fit in.    This fact doesn't make the story any less compelling (maybe it makes it more compelling), but it does make more sense.  Would love to know how they chose to move from Indiana to Pennsylvania.  If I were going to convert, there'd be plenty of places in Indiana I'd have looked at first.....Anyway,  click here to read the whole story.  As an aside, kudos to the woman for losing 275 pounds.  I'm simply trying to lose 30 and can't see to make progress! 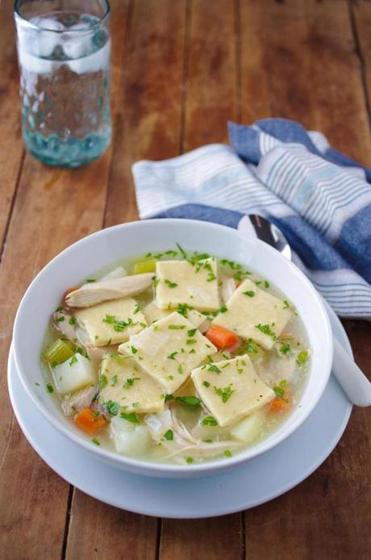 PENNSYLVANIA DUTCH POT PIE:  The Boston Globe printed what seems like a very authentic, straight-from the farm recipe for true Pennsylvania Dutch Pot Pie.  For me, pot pie was - and still is - what it was while I was growing up: a frozen, Swanson pie filled with veggies and chicken that came out of the oven way too hot to eat for awhile.  You had to vent the crust with a fork to try to let some of that heat escape unless you wanted your mouth burned to a crisp.  But pot pie means something totally different in Amish and Pennsylvania Dutch culture. Read the Globe article and recipe here.