A lot of interesting Amish in the News today, so let's get cracking:

PINECRAFT POST OFFICE:  I thought I was done with Pinecraft stories until next fall (for those new here, Pinecraft is the "Amish snowbird" haven in Florida that is packed to the gills with sun-seeking Plain people all winter and it empties out in spring and summer).  But, anyway, the Sarasota paper has a really interesting story that captures the true heart of Pinecraft: the post office.   In an age of social media and email, the Pinecraft post office still remains a central gathering place for exchanging and receiving information.  Yes, things are changing as even the Amish become "wired", but the Pinecraft post office continues to occupy a central spot in the community.  Read more here. 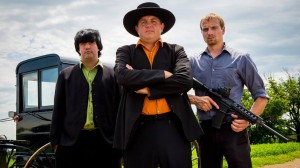 Lebanon Levi star of the fake show , Amish Mafia. The show is no more real than Star Trek or Bewitched.

LEBANON LEVI INTERVIEW:  Sometimes the media can be so gullible.  The Pittsburgh Post-Gazette (which, really, they should know better) ran a fawning interview with Lebanon Levi of Amish Mafia fame.  SIGH, once again, the show is FAKE.  There's not one iota of reality to the "reality" so if the entire show is fake it's really hard to take anything said in the interview, or this guy's book, seriously.  But, just for laughs, you can read the interview here.

ORANGE TRIANGLES:  This is an issue that comes up again and again, but National Public Radio's northern New York affiliate explores the issue in decent depth in this piece.  The issue is rising to the fore again in New York's North Country because their Amish population really is growing there.  Click here to read the piece.

ADULT ENTERTAINMENT:  I'm sharing this article more as an example of how the Amish are, for a variety of reasons, often an irresistible draw for the media.   A "gentleman's club"  (I'll be honest, and I don't know whether this is something I should be admitting publicly or whether this somehow makes me a laughing stock among the guy crowd...but I have never been to a "gentleman's club" so I can't provide much insight into what goes on there, but use your imagination...I'm assuming stripping/dancing...I don't know ) is opening up smack in the middle of Oklahoma's Amish country.  I will admit that out of all the places to put one, this does seem to be an odd spot.  But I can almost bet you that if it were in almost any other spot the media would all but ignore it.  But if there's an "Amish angle" at all to the story, the media will work it.  Click here to read about the gentleman's club.

FISH STORY:  This entry is more interesting for the photo...a reporter for the Springfield, Missouri newspaper encounters an Amish fisherman and a buggy with a kayak strapped to the top. Read more and see the photo here.

Lebanon Levi star of the fake show , Amish Mafia. The show is no more real than Star Trek or Bewitched.

We check in again with Amish columnist Millie Otto who writes about her life in the Arthur, Illinois settlement. Her column appears weekly in the News-Gazette in Champaign.  This week she shares a recipe for "Rhubarb Icebox Dessert".  Yum!