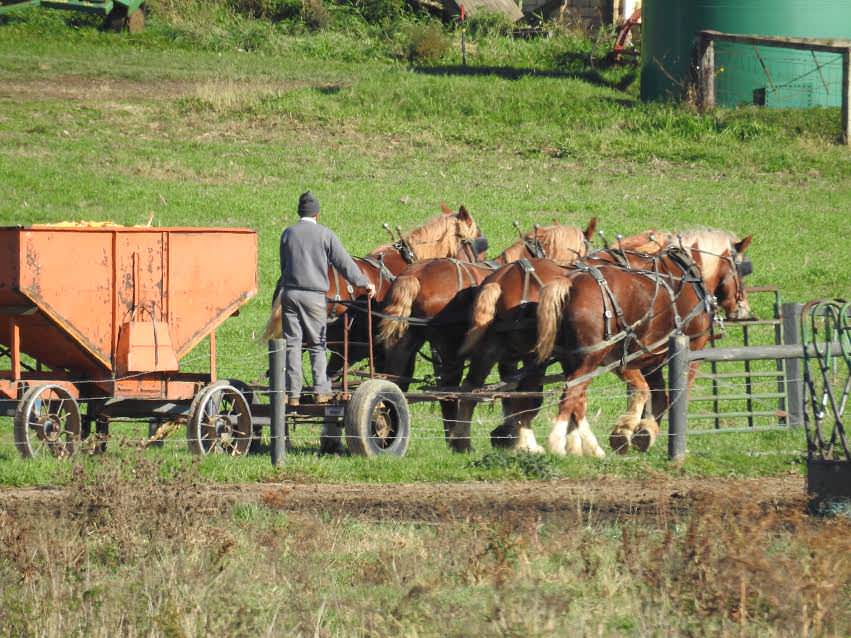 Most Amish in Holmes County, Ohio still farm with horses, but some more progressive groups do use tractors.

The British tabloid The Sun had a photo spread this week that trumpeted a "rare glimpse" inside the "famously reclusive" Amish culture.  Part of that is typical tabloid shtick.  While photography among the Amish is still the exception rather than the rule we aren't dealing with a caveman culture.  The Amish are out among the English each day, with elements of them participating in film and publishing projects.  So while The Sun can pat themselves on the back for some wonderfully insightful and rich photos, I think calling them "rare" is a bit of a reach. But that is just my take on it.  That said, the photos are very interesting.  Personally, these photos evoke a lot of mixed emotions in me. I've experienced most of these scenes first hand and some, I do use the qualifying word some, of the Amish are among the best, most good-natured, salt-of-the-earth people I've ever met.  And these photos capture that. I LOVE the photo of the man eating breakfast, presumably by himself, early in the morning.

I'd be very curious as to WHERE these photos were taken. Well, we know it's Holmes County, Ohio but there is such a rich panoply of Plain in this part of the world.

I had to chuckle a bit when I read that these photos from a British photographer were assembled while covering the Presidential campaign of Rick Santorum. No wonder he lost, if he was spending his time canvassing for Amish votes, he was barking up the wrong tree. They generally don't vote!  Anyway, click here to view the whole photo spread from The Sun.

« What do you think of JCPenney? And 40 JCPenney Stores that Might be Closing
Two-Newspaper Towns, Are You In One? »