Okay, we've got more Hutterites in the News than Amish today, but still some interesting reads.  Hutterites are an Anabaptist group very closely related to the Amish theologically.  They originated in Europe during the Reformation.  The Hutterites derive their name from founder Jakob Hutter.  The single-biggest different between the Amish and Hutterites is the true communal lifestyle that they lead.  They also embrace more technology to advance the good of the colony.  No one really owns anything on a Hutterite colony, it's all the group as if they are one large, functioning organism. Like the Amish, the Hutterites are pacifists who speak German as their first language.  But back to the Amish for a sec:

AMISH AND VACCINES:  Do the Amish vaccinate their children?  This is a very individual, personal decision, not a "church" decision, so you'll see a wide variation among the Amish.  I think, as a general rule, though, the more large and progressive a settlement is the higher childhood immunization rates are.  Read this Michigan nurse's take on the issue.

MENNONITES AND STEEL WHEELS:  Oh, geez, this same community is back in the news.  We covered this extensively here back in 2011.   To recap:  Mennonites in Osage County, Iowa have steel wheels on their tractors.  The thinking is that rubberized wheels would allow for farm equipment to be used as "transportation" instead of for farm work. That hasn't stopped some Mennonites from taking their tractors into town or on errands and that, apparently, is chewing up the roads.   Local authorities are issuing tickets to the Mennonites for violating state laws prohibiting steel wheel use on roadways.  On the other hand, one of the Mennonites who fought a ticket in 2011 all the way to the Iowa Supreme Court had the case turned back saying that it was a "local matter."   The two sides have agreed to talk but it just seems like this drags on and on....

EDITOR'S PICK - HUTTERITE PICTURES:  this is a superb read, an excellent article about the Hutterites in general and a wonderful sampling of photographer Jill Brody's images capturing life on a Hutterite colony.  You won't want to miss this.  Click here for these wonderful Hutterite images. 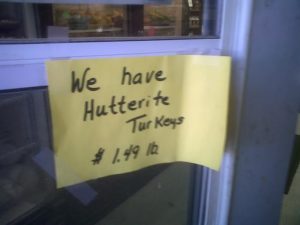 Hutterite turkeys are one of the most sought-after delicacies around Thanksgiving in Montana.

HUTTERITE TURKEYS:  Thanksgiving is over but maybe there are some leftover birds to be found somewhere that you could snap up for Christmas. Otherwise, try to snag a Hutterite turkey for next year's Thanksgiving meal.  In Montana, they are all the rage.  I saw this sign on the door of a small meat market when I was in Montana back in 2011.

HUTTERITE POWER STRUGGLE:  Geez, this would be awkward.  What if a Hutterite colony splits philosophically and you have one faction aligning with one elder and another faction aligning with another?  That is exactly what is happening in one South Dakota colony.  And since they all live together on a colony its not like you can just easily leave.  This group is either going to have to patch up their differences or somehow initiate a messy divorce.  Things are already messy. Read more here.