I want to get caught up on some of the Amish in the News that has accumulated over the weekend.  Today's news has a definite theme to it in terms of the Amish and public safety.  Let's start out with what has turned out to be an ugly story out of Upstate New York.  A non-Amish couple abducted two Amish girls from a farm-stand and then, prosecutors say, sexually abused them before they escaped.  That's the heart-breaking part. I am so thrilled they were found and are alive and reunited with their family, but, what a sleazy "couple" who orchestrated the abduction.   On the other end of the spectrum is the Amish family who are, in typical Amish fashion, expressing a spirit of forgiveness.

FARM-STAND SAFETY:   And, on a related issue, I have stopped at more rural Amish-run farm-stands and baked goodie tables over the years than I care to count. Often there are only a couple of young Amish girls sitting there collecting money and helping customers.  I have to admit that their vulnerability to a crime never crossed my mind until the abduction in New York.  Now it is on the minds of a lot of Amish farm-stands operators. Click here to read how Amish roadside farmstand operators in Lancaster County were reacting to the news of the New York abduction. 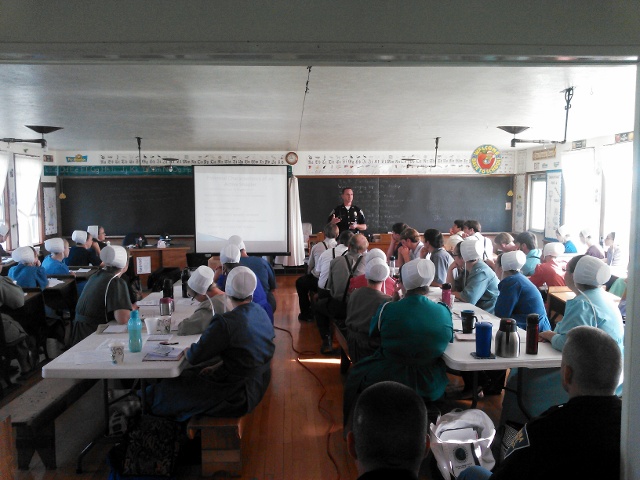 CAPTION: an Indiana State police office conducts a school safety seminar in northern Indiana this week before the start of school.

AMISH SCHOOL SAFETY:  And, continuing with our theme,  it's sad that Amish schools (or any schools for that matter) have to concern themselves with crazed gunmen.  But Amish schools, as was tragically driven home by the Nickel Mines tragedy years ago, are not immune from the violence-soaked culture of the rest of America.  But Amish schools remain vulnerable without the school resource officers, picture IDs, and cameras that are in other schools, public and parochial.  So an Indiana State Police officer decided to offer a safety seminar to Amish school administrators in northern Indiana.  Excellent idea, sounds like he was very respectful in his approach and was well-received!  Click here to read more.

MENNONITE FURNITURE:  And, on a lighter note, read about Mennonites who are now settling in the Two Rivers area of eastern Wisconsin and starting some thriving businesses.

« The Amish Cook: Heavenly Oatmeal Bars and a fun family reunion!
Dressing for the Amish »