We have a variety of Amish stories in the news this week, so let's get to it:

HORSE POOP:  This issue crops up from time to time and I always think it is a waste of time, it just seems like such a non-issue.  This is probably the first time, though, that I've ever heard anyone frame the issues in a way that makes some sense to me.  A business owner in Wesbter County, Missouri basically makes the point:  "If I'm out walking my dog and the dog poops in the street, will I get a ticket?"    If the answer is "yes" then why aren't the Amish being held to the same standard?  That is a powerful argument.  Seymour, Missouri is one of the largest Amish settlements in the Show-Me-State and...SIGH, personally, I don't' think horse poop on the road is an issue but I think this guy is making a strong argument.  Click here to read more.

WHITEFIELD MAINE'S AMISH POPULATION GROWING:   The Bangor Daily News - one of my favorite newspapers - has taken a special interest in the Whitefield community over the past couple of years.  Personally, I think there are other equally interesting settlements in Maine, but take a look here.

WHITEHALL, NEW YORK AMISH:   The Amish population is growing outside of the town of Glens Falls, New York.  Glens Fall is a charming town a the gateway to the state's Adirondacks (but I like Saratoga Springs better).   Anyway, click here to read an update about the growing Amish population there.

COUNTRY LANE BAKERY:  This northern Indiana Amish bakery doesn't get the headlines that Rise N Roll does, but it has its own devoted following.   Sour cream cookies with brown butter icing , anyone?  Read more about this place here. 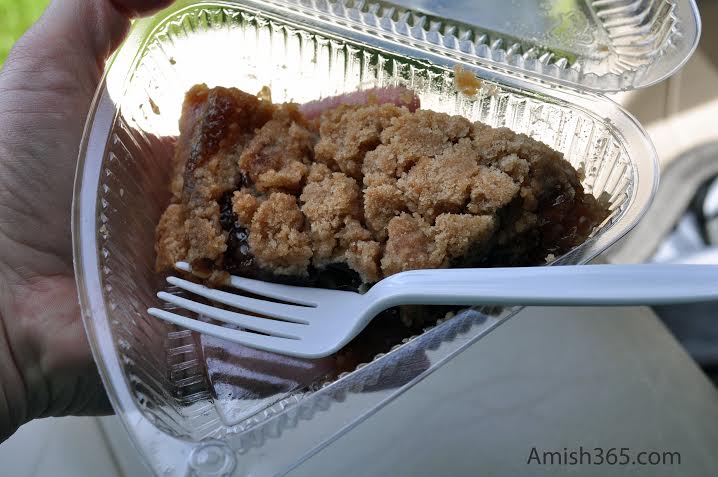 Dutch apple pie is a favorite among the Amish....

AMISH AUCTION DUTCH APPLE PIE:  The above recipe isn't Amish, this one, though, is.....mmmmmm, a good Dutch apple pie with a scoop of ice cream, that is about as good as it gets! Click here for the recipe.