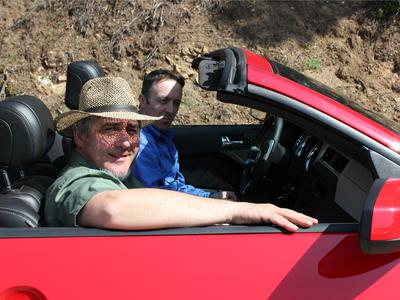 AMISH RENOGADES:  The concept is as old as TV itself:  find a "fish out of water" concept and film it.    The Harrison Ford movie, Witness, did it wonderfully.   But it doesn't have to involve the Amish to use the "fish out of water" concept. Pretty Woman did it wonderfully, Splash was another such megahit (literally fish-out-of-water) .  Now the DIY Network is hoping to use the theme - again. Here is how the New York Times describes Amish RENOgades:  SATURDAYS 10 P.M. (DIY) AMISH RENOGADES Robert Schlabach and Albert Miller, Amish craftsmen from Season 1 of “Vanilla Ice Goes Amish,” get their own show, traveling to Chicago, Las Vegas and Los Angeles to help homeowners with improvement projects while partaking of modern amenities not allowed in their religious community. In this first episode they convert a BMX biker’s outdated living room into a man cave. In their off hours they visit a pawnshop, go to a pool party and ride some rails.   Here's what Hollywood doesn't get:  there's a very narrow spectrum on which one can film an authentic Amish-themed TV show.  The reality - pun sort of intended - is that the vast majority of Amish people would never star in their own reality show.  Frankly, writing a newspaper column pushes the edge of the envelope for most.  The show could be the best show in the world, but it's not going to give you an authentic view of Amish culture. It may give you an alternate view, but not authentic.  The DIY Network's first attempt at an  Amish show was pretty good with Vanilla Ice Goes Amish.  That show focused on Vanilla Ice with the Amish as sort of peripheral characters.  This show Amish RENOgades, again, could be superb, but I'm dubious that the "stars" of it represent much in the way of authentic Amish culture.  Has anyone watched the show? If so, what did you think? This is a link to DIY's webpage about the show.

AMISH POPULATION INCREASING:  This is something we've been talking about on this site for years:  The Amish population doubles maybe once every generation.  Now, when the Amish population was relatively small years and years ago that doubling didn't much register.  But now as the Amish population is the hundreds of thousands fueled by a high birthrate (7, 8, 9 children or more per family is quite common), there is increasingly a scarcity of land among the Amish. So they are spreading out.  Amish settlements in far-flung places like Colorado and South Dakota are now the norm.  There simply isn't as much rural, available farmland in places like Holmes County, Ohio and Lancaster County, Pennsylvania.  This weekend, The Huffington Post reported on the trend.

AMISH ARMY:  Imagine being snowbound in your trailer park, hemmed in by 7 feet of the white stuff.  Hours turn into days and you can't go anywhere.  Your roof is groaning under the weight of the snow and you're worried it will soon be crushed like a tin can.  Then imagine how you'd feel if a fleet of vans arrived full of Amish men and women with snow shovels.  Hundreds of them.  That's exactly what happened in western New York this weekend courtesy of Mennonite Disaster Services.  Click here.

SEPTIC TANKS AND THE AMISH:   Maybe I'm changing.  I almost always used to side with the Amish on stuff like this.  But.....I don't know...we all have to follow the rules, basic rules to be part of a civil society.  Yes, the government overreaches way too much, is in our lives too much, etc, etc, but would disposing of waste water in ways other than just sloshing it out onto your land really impinge that much on their religious freedom?  These stories flare up from time to time, on this occasion the battle ground is southeast Missouri's ultraconservative Swartzentruber settlement where an Amish family is doing battle with county officials on waste-water disposal. Click here to read.

« Mystery Elephant of Dillsboro, Indiana
Visiting With An Amish Dollmaker »