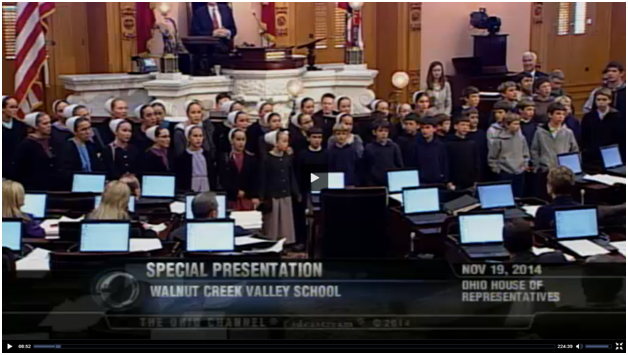 Welcome, get the latest news and recipes of anything and everything Amish by liking us on Facebook or signing up for our e-newsletter (or both!:)

Politicians in Amish areas have the tough job of catering to constituents that don't usually vote.  For instance, if you represent northern Indiana or Holmes County, Ohio you do represent thousands of Amish who live in your district, but they rarely vote.  It's got to be somewhat of a challenge.  The "spillover" population in such areas do vote, however.  What I mean by "spillover" are the large number of ex-Amish or generationally removed Amish.  Such areas usually have large numbers of Mennonites and evangelical Christians who have left the Amish.  In fact, if you look at the Ohio election map, Holmes County, Ohio went for Mitt Romney over Barack Obama by a higher percentage than any other Ohio county.  The "spillover" vote tends to be very conservative.

None of this is really related to what I am about to share, but I just wanted to give you some background.  Ohio state representative Al Landis's 98th district covers much of Ohio's Amish Country.  The name Landis is a common Mennonite name, so he probably has roots among the Plain people as well.   Recently a group of students from "Walnut Valley School" in Walnut Creek, Ohio  visited the ornate Ohio statehouse chambers to sing for the lawmakers.

The group was introduced - very articulately - by Amishman Marvin Wengerd, who identified himself as a parent at the school.  If I had to guess, it's probably Marvin Wengerd from the Amish-owned Carlisle Press.  Wengerd presented Rep. Landis with an "Amish directory" (which Carlisle prints...I've only spoken to Marvin on the phone, so don't know what he looks like, but I'm guessing it is him).  Marvin  did such an eloquent intro I'm thinking maybe he would be a natural to run for office someday!:)  No, just kidding, political participation by the Amish is rare.  You do occasionally see Amish people running for school boards, but that is about it.

The singing is such a treat (looked like a lot of empty desks there!) and must have been somewhat of a culture shock for the kids surrounded by the machinery of legislation, but I am sure it was a great field trip for the kids. I am trying to get some more background on how it all came about so when I hear back I'll pass it along!  Meanwhile, click here to enjoy this amazing Amish singing treat.