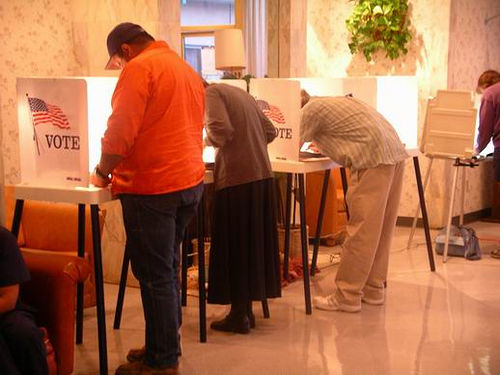 It is a key day in American politics today with mid-term elections in many states being held today.  Will the Amish be taking their buggies to the local polling station and lining up to vote?

This is a topic we tackle every couple of years on Amish365.com, but it's always good to do a refresher.    Here's how a middle-aged Amish woman answered the question when I once asked her if she votes in Presidential elections:
"Ha! We rely on you to put good people in office."

And that's it largely in a nutshell.  The Old Order Amish prefer to stay out of national politics.  There are just too many minefields that they could stumble into by participating.  Most Amish are strict pro-life in their views so if they did vote, they'd probably vote Republican.  On the other hand, the Amish are also generally strict pacifists.  And each of the last 5 Republican Presidents have been involved in some form of military intervention somewhere and that doesn't square well with a pacifist position.  Plus, there's the issue of defense budgets, national insurance programs, and social safety nets.  None of these square well with Amish beliefs.

There have been some attempts by the GOP to register Amish voters and with good reason. Ohio has a huge Amish population and often features very close results in Presidential races.  20,000 Amish votes going largely to the Republican party is an irresistible prize, but attempts at mobilizing Amish voters for Presidential races have largely failed.   By the way, I am aware of some Amish in northern Indiana who were very pro-Obama in 2008.  Northern Indiana was then mired in a terrible recession and many believed Obama's policies could bring relief to the battered RV industry.

One "Amish person" who will be voting Democrat today: Lebanon Levi of Amish Mafia fame.

The Amish WILL more commonly vote in LOCAL elections.  School board races, mental health levies and zoning issues are all items that have turned out Amish voters in large numbers at various times.  So if they see that participating in something on a very local level can have a direct impact on their lives, they'll participate.