The issue of photography and the Amish is a complicated one.  As a young journalist I was always taught to under no circumstances photograph an Amish person and that was an edict I happily respected and to this day that still is my "default position" when visiting a settlement.  When I was 18-years-old I was terrorized by tales of an Amish man who once supposedly grabbed a journalist's camera and ran over it with his buggy.  Whether that is a true story or "urban legend", I am not sure.  Plus, there's just common courtesy. Would I want someone sneaking a photo of me as I worked in my yard?   No.  Although I will say if someone took a photo of me from a distance, I wouldn't really care.  There are all sorts of "judgement calls" that enter into the calculus.  Plus there are differences among the Amish themselves and that is where it can get very confusing.  In the ultra-conservative Amish settlement of Ethridge, Tennessee they didn't want cameras anywhere near.  Not even photographing produce outdoors.  The Amish generally justify the no photo rule as being tied to a verse in the Bible about the "graven image", but that was the first time I had heard that applied to tomatoes!   Yet there are other Amish orders - and believe me, they are just as much Amish as the most conservative Swartzentrubers - who  don't have an issue with being photographed.  They interpret the Biblical verses differently.  Although most Amish still won't pose for a photo, they don't mind being photographed if they aren't posing, just documentary, everyday work.  And that is what you see some of below.  By the way, there are also Amish who personally don't oppose photography but their church congregation's official stance is against it.  It is not uncommon for these Amish to have a stash of photos hidden away someplace, perhaps keepsake photos of their children or deceased parents.

Now, this photo I obtained with permission.  This is Mary Troyer in St. Ignatius, Montana. Her son was unloading some produce from her cart. 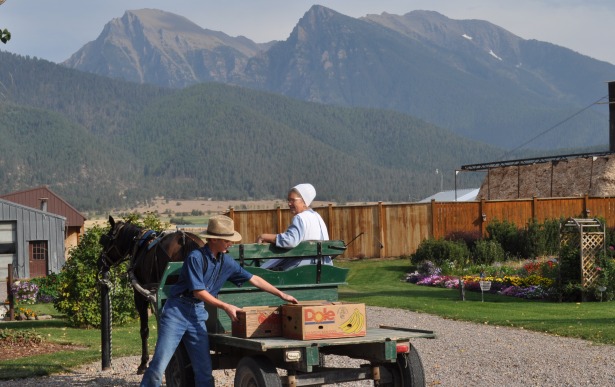 The next photo was from Berne, Indiana.   Should have I taken the shot?  SIGH, probably not.  But, in my defense, I took this photo from a long, long, long way away, maybe two football fields and I was shocked when I got home with the detail.   Interestingly, I heard from an Amish person who wasn't thrilled with the photo.  He/she had seen it on the website.  To this day I'm still not sure how people from such a conservative Indiana community saw it online so quickly. These are judgment calls and occasionally I get one wrong.  Below is an Amish man watching farm work and I took the photo with his permission. Now, there is something slightly different about him, the way he looks that is different than Amish most other places.  It's a little tough to tell in this photo, but if you look close enough you will see something. Does anyone have any guesses?  I'll give the answer next week. 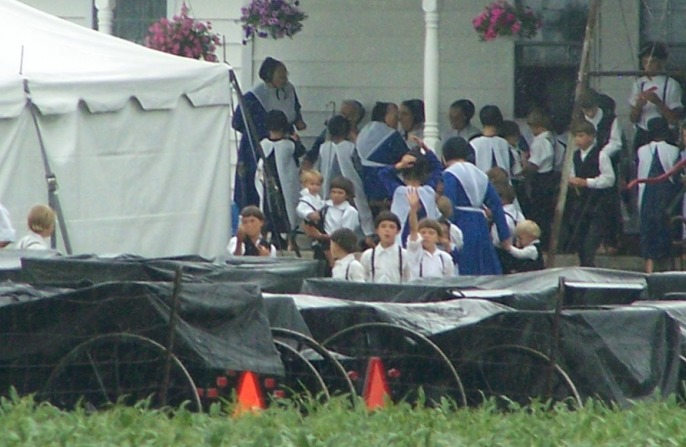