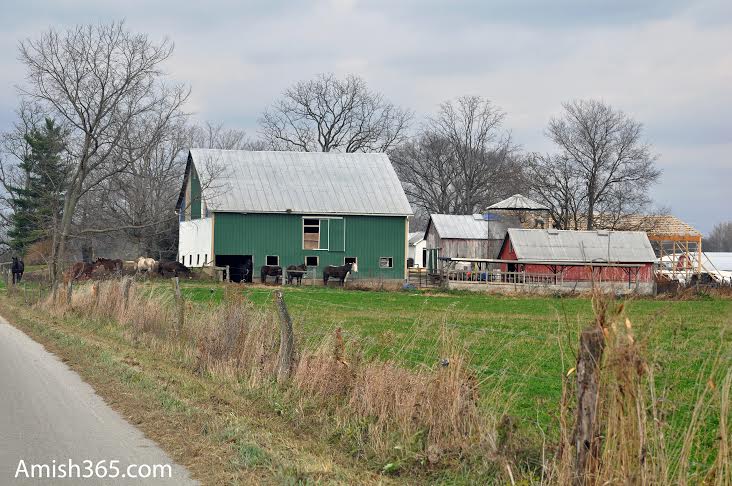 It was Saturday afternoon and Aster had fallen asleep in the car, so we decided to just drive around rural Wayne County, Indiana looking for something for me to write about and photograph for this website while she slept.   It didn't take long for us to stumble upon a "mini barn-raising" (you can see it in the photo on right side by the green barn)  About 5 Amish men were putting up the wooden frame of a small barn.  I'm always a little shy about just jumping out of my car and talking to strangers - Amish or non.  So at first I just drove on by, content to savor the scene myself. But then I said to Rachel:  "Sheesh, this is my job.  And those would be some amazing photos.  If I'm not going to go jump out here and talk to the people, when would I?"  So I turned the car around and pulled into the driveway.  Colorful laundry flapped in the wind as it hung on the house's porch.  Some loud dogs approached me from the house, but kept their distance.  Several Amish children, boys wearing big straw hats, scrambled into position to watch this stranger - me - ambling up the driveway. A tall, slender elderly Amish man with a flowing white beard, and wearing a lime green shirt with a crisp black vest and matching pants was standing on the concrete foundation of the barn using a circular saw.  As I approached him, I don't think he even looked up at me.

Feeling like I might be in over my head, I did a quick introduction of myself.  I usually have one of my books handy and typically a quick explanation of who I am and what I do causes the guard to come down and I most often have a great conversation.  Not this time.  As I talked, the man continued staring straight ahead as if me talking to him was paining him deeply or he was just very, very annoyed that I was interrupting his work.  Whatever his reason, I felt terrible.  Still do.  Rachel watched from the car some distance away and wondered whether I was saying anything at all, because the man remained stone-faced the entire time.  And as I kept talking with no response I finally said:

"I can see you're really busy, I don't want to bother you at all, so maybe I'll just go.  Do you mind if I get a photo of one of your buggies on the way back to my car?"

Finally, in a very measured, even tone, he said quietly:

But I had already made up my mind to just leave.  He clearly wasn't interested in talking to me and that's fine, I felt badly for putting him in such a position.  I love chronicling Amish culture, but I never want to put anyone on the spot.   Many older Amish (I'd estimate this man to have been in his 70s)  are especially insular in their outlook and having moved to Wayne County, Indiana to escape tourist-clogged Lancaster County, he probably was especially galled by my presence.  So this was a reinforcing lesson that the Amish remain a very private people, especially in non-touristy areas.  I usually try to stick to visiting places that have some business component (i.e. fresh eggs for sale, homemade jam, etc) and I think I'll stay with that plan!