Somewhere in Pennsylvania right now approximately thirty acres of corn or soybean field is likely being reseeded with grass.  Over the next year the grounds will be lovingly tended to and prepped for the arrival of the annual Old German Baptist Brethren Annual Meeting .  The conference is part family reunion, part church service, part picnic.

If you were driving the rural roads north of Lima Ohio this weekend you might have been startled to see a massive tan tent rising from what was once a cornfield.  It was easy to miss the tiny black and white, non-descript signs that read simply "Conference".   The farmstead of  Jesse and Melanie King was, for a few days, turned into a massive meeting of Plain people, a people often mistaken by outsiders for Amish.  But they are instead a very distinct and different thread of America's plain tapestry:  the Old German Baptist Brethren.  Women generally wear plain, solid-colored dresses and  men wear low-key denim and work-shirts or on church days a sharp black and white.

Rachel, Aster, and I spent Saturday at the annual meeting and I'll be sharing posts and pictures all week.

The most distinctive feature of the event is the tent, which moves from place to place and has been expanded several times over the years to accommodate the growing church.  The churches are filled with rows of hand-made, makeshift wooden benches.   We arrived at the Saturday service late but could hear the beautiful harmony of the a cappella music drifting across the fields.  Over 3000 Brethren were expected to attend the 4-day gathering. 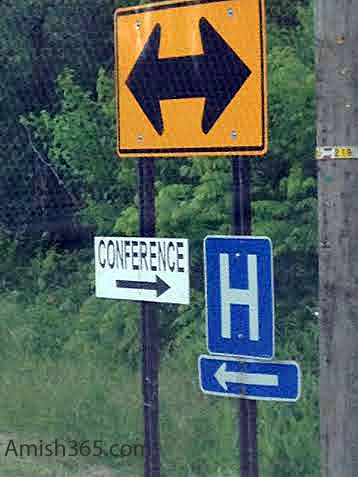 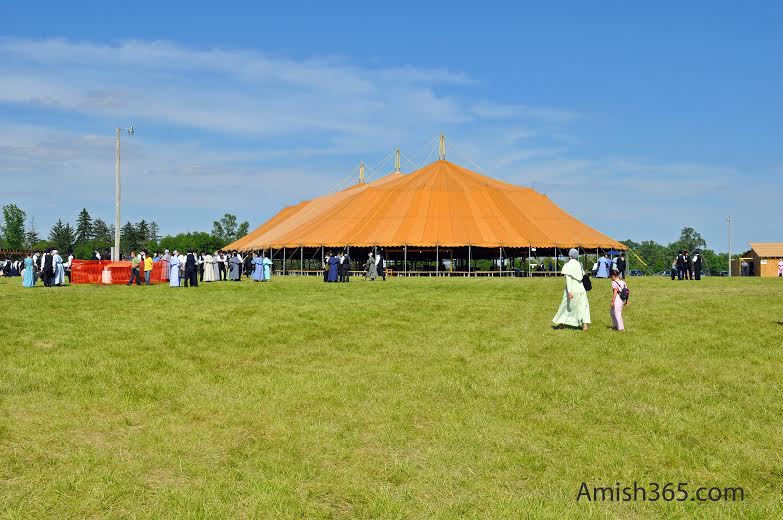 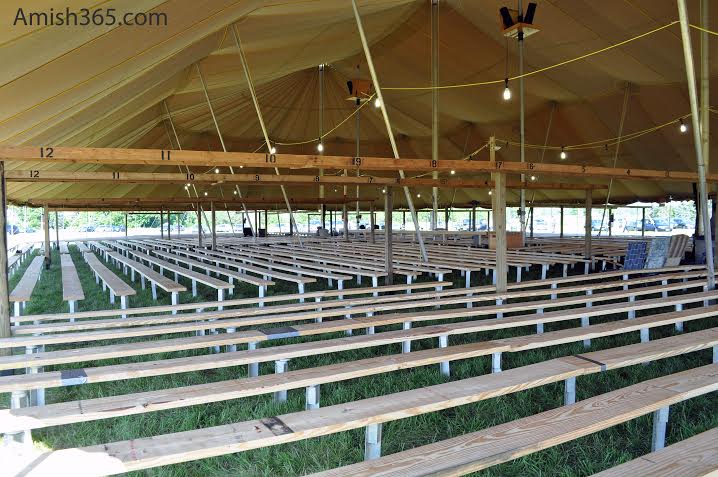 There were a number of tents, with the largest one being the worship tent.  But there was also a separate dining tent, concession tent, makeshift kitchen, and temporary restroom facilities.  Everything is built on-site from scratch for the sole purpose of this meeting.  I’m sure the organizers of the Olympics or the Super Bowl could learn a thing or two from the German Baptists because this event plays as smoothly as the most lovingly tuned violin.   There are motorized scooters and wheelchairs for the handicapped, a nursery for mothers with babies, a first aid tent staffed by Brethren with medical training, and fields of parking staffed with volunteers waving wooden canes to direct the cars (at night they switch to air-traffic controller style glow sticks).   And then each parking row is numbered, just like what you’d find at the airport or at an amusement park so you won’t forget where you parked.    And just where do you put up 3000 visitors.  There is a well-run, well organized lodging network in place which will be detailed in an upcoming post.

Like the Amish, there is no one person “in charge of the church.”  Unlike the Amish, though, there is an attempt to give the church a bit more structure and centralization through the election of a “standing committee” which will shepherd the church the year ahead (.  The standing committee is elected at the end of each annual meeting.  The annual meeting is also a chance to discuss and hash out any church issues which might come up during the course of a year.   Even the meeting’s location is an attempt to spread out the church’s authority instead of concentrating it.  The annual meeting’s location goes from place to place so no one community is viewed as the seat of “church authority.”  Each location hosts an annual meeting maybe every 25 years, although Lima’s last time serving as host was back in 1950!

CAPTIONS:  Above, signs point the way to the conference.   The church "big tent" rises from what was once a cornfield and inside the tent: benches, benches, and more benches.  By the way, everything (including the plywood boards that make up the benches) is auctioned off the Saturday after the annual meeting. More about that in an upcoming post.

Personally, I find the German Baptist church to be very endearing.  There are some Amish churches that I also find very appealing and that are my favorites, but the Amish church is so much larger and there are such vast differences from district to district (Swartzentruber, vs. Old Order, vs. New Order) that it’s sometimes tough to pin down the church’s identity.  The Old Order German Baptist Brethren church is smaller which by its very nature makes it more uniform.   We were welcomed and made to feel at home while attending the annual meeting and while its purpose is quite serious – to guide the church’s course – it’s also a time of socializing and renewing friendships.