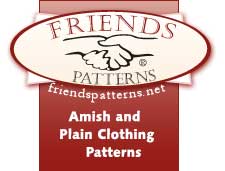 I'll admit that I know next to nothing about patterns.  I had to take a sewing class in the 7th grade (as part of my school's curriculum it was mandatory for all boys and girls) and I almost failed it. My fingers are too fat to properly thread a needle and I just...yea, I just don't know anything about this topic, so I'll stick to script. This business is owned by the Dingmans in Darke County, Ohio. What a fascinating personal journey this couple has made and I've really enjoyed getting to know Joyce Dingman and her sharing of their journey with me.   Neither was born into a Plain church but they gravitated towards the Brethren church in California and made their way east from there and now reside in Ohio.  I'll talk to Joyce again and perhaps share more of their personal story in some upcoming posts. Meanwhile, if you are in search of patterns to make Amish or Plain clothing, check out Friends Patterns here.  Here's a quick Q &A with Joyce!

How long have you been in business and how did you get started?

The business itself has been around since around 1986.  We purchased the business in 1996.  We are the third owner and have owned it the longest.Tell us a little bit about yourself? (i.e. where are you from? Family? Interests)

My husband and I are originally from California, the SF Bay Area.  We left there in '95 and after 18 months in Iowa, moved to Ohio.  We have two adopted children John, 19 nearly 20, and a daughter Irina 14.  John was adopted from Ukraine in 2000, and Irina from Russia in 2001.  I enjoy reading.What is your most popular pattern?We have a handful of patterns that are our core. The Ohio dress, chemise slip, bloomers, traditional covering and broadfalls, would probably be our most popular.What do you like most about what you do?With it being so difficult to find modest patterns from the major pattern companies, it is nice to fill a need.

« My Five Favorite Shows - What are Yours?
Amish Classic: Peanutty Squares »