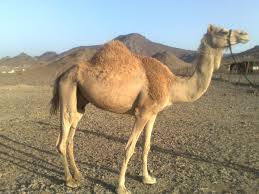 Fad foods come and fade.  Sheesh, in my lifetime alone there have been so many: fat-free, sugar-free, gluten-free, low carb, high carb, acai berries, agave, pomegranate...heck, I remember in the mid-80s when "oat bran" was all the rage.

I don't know what to think about food fads.  Medeterrainian diets  interest me because they are tried and true and have been around forever, fortified by olive oils and fish.  Far eastern diets also have an infusion of age-old ingredients that haven't come and gone.  I don't know - no one really knows - the secret to a long life.

My grandma is 89 and still cranking along even though she has broken almost every diet and lifestyle rule in the book (interesting, her Italian heritage infused her with an early-life Mediterraian diet) .

I did like the book Blue Zones that zeroed in on different "population islands" that seemed to enjoy greater longevity.

Anyway, a new food fad appears to be "camel's milk".  People are attracted to its alleged ability to improve executive and motor skill functions.  And ever the entrepreneurs Amish farmers are getting in on the fact. There are several Amish-owned camel farms now in Lancaster County and a handful in other states. Click here to read about the Amish connection to these traditionally Middle Eastern animals.  When I lived in Arabia as a kid (My Dad's job in steel sales took us there) camels roaming around there were as common as deer are here.