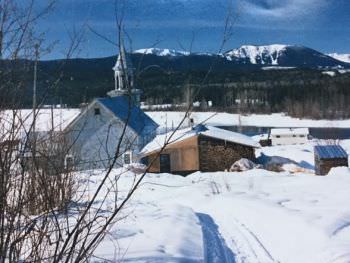 Where was this snowy scene snapped?

I was going through an old box in my office today, a box whose contents have survived many moves, many purges, many downsizes, and twists and turns.  And I found this photo.  Oddly, I knew it immediately what it was. I think I knew because of the context in which I found it, the other stuff in the box among it.  So, just for fun, to test this website's reach, can anyone guess where this photo was taken.  The exact spot?   I will say that this photo was taken in 1987.  If I had to guess the scene has probably changed very little since this was snapped.  I'll give it a day or two to see if anyone guesses correctly and then I'll share the background/context of this photo then.