A different sort of menu item has been popping up in some Burger Kings in Pennsylvania and on the East Coast this year.  The dish pays homage to Amish food history.  I'm not sure this fast-food giant is the best equipped to pay homage to any sort of food history, but I guess I give them a thumbs up for trying.  Is shoofly pie next at McDonalds?  Chicken corn soup at Wendy's?  I doubt it..... This is a photo by blogger Troy Smith of his recent chicken and waffle Burger King breakfast.    Have any of our readers run into this at Burger King? (I'm doubting many of our readers eat at Burger King,but you never know....)The verdict: soggy waffles and overcooked chicken. 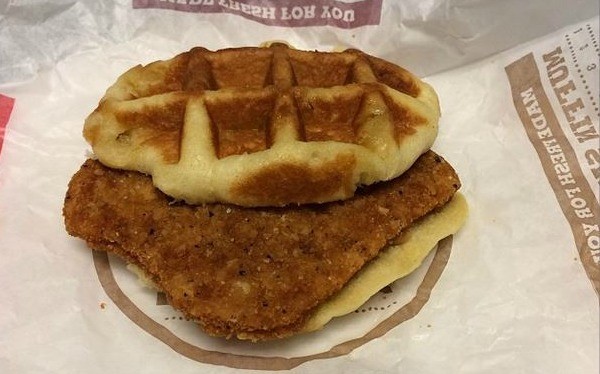 Chicken and waffles are a Pennsylvania Dutch contribution to American culinary culture.   Amish cooking is part of the rich Pennsylvania Dutch culinary tapestry, but it's just part.  Pennsylvania Dutch cooking is a melting pot of Hungarian, Moravian, German and other eastern European ethnic groups that creating their own food culture in isolated rural Pennsylvania.  Chicken and waffles has been a part of the food folklore, generally consisting of  a plain, sweet waffle with pulled, stewed chicken on top, covered in gravy.  There is an historically southern version of this dish that involves fried chicken, but the Amish version uses the stewed chicken usually.  I'm not sure what the pictured version is! Pulverized chicken?

According to food historian William Woys Weaver, in Philadelphia, where north meets the south, there is actually a "catfish and waffles" dish that makes the rounds.

Will the fast food joint's Chicken and Waffles be coming to a King near you?   Doubtful anytime soon, an emailed media statement from the restaurant says: "At this time, the chicken and waffle sandwich is something we are testing regionally but have not solidified plans beyond the test,” said Eric Hirschhorn, Burger King’s chief marketing officer, North America.