I'm always drawn back to this place....not sure why, perhaps it's just the pristine grounds,  the immaculate gardens, the stately old home, and the sense of history.  Sometimes, though, I think I'm drawn for more personal reasons, a sense of unfinished business, a wayward way-station in my elongated journey through Amish America, a place where history whispers and I can whisper back....

I've written on this site a lot about the old "Chrisholm Farmstead" near Trenton, Ohio, a preserved Amish-Mennonite farmhouse and grounds, lovingly restored to health by a group of dedicated volunteers.  Chrisholm is now under the aegis of the Butler County MetroParks. MetroParks has added programming to the grounds and a "nature play" outdoor area for kids.  Chrisholm is one of those places that looks truly different in each season, the angular brick of the farmhouse absorbs and reflects each day's light and color differently.  SIGH, how anyone can screw up a cell phone photo? I don't know, but my chance at getting the Chrisholm farm cloaked in snow was booted because somehow my photo didn't turn out.  Thumb over the lens, I think....

This past Sunday I found myself at Chrisholm again, this time taking my daughter Aster to a children's nature program held in the old Amish farmhouse.  Aster made a quick friend with a little girl named Penny whom she met  there. I love how at that age they can make such fast-friends.  Had I stopwatch, it probably took all of 10 minutes for Aster to have  declared Penny her BBF.  They headed outside to sit in the rockers on the front porch and sampled the snow-covered nature play area while Penny's mother and I kept pace.  I also channeled Christian Augspurger, like I had so many times before and considered my own sometimes swerve-filled journey through Amish America and how much having children of my own has enriched and changed the journey. I looked longingly at the rocking chairs on the wind-whipped front porch, wanting to sit a spell...but the day was cold and the children energetic.  I long ago decided that when I'm 80, this is a place I will visit often to rock away the hours and just think.

There's something poignant about these fleeting friendships made by children.   Aster will make a deep and quick bond with a child over a swing set or a game of tag at a playground only to say goodbye 30 minutes later, never to see the new friend again.  I think, though, that sense of unfinished friendship bothers me more than it does Aster....Anyway, some scenes from my Chrisholm Sunday....I guess I'll need to go back so I can that farmhouse picture in the snow! 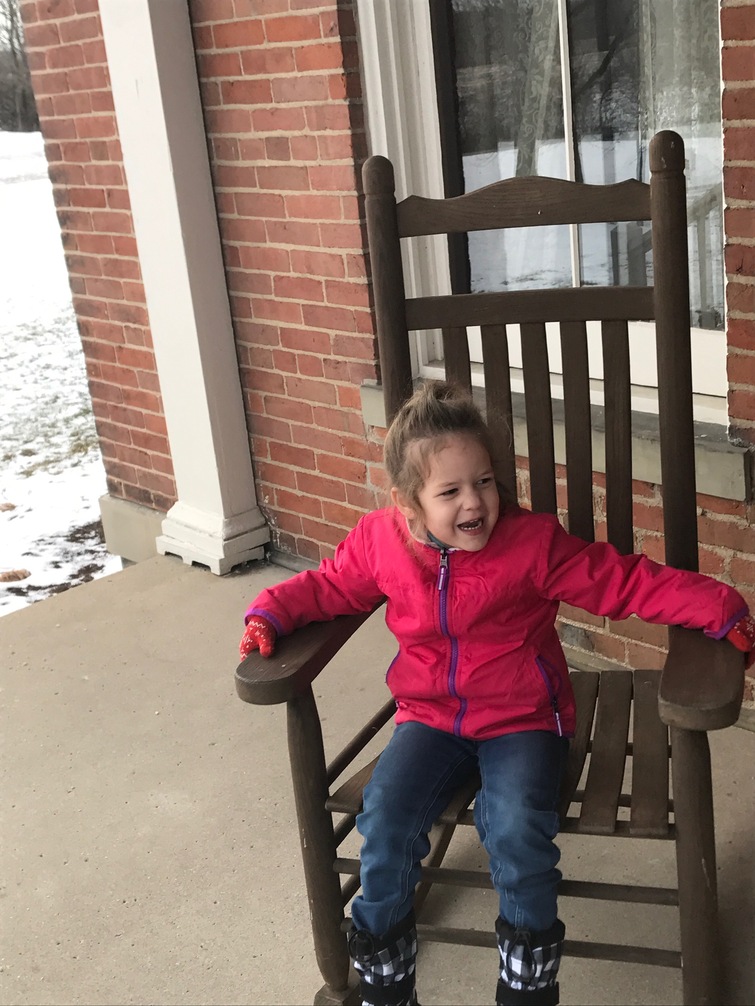 Aster tries out one of the inviting rockers on the porch of Chrisholm, rockers that are much more inviting when it is 70 degrees. 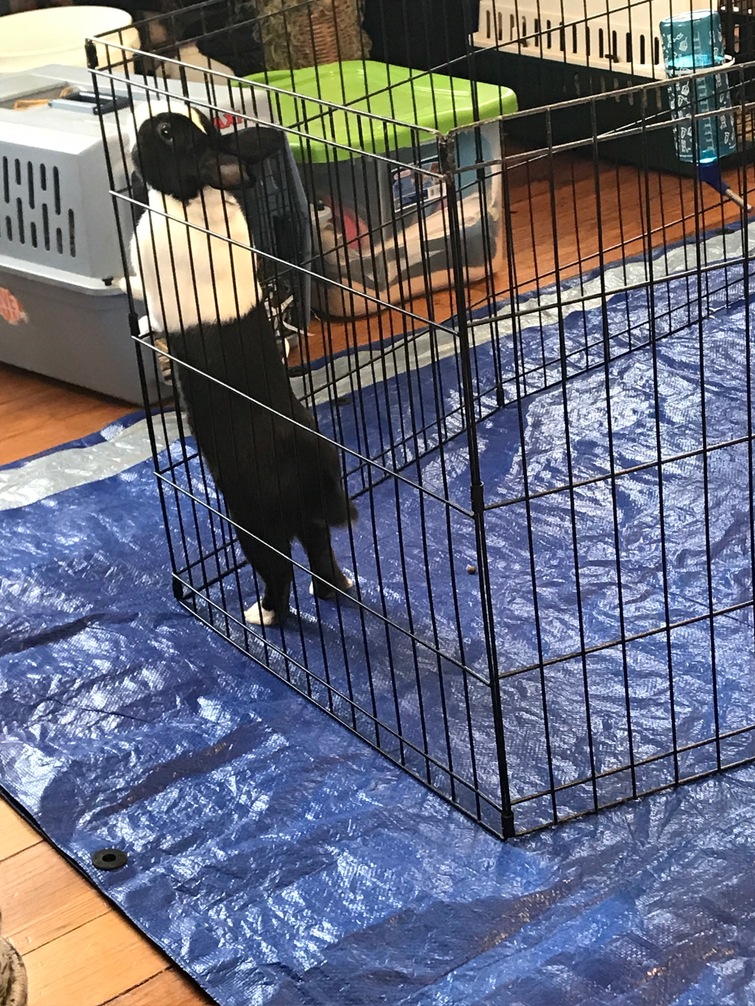 Rabbits were brought in as part of a program about baby animals. 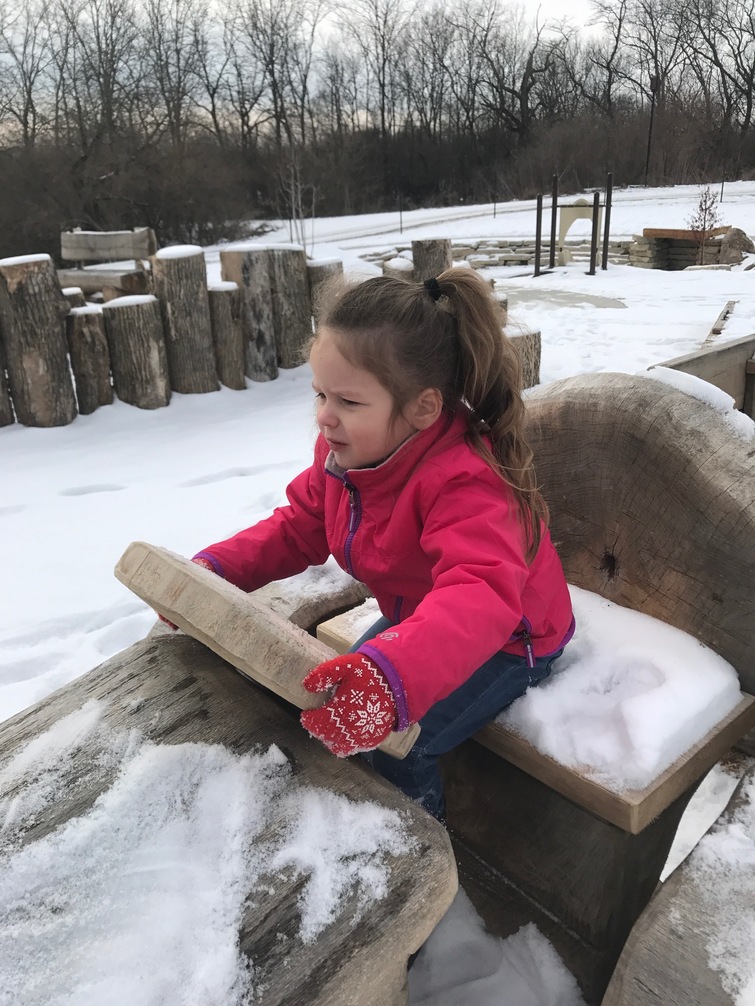 This is part of "Nature Play" area on Chrisholm's grounds...Aster and her new friend didn't let a little snow stop them. 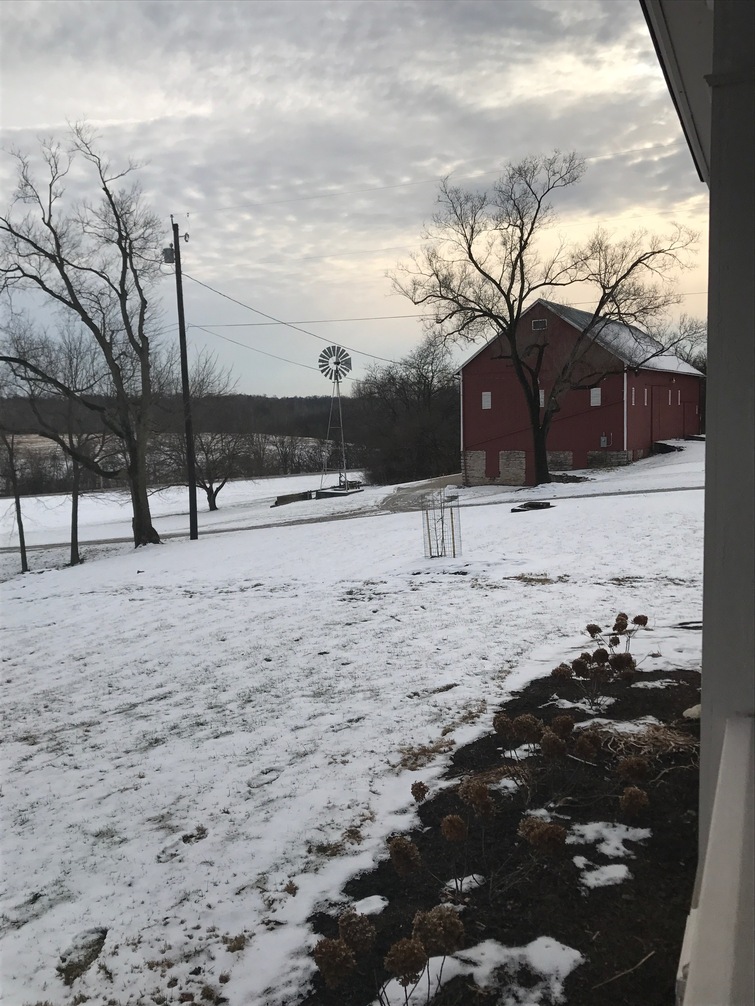