This is a cool, refreshing creamy chocolate creme pie that tastes great on a warm summer day. I mean, this pie would taste great any time of the year. But during the warm summer months, this really hits the spot with its wonderful flavors.

Oh, that’s an old expression… “Hits the spot “… My grandma and my uncles always said that.  I feel like I’m about 90 years old saying "hits the spot." I never hear a young person say “hits the spot. I think there used to be an old Pepsi jingle with those words.

Anyway, we made this pie last week when my daughters wanted to make a pie. This seemed like the perfect one because it was just so easy. No eggs, egg yolks, etc in it to worry about, just cool, refreshing chocolate. You don't need to fire up the oven on a hot day for this. I mean, you do need the stovetop, but that isn't a big deal. In the end you get one of these cool, refreshing pies, no need to go to the grocery and buy a frozen Edwards pie. Geez, have you ever seen the ingredient labels on those? Sorbitan monostearate, polysorbate, dextrose, sodium caseinate, hydrogenated palm kernel oil, soy lecithin, guar gum, and on and on. Nope, not in this Amish Cool Cocoa Creme pie, just basic ingredients that will be the talk of the dessert table!

Pie is just always a staple in Amish kitchens. It seems like there’s always pie around. During the spring and summer, rhubarb pie rules the roost. In the fall apple pie. In the winter it might be oatmeal pie. But then there are also other pies like this one that you were just fine you’re around and Amish kitchen.

I love the homemade pie-in-a-pan crust, that is what we used. Even a 5-year-old can make that crust. You can click here for the recipe and preparation instructions for the pat-a-pan crust.

I took over for the stovetop part, which was just stirring up the cornstarch, milk, cocoa,salt and sugar. I used two percent milk, but you could use skim milk or whole milk. I think the whole milk would give you the creamiest pie.

This part is a bit of a judgment call. I stirred it constantly until it boiled (but what is considered "boiling", a bubble or two, or a roaring boil?) and let it boil for, as the instructions say, a minute. I did it on high, but I think medium heat would work better. The mixture really begins to thicken up and you want that, but you don't want to get it TOO thick and we almost did. But I removed it from the heat in time. Because you still have to add the butter and vanilla extract, so if it is too thick you won't be able to stir that in.

If you are using the pat-a-pan crust, you'll have to bake the crust first for about half hour until it is golden.

Then you spoon the creamy, chocolately mixture into the crust and stick it in the refrigerator to chill. An hour or so later, you have an amazingly delicious pie. It's not too rich, to me, it was just right. But you have to put whipped topping on it. Amazing!

You could sprinkle chocolate chips on top or glaze with a chocolate drizzle. You can make this pie into a chocolate lover's dream. You could also crush some cookies to sprinkle on top and it would become more of a cookies and cream pie. Definitely beats the commercially made frozen pies, I think. And, yes, instead of sticking this in the fridge you could freeze it. I might like that even better. I would love a slice of a frozen chocolate pie on a hot day. For a frozen pie, I wouldn't even bother to thaw just eat it straight out of the freezer. 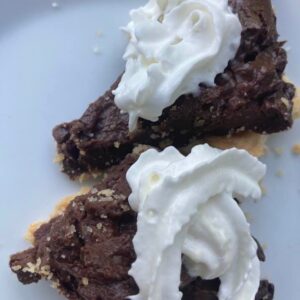 Tried this recipe?Let us know how it was!
« Amish Chili Burgers
Amish Baked Barbecued Burgers »