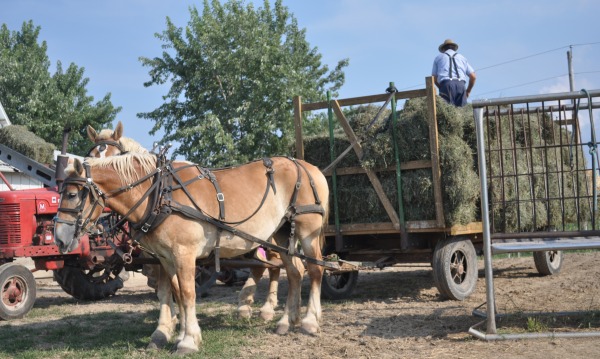 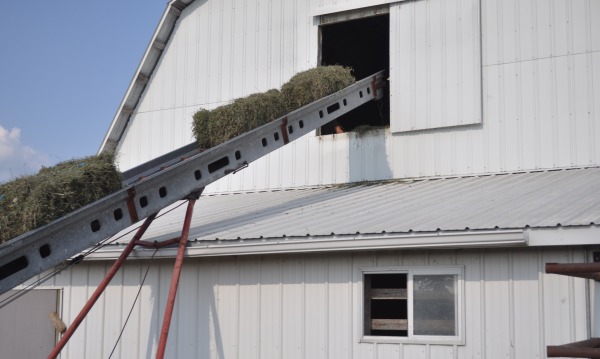 As I explored the grid of rural roads criss-crossing Daviess County, Indiana last week I caught sight of a wagon full of hay bales.  An Amish woman wearing an Amish man's hat also caught my attention.  Those are not scenes you see every day: the Amish woman wearing the man's hat and the wagon loaded with hay.  At first I passed, not wanting to disturb the picturesque tableau, but then I thought to myself "Kevin, this is your job, go back and talk to them!"  So I did so I can bring these scenes and stories to you.  The woman was very friendly.

"Just wearing this hat to keep off the heat a bit," she laughed.  I don't think - understandably - she was expecting company on a weekday evening out in this no man's land. The temperature was nearing a toasty 90 degrees so the hat seemed like a good idea.

The family's name was Knepp.  I actually have a collection of books in my office by Maynard Knepp, a writer in Kansas.  Maynard grew up Amish but now is very active in the Mennonite church.  I asked the woman if she knew of him, but she shook her head.  Knepp is a common last name among the Amish in some communities, but unheard of elsewhere. Daviess County seems to feature a lot of Knepps, Stolls, and Waglers, more than Millers and Yoders, although there are those too.

Daviess County has a storied history in the annals of Old Order Amish history.  Daviess County is where many of the founders of the Aylmer, Ontario settlement originally called home (first making a stop in Pike County, Ohio in the 1950s).  Many of the Amish of Aylmer, Ontario have their roots in Daviess County decades ago.  The Stolls and Waglers would go on to found Pathway Publishing,  the well-known Amish publishing house in Aylmer. Daviess County would also be an important stop for Amish heading south to try their hand at living in Honduras during the 1960s to experiment with starting a settlement there (yes, they drove....perhaps more than anything that fact boggles my mind, driving to Honduras now wouldn't be a picnic, but in the 60s?).    So I found myself searching for signs of a gusty, independent streak here.  Perhaps the woman was showing some of that in her choice of hat. Anyway, back to the present.  I conversed with the woman as she watched her husband toss bales onto a pulley of sorts which then delivered them up to a hay loft for safe storage.

"They are cutting hay the next house over, I don't think they'd mind you stopping by and getting some photos.  Next driveway over,"  the woman said.

Sounded too good to pass up.  So I headed there.  More about that stop tomorrow.