Yesterday I wrote about stumbling upon an Amish family loading hay into a hay mow.  The woman recommended I go visit her husband's parents house next door where they were cutting hay.   So I drove to the next house and couldn't see any immediate evidence of hay cutting going on, but they lived at the end of a long, long driveway, so I decided such an invite was too good to pass up and took a deep breath and headed down the driveway. I wrote the other day about my nervousness/shyness at approaching strangers, there's an added layer of that when it involves cruising down a long driveway. The longer the driveway, the more apprehensive I am. I always feel like I am invading someone's privacy.   But this time I had permission or at least absolution.   At the end of the driveway were a couple of Amish ladies sitting in the shade, enjoying conversation in the late day air when the heat's edge had begun to recede.  I quickly introduced myself and they were friendly and welcoming.   Soon the patriarch of the family, an elderly Amish man with a snow-white beard came out to greet me.  I asked him about the hay cutting.

"Would you mind if I took a photo or two?  If you don't want me to, I am completely fine with that. It'll be at a distance," I offered.

And he was fine with it, said I could take as many photos as I liked.  So he opened a gate and we headed for a long walk to his back field.  I guessed the man to be about 75-years-old, but he still had a spring in his step and a youthful enthusiasm as he explained what I was about to see.  We also chatted about how the area has grown and changed in his 50-plus years living in Daviess County.

"Definitely more crowded than it used to be," he chuckled.

"Crowded with Amish or tourists?" I asked.

Soon we arrived at his back field and saw one of his sons cutting hay.

A team of six beautiful, beefy horses was pulling a contraption (he explained to me what it was, I didn't have my notebook with me...most of the time I don't like to carry a notebook because it seems to disrupt the flow of casual conversation if someone sees me scrawling notes, but this time I wished I had had it) that cut the hay and baled it.  I'm sure one of our more farm-familiar readers will know the name of it.

What struck me most about the scene was how quiet it was. I could have stood there all day and watched.  No noisy tractor belching exhaust or groaning machinery.  Just a warm summer breeze, good conversation, and beautiful barn swallows following the farmer.  The swallows were angling for an easy meal after the hay was cut and mice and little voles were exposed for the taking.

After standing awhile and watching we headed back to the house and then I saw their garden. Wow. More about that tomorrow. But in the meantime feast your eyes on this cantaloupe. 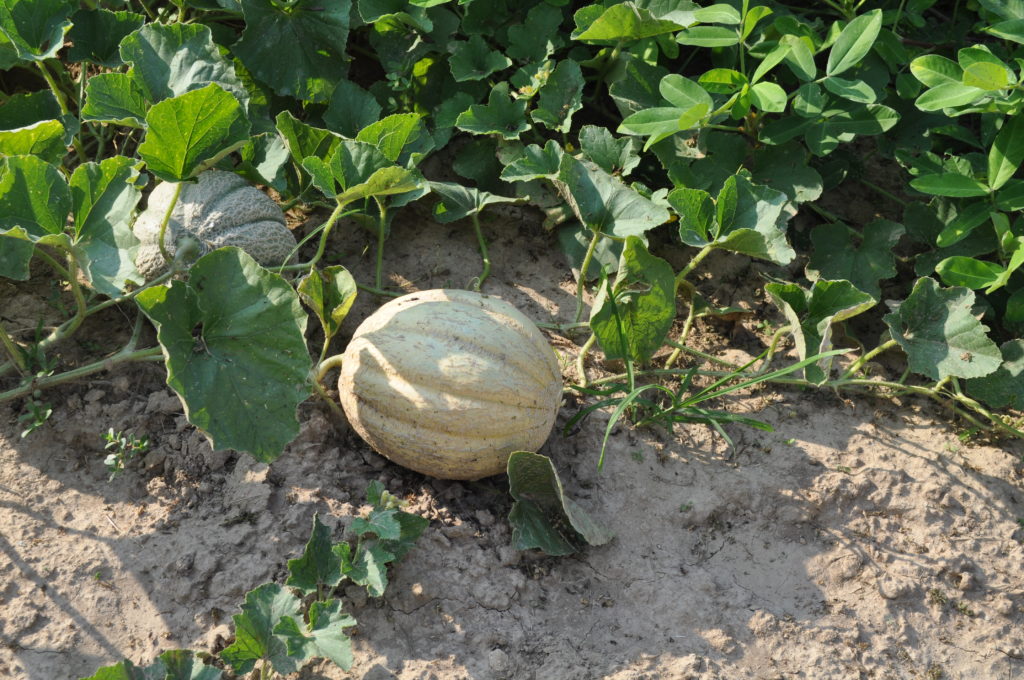 « The Amish Cook: Recipe For "Stuff" and A Look Back
Getting to Know Gloria and Daniel Yoder »