Tiny Delaware has a decent-sized Amish community of approximately 1500 members spread over 10 church districts.  The Delaware Amish community is fairly old having been established in 1915.  Growth has been slow but steady.

An article in the  Global Anabaptist Mennonite Encyclopedia from 1990 had this to say about the community (and,honestly, I doubt a ton has changed in 27 years):

Later migrations to the Dover area (also known as Kent County) came from western Amish communities in Kansas, the Dakotas, and elsewhere. The Dover-Hartley community thus has many Amish who migrated west and then returned to the East Coast. Growth has been slow but steady. Many families moved away seeking "greener pastures" or affiliated with area Beachy Amish Mennonite and conservative Mennonite churches. Amish farms along the Hartley-Dover road are limited in growth opportunities because of industrial expansion. Farmers have grown primarily vegetables and produce for urban markets (truck farming). However, in the 1980s, this community moved into wheat and corn growing. Many heads of households, for economic reason, have established small shops or taken up furniture-making and repair businesses. The Dover settlement was the first Amish community to establish a formal parochial school (private Christian schools). Apple Grove School for grades one through eight was founded in 1925. By 1984 the community had grown to eight congregations with more than 1,300 people.  -- Samuel L. Yoder

“It’s the only capital where you can see buggies in the streets,” chuckled an Amish woman who once lived in the Dover settlement.

And there’s this very stark distinction about the Delaware Amish:

Ten Amish parochial schools are spread out among the ten different districts, so no scholar, as the Amish refer to their students, ever has to walk very far.The church districts are clustered west of the city of Dover out in the countryside, where plenty of Amish home-based businesses from greenhouses to bakeries to bulk food stores dot the rural roads. 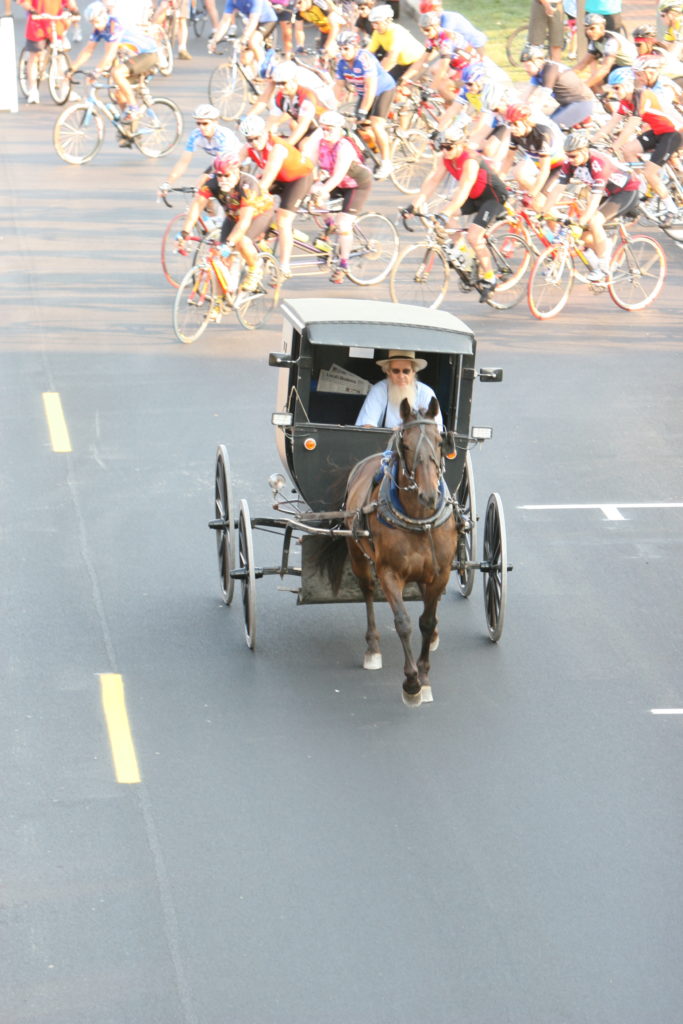 And let the bike tour begin! An Amish man always opens the event with his buggy.

One of the highlights of this low-key community is an annual bike tour that attracts many out of state visitors to what is billed as the “Amish Country Bike Tour.” There are fivedifferent distances that participants can pedal: 15, 25, 50, 62, and 100 miles. This variety attracts anyone from the casual cyclists to the Tour de France wanna-bes. The event is a tour, not a race. Participants just come to bike and enjoy the scenery.The irony is that the Dover Amish communities – like many settlements elsewhere – don’t permit bikes. 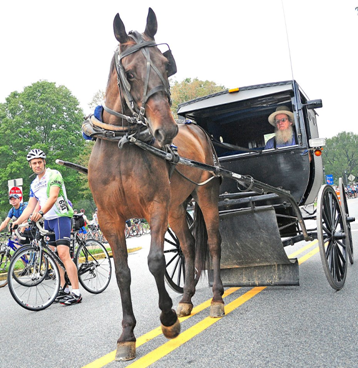 The irony is that the Amish in Delaware don't allow bicycles, but they love the annual bike event! - Dave Chambers photo

As Cindy Small, Dover resident and Executive Director of Kent County & Greater Dover, Delaware Convention and Visitors Bureau describes the terrain, “It’s flat, you could try to roll a quarter and it wouldn’t go anyplace.”

The bike tour’s name is more than just window-dressing; the Amish really do involve themselves in the festivities.

“The very first scene our cyclists see is an Amish a gentleman by the name of Ben Miller who brings his horse and buggy into town and leads the cyclists through the historic town of Dover all the way to city line, and he then pulls away and the cyclists are off. You look and it is a huge number of cyclists coming down the road with an Amish buggy in front of them.” Small notes. Some years up to 1,800 cyclists participate.

The first stop on the tour is at one of the Amish schoolhouses which is billed as a “pie stop.” Byler’s Bakery (not directly related to Dorothy Byler) bakes up to 200 blueberry, cherry, pumpkin, and apple pies for the cyclists. The rest of the routes then meander through the flat, picturesque Amish country.

Some Amish children excitedly anticipate the passing cyclists and they’ll sit on split-rail fences in their straw hats and suspenders waving to participants.And at the end of the tour: Amish ice cream.
“An Amish man makes homemade ice cream and comes to the headquarters, so when people get finished with the ride he is there with homemade ice cream for sale. A John Deere machine makes the ice-cream—never seen anything like it. He tows it into town behind the horse and buggy, gets the motor running, and somehow this contraption makes homemade ice cream,” Small says.

Another distinction of the Delaware Amish community is their proximity to the sea, that means a lot of Amish anglers coming back with fresh fish that finds its way onto supper tables.  And if they don't catch it, they buy it, fresh shrimp is a favorite!