We were at my mother-in-law's last night (Sunday, November 17) and my brother-in-law was flipping through the channels when  he came across the movie "Expecting Amish" on Lifetime.  Knowing my interest in all things Amish he asked me if I wanted to keep the channel tuned to that.  But since by then the movie was almost over and I had heard nothing but cheesy reviews I told him "thanks, but no thanks."   Fortunately, however, Joyce Dingman was watching and she provided us with a review.  Joyce has a lot of experience with the Plain people and you'll learn more about her in the coming weeks when I profile her business Friends Patterns.  But she submitted her thoughts for me to share which are in italics, my thoughts continue after hers: 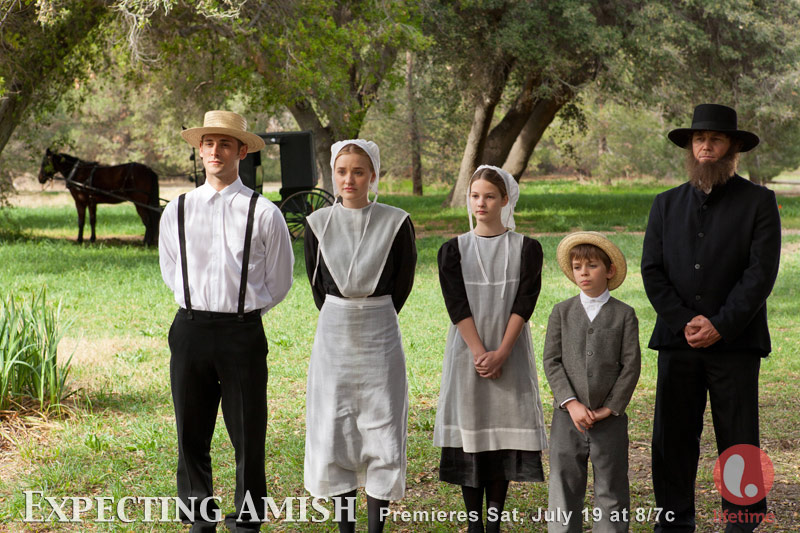 I missed this when it was on originally, but caught it by accident tonight.  Missed the first 20 minutes, but saw the rest.  What can I say?  AWFUL!  There was no research done at all from what I can see.Supposed to be Pennsylvania Amish but...  One of the girls had "bangs" instead of hair parted in the middle and back.  No rolled back hair on the sides.  The Amish fiance of the girl had a haircut that made him look like an army recruit.  As I recall the buggies were black.  They had young girls wearing coverings.They were going to have a baptism at the river and the boy had on white pants and a white tunic shirt below the knees.  Supposedly they were going to be baptized one day and married the next.They not only had a church, but the pews had crosses in the sides and there was a pulpit with a big cross carved in it.The minister took it upon himself to announce the shunning of a boy that stayed in California.The father, 2 minutes after hearing his daughter is pregnant proclaims that she is shunned and can NEVER come back.Plus the production had the absolute worst fake beards!The whole thing just had no research done of any measurable kind.

This sounds awful!  I don't expect Hollywood to be 100 percent accurate, they almost always have to add some salt and pepper to everything or people would not watch.  But, sheesh, some basic rudimentary research would go along way.  A church?? You've got to be kidding me.  And 2 minutes of research on Lancaster Amish would have turned up gray buggies.  And the clothing styles just look very....poorly researched.  I know these are low-budget movies, but, again, 10 minutes on the internet could have yielded them some better results. At this point I don't even care about the acting, everything else is so off-base I would hold my nose and watch it (Full disclosure:  Okay, I plead guilty...I do occasionally watch Lifetime movies, usually when Rachel is flipping through the channels when we are at my mother-in-laws....Last weekend I watched a lot of "A Cookie Cutter Christmas."  Okay, I kind of enjoyed it.  Ouch.  Was just great to see Alan Thicke back in his element...so, yes, it is possible I could "enjoy" Expecting Amish but only in the sense that a person enjoys a Snickers bar...it isn't Godiva, but it's still sweet and my standards are low in that department, but watching Expecting Amish as an Amish authority, I'd give the movie much lower marks)