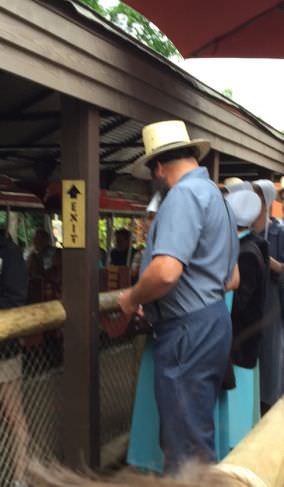 Amish visitors waiting to board the train at the Cincinnati Zoo

It's August and that means the world is on vacation now.  At least that is what it feels like based on all the "Out of Office Auto-Replies" I am getting every time I email someone the past week or so.  And included on the list of vacationers?   The Amish.

As a general rule, traveling is absolutely not discouraged among the Amish.  Seeing the world, which is God's creation, is viewed as a good, wholesome activity.  Families will hire a non-Amish driver to take them (and, man,does that jack up the expense of the trip).  This factor is why often families will travel as a group and actually charter a bus and driver, five families splitting up that cost is often less than one family just hiring a van driver.

So, where DO the Amish generally go on vacation?  Well, same place most of the rest of us go...maybe...Well, it depends.  You won't find many Amish in Atlantic City or Vegas, gambling is generally a no-no.  You will see Amish people at the beach, but I've found that their vacations are more "travelling" vacations, seeing sights more than lounging at the beach.  Destinations with an evangelical or religious bent do fare well,but so do natural wonders.  So here is my list based solely on my experience over the years in order I hear it come up the most:

THE SMOKIES:  Most Amish live in pretty flat areas so the allure of the Smokies, which are some of the closest tall mountains to those flat areas, is pretty strong.  Then you plop Pigeon Forge at the base of those mountains and the allure is even stronger.   You'll see Amish visitors in the pancakes houses and comedy clubs and, like many visitors Amish or non-Amish, some Amish will claim to have "been to the Smokie" even though they never once stepped foot in the mountains, they just visit Pigeon Forge or Gatlinburg which is at their base.

THE CREATION MUSEUM:  This Biblical attraction in Williamstown, Kentucky has gained a very wide following among the Amish.

NIAGARA FALLS:  I do love Niagara Falls, my problem with them is that once you stand there and look at them for 10 minutes, 30 minutes, whatever, then what do you do?  Don't get me wrong,the falls are awe-inspiring,but what else do you there? If someone has any suggestions, let me know.  This "what do you do factor" doesn't deter Amish visitors who flock from all over to see the falls.

ZOOS:  Zoos have long been favorite destinations for Amish travelers....Cincinnati Zoo, St. Louis and Columbus, Ohio are popular ones.

THE GRAND CANYON:  It's far, far away but the allure of the canyon is not lost on the Amish who flock from all over to see it.