I hope everyone had a great Fourth of July.  Mine was spent doing what probably any parent of little children does: going to picnics, fireworks, parades, and visiting every port-o-potty we encountered.  I'd be lying if I'd say I wasn't tired, but it was all fun and I'd do it all over again so I am not complaining in any of this.  But I guess the first thing I'll say is: Holy Cow.  The Fourth of July crowds were just, well, crowded.  We went to three events:  The "Red, Rhythm, and Boom" event in Mason, Ohio on July 3,  the Fourth of July parade in my hometown and the "Red, White, and Blue Ash" event in Blue Ash, Ohio on July 4.  I know we have readers from all over the world who come to Amish365 so I'll try to make these posts interesting even if you have never heard of "Blue Ash" or "Mason", you know, it really doesn't matter, what I am saying can probably apply just as easily in Scottsbluff, Nebraska or Alice Springs, Australia. 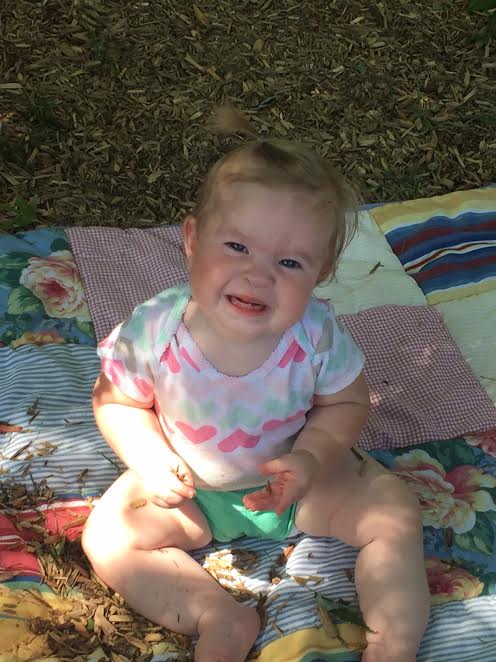 Bea, who turned 10 months on July 3, tried out her first tiny "pigtail" which if you look hard enough you can see.

OBSERVATIONS FROM MASON:  Basically I went to Mason so I could wait in line.  Okay, sarcasm aside, that is what it felt like. It was a wonderful event, but....Holy Moly, talk about being a victim of its own success.   There was a concert there from American Idol 2012 winner, Phillip Phillips.   We went to the event with my MIL and quickly realized that if we didn't all split up, we'd be waiting in line all night.  So I went with Aster and Bea to the kids section to play some games.  MIL got in line to get some fries and my wife,Rachel, got in line to get some pizza.  Even with splitting up, we were still in line all night.  I will say the "Kids Zone" at this festival gets a huge thumbs up from me (see the Blue Ash section) because by purchasing a $5 wrist band kids got unlimited rides, games, etc.  Now THAT is a decent deal. 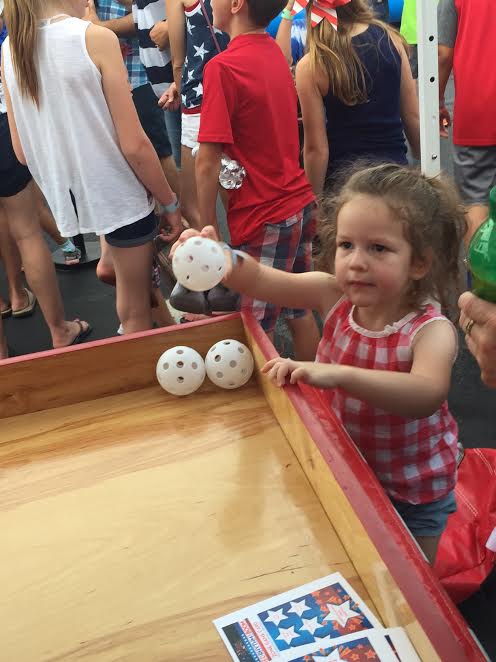 Aster tries a game at the festival in Mason 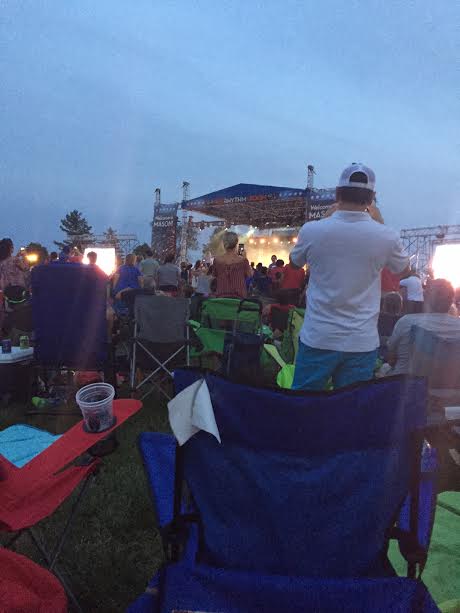 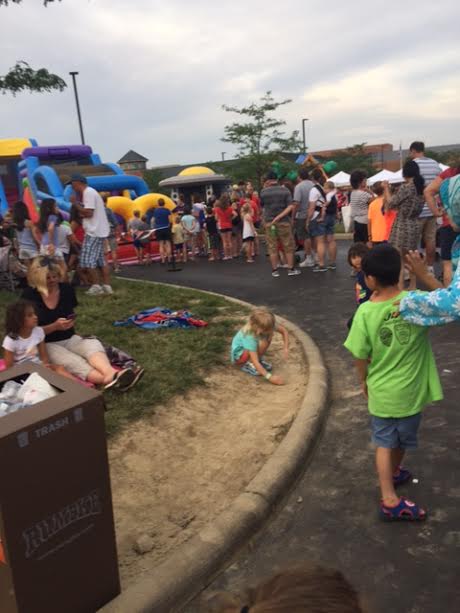 The hour-long line for the obstacle course....

MIL waited in line for an hour only for them to run out of fries just as she was about to get the ordering counter.  So she then swapped places with Rachel who was still waiting in the pizza line 75 minutes later, so Rachel could go back and catch at least some of the concert.  As MIL approached the pizza counter that booth too was rapidly running out of product.  She managed to snag four slices of pizza, one a piece for me, Rachel, MIL, and Aster and that was it.    But, okay, that's fine.  There were still fireworks....but, inexplicably...they were launched in a place quite a distance from the concert site and in a spot that was almost completely obscured by trees  (Aster:  "Who put those trees there?") I realize not every spot at every fireworks venue is going to have a clear view, but you'd think that the fireworks would have been in an easy-to-see spot for the throngs of concert-goers. 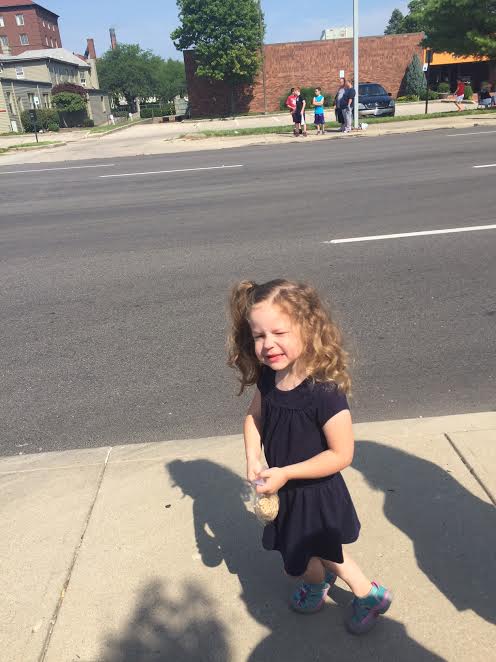 At the Fourth of July parade in Middletown, Ohio, not huge crowds where we were. 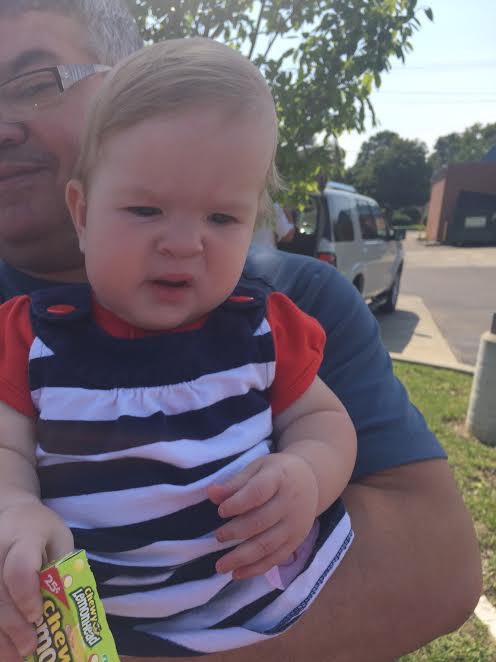 Bea and I catch some candy at the parade. 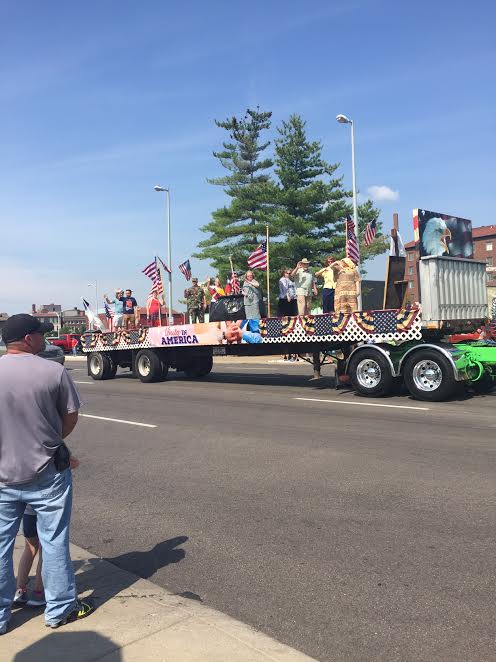 Floats, tossing candy, and politics were part of the pageantry at the Middletown parade.

OBSERVATIONS FROM BLUE ASH:  You know, I don't really have anything negative to say about this event.  But it was CROWDED.  Local news reports put the crowd size at over 100,000, which is a lot of people for a village of 12,000 people (and a lot of industrial parks and tech campuses).   All things considered, though, even with crowd size being probably double what it was in Mason my experience was that it ran more smoothly.  Food lines were still long, but for all those people you could get some stuff fast...I managed to snag a funnel cake and fried pickles with only a short wait.  My brother, on a sweltering day, was able to walk up and get a Graeter's ice cream with no wait at all.  Ditto for some of the drink booths.  Just the sheer number of food vendors in Blue Ash assured that waits were - generally - manageable.  Man, though, no way was I going to stand in the gyro line which snaked through the grounds and probably would have taken an hour.   Not for a gyro.

The musical attraction in Blue Ash was REO Speedwagon of which I am a HUGE fan of.  Still, I'm a bigger fan of my daughter and ended up missing most of the concert (SIGH) because I took her to the kids section where she managed to find another inflatable obstacle course type thing.  Unlike in Mason, Aster wanted me to do it with her and, ugh, all I can say is I don't bend and contort like I used to.  The course was not designed for 45-year-old men.  The Kids Zone here was definitely overpriced compared to Mason. Two romps through that obstacle course cost $9, all of the rides and kids games were priced similarly.  I'll take the $5 unlimited wrist band over that anyday.

I lucked out and happened to catch my favorite REO Speedwagon song, so that was good and the fireworks were spectacular and for a crowd of 100,000 people, traffic was remarkable smooth getting out.  So, kudos to Blue Ash and I hope everyone had an awesome fourth!