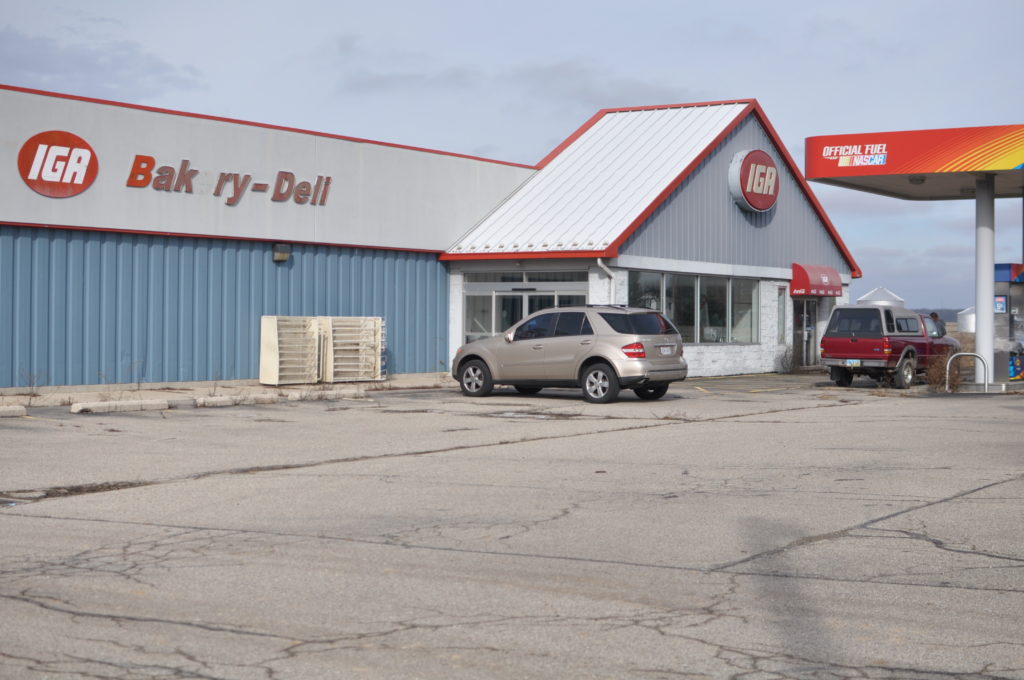 This looks like it was once a cool place: a combination full-service IGA store with gas pumps right outside. Awesome. I was fooled by these cars parked outside the store, but turns out they were just contractors or something doing work (so maybe the store will get a second life?) Anyway, at least for now, this grocery is an empty shell.  An awesome near by Mennonite grocery store/deli (which I'll talk more about next week) has helped fill some of the grocery void in Frankfort.

I have a soft spot for IGA grocery stores: the scrappy independent supermarkets that still hold sway in small-towns.   You know, the kind with actual helpful workers and butchers that cut the meat themselves. IGA is in 46 of the 50 states (sheesh, which states DON'T have them?) and apparently over 30 countries. So does this mean if you are in Australia, Russia, or Brazil that you can see the comforting, familiar, IGA logo on a store?  Wow, that is interesting.  You can read more about IGA on their website if you are really bored.

Our town used to have at least three IGA's, but they are long gone and the local grocery landscape is lesser for it.  I hope IGA is faring better in other countries, because it sure doesn't seem to be doing well here.  I guess IGA is also in Canada.  Now I have been to Canada quite a bit and I've never seen an IGA.  If you live in Canada and know where one is: let me know.  In the United States it seems like there has to be a "sweet spot" for an IGA to thrive and that sweet spot is being in a town that is too small to draw in a Wal-Mart or a Kroger, but still large enough to support a full-service grocery.  Towns in the population 1500 - 5000 range.

For some reason I always get excited (okay, that may be too strong of a word) when I see an IGA while traveling the rural roads.    25 years ago my part of Ohio probably had 20 IGA grocery stores, not just in rural areas, but tucked away in bustling neighborhoods of Cincinnati.  Now when I go to their store locator, there are probably 3.  (there is a format called IGA Express, which is a convenience store and that doesn't count in my book)

So, anyway, I was saddened to see the IGA pictured above shuttered and out of business in Frankfort, Ohio.  If such a small town can't support an IGA, you wonder where they can survive. A local Mennonite bulk food store has "really stepped up" since they closed, a local resident told me.  Otherwise, people have to drive 13 miles away to larger Chillicothe for groceries.

So, is IGA still holding court where you live? Or are they dying out in your part of the country also?