I don't eat at Subway very often.  I don't particularly enjoy eating yoga mats, and their sandwiches just don't do a whole lot for me.  If I am going to eat a sub sandwich, I far prefer Jimmy John's.  But I have always had a soft spot for pizza and fast food chains have repeatedly - with mixed results -  tried to get into the pizza business over the years.

I actually liked the McPizza that McDonald's tried serving up in the late 1980s.  But it didn't catch on with customers and McDonald's abandoned it.  I do remember McPizza hanging on well into the 1990s at a truck stop McDonalds off US 42 and I-70 near Plain City, Ohio.

Subway actually had a decent pizza on its menu at some locations over the past few years.  I remember my sister-in-law turning up her nose at my ordering of a Subway pizza only to be looking longingly at it by the end of lunch and eventually ordering one herself.

But now that decent pizza has been replaced with Flatizza, which I ordered yesterday for lunch. $3 for a Flatizza seemed harmless.  Although the lady behind the counter talked me into two for $5. 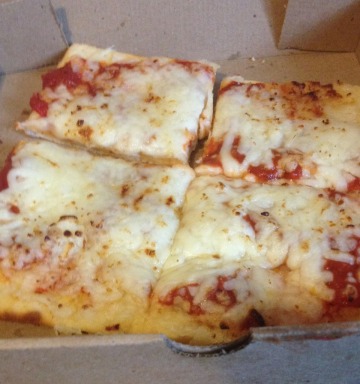 First of all, there is the name.  It's absurd and I found myself getting mildly annoyed  at having to try to butcher through that odd name while ordering.  Of course a pizza is going to be flat.  This would be like naming a burger the Roundurger or fried chicken the Crispyhicken.  It just seems silly.  If the best, most prominent thing you can think to trumpet about your pizza is that it is flat, I guess I should have known there was trouble ahead. (As an aside, for a long time our hometown hospital had billboards up and down I-75 advertising "Free Wifi" throughout the hospital.....c'mon, how about "great cardiac unit!" or "come here to conquer cancer!"...if the best thing the hospital can think to advertise about itself is free wi-fi, then like the Flatizza, there's trouble)   How about Thinizza, because, for starters, the pizza is terribly thin.  You could probably hold the crust up to sunlight and read a newspaper through it.  Not exactly a filling meal.   And maybe I have been spoiled by too many of Rachel's thick, flavorful homemade pizza crusts, but this tasted bland and dull, like I was munching on the newspaper I'd try to read through the crust.   Subway attempts to compensate for the flavor-free crust by smothering it in a supersweet tomato sauce and then burying that in cheese. I got the cheese and the veggie version, but they have meat versions too.  They probably try to bury them in meats to compensate for the cardboard crust.

So,there's not much else to say....by the time I got to the last square of the pizza the crust had gotten quite soggy and the cheese was dripping over the edge like grout that hadn't been properly applied.  In the veggie version, the veggies were so smothered in cheese that I couldn't tell whether I was eating a pepper, an onion, or a stray meatball from the sub that was being prepared in front of me.

So, my verdict: if you want pizza, skip the Flatizza.