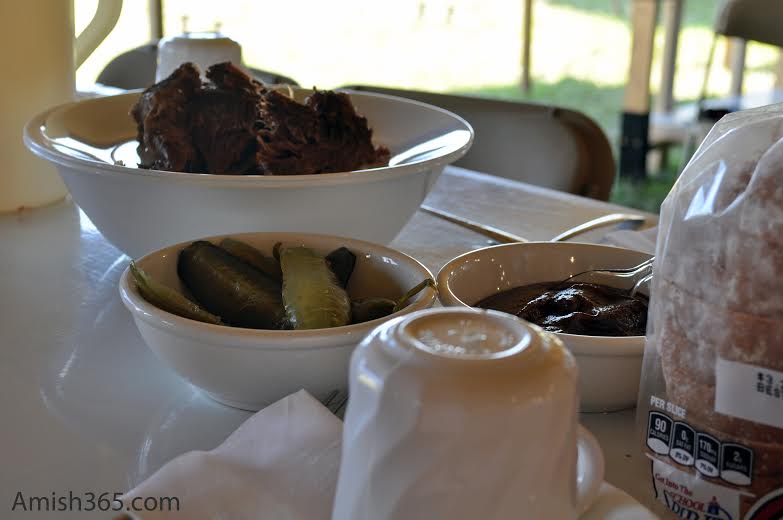 Captions:  Scenes from the supper table. Most of the photos are pretty self-explanatory if you read the piece below, but of special note are the two tubs of shredded bread.  The German Baptist Brethren in these church districts near Lima use a mix of wheat and white bread in their bread soup.   German Baptists in some other settlements might use a thicker bread like a French bread, but most use regular white.

Also of note is the photo showing the inside of the makeshift kitchen, with plenty of coolers and kettles and in this shot a lone cook cleaning up after a busy day of serving meals. The kitchen will be dismantled immediately after the conference ends.

How do you feed a small city?  Simply and efficiently it turns out. Over 3000 Brethren descended upon a rural farm outside of Lima Ohio for the Old German Baptist Brethren Annual Meeting.  That is a lot of mouths to feed.

The German Baptist annual meeting offers two meals a day to the Brethren and the public throughout the event's four-day run.    True to tradition the men and women sit separately to eat, although there are some mixed gender tables.  When we ate there (Saturday, 4 p.m.) it was a bit more informal with Brethren families sitting 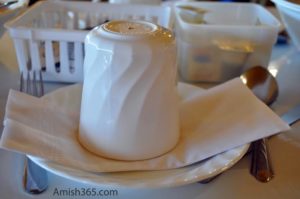 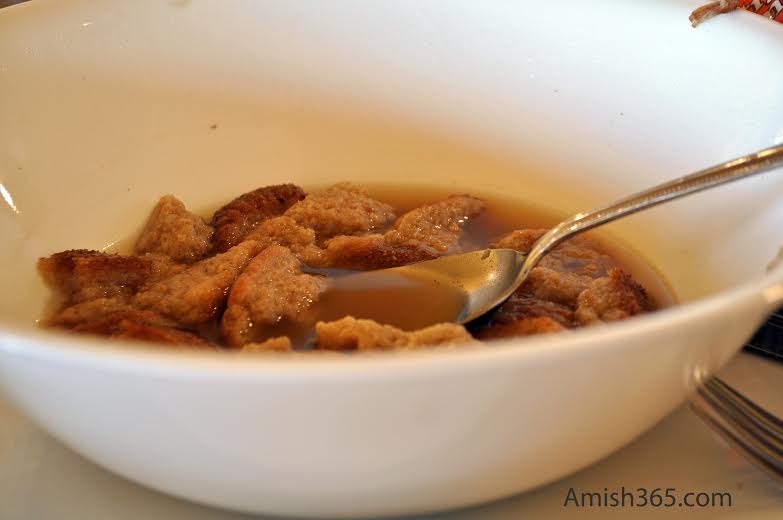 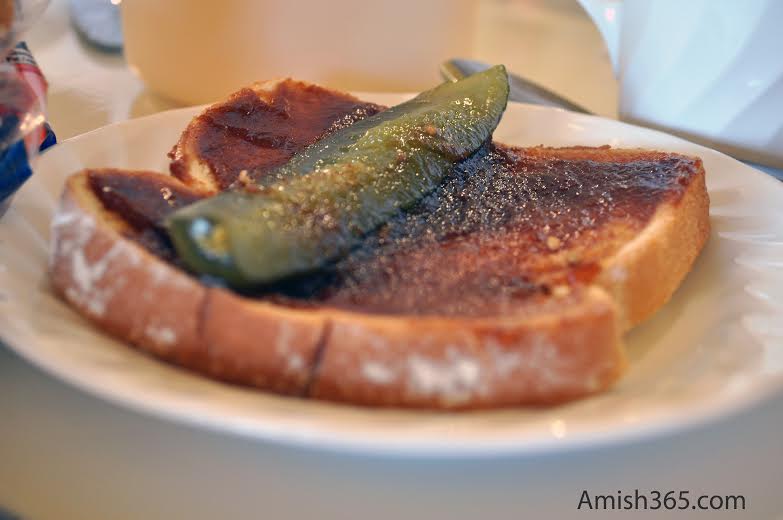 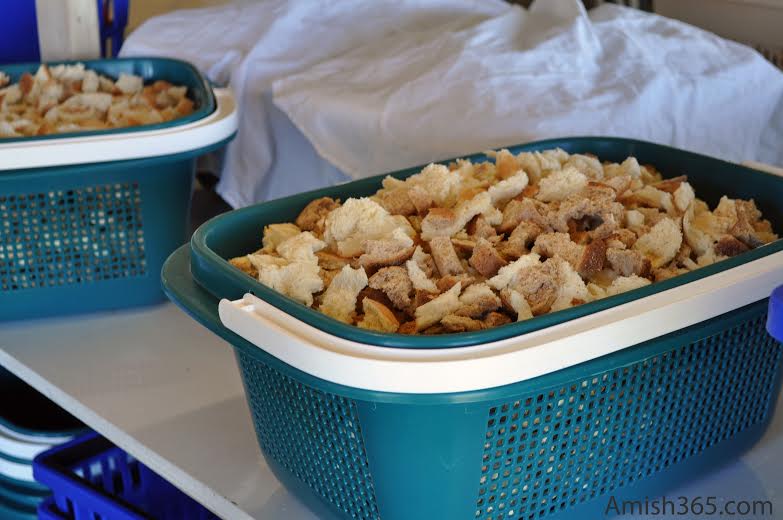 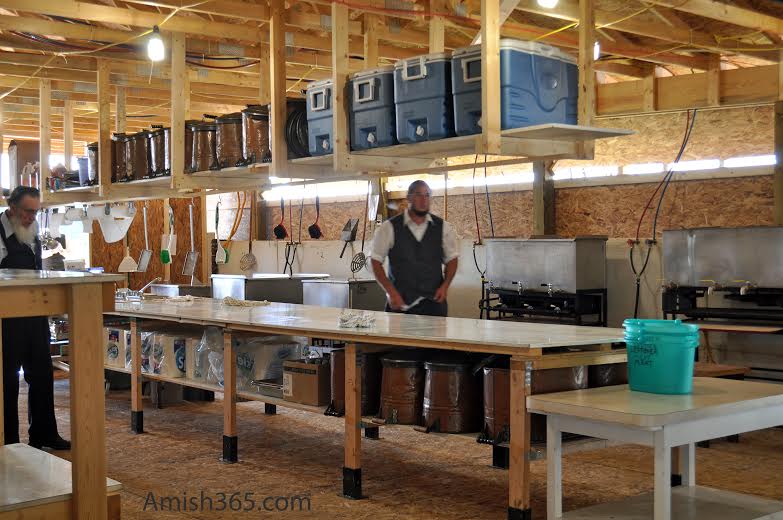 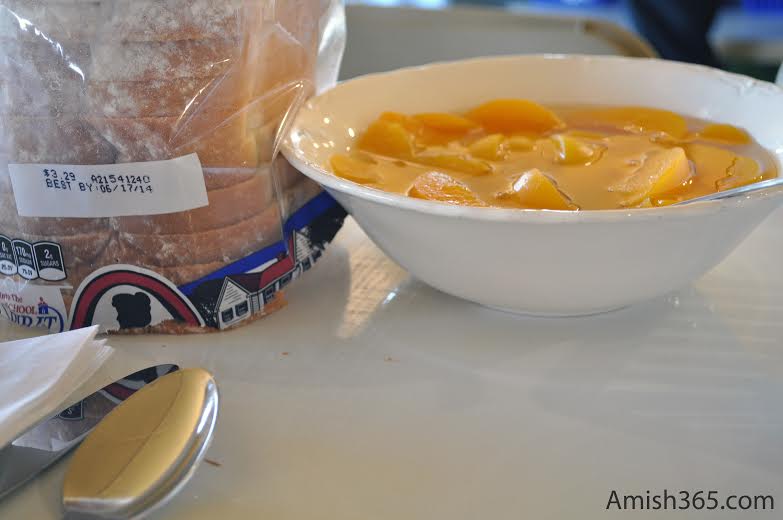 Bread is central to the meal and for that they call upon Aunt Millie's, a regional favorite based in Fort Wayne to deliver 1800 loaves of it for the event.  A bread truck sits outside the makeshift kitchen. There is also a hunk of beef at each place setting, some sweet pickles, apple butter, and peaches.  4,000 pounds of beef are fed to attendees and they go through  32 5-gallon containers of pickles. A pitcher of water is also on the table to drink and hot coffee is passed around.  Many of the people put their beef on a sandwich with apple butter and pickle.  I wasn't sure I could have stomached a beef, apple butter, and pickle sandwich so I just opted for the apple butter and pickle.  To my surprise, it was pretty good.  I think it was because it was a sweet pickle, a dill pickle on an apple butter sandwich? No thanks.  As an aside (this is not a judgmental comment either way, just an observation) even though this is a larger crowd than even the Amish usually handle,  the Amish likely would incorporate more homemade food into the event.  You don't see tables of homemade pies at annual meeting or a gazillion casseroles.  The meal is simple and modest (yet it does exude a certain traditional charm). Unlike an Amish gathering which might feature a dessert-heavy menu of pies, cookies, and cakes, the peaches are the dessert. The menu does not change for any of the eight meals at annual meeting.

Perhaps the central feature of the meal is "bread soup."   It's a bowl of crumbled bread which has been soaking in hot beef broth.  The dish might not sound very appealing but the bread simply becomes a sponge for the tasty broth, so it really does work.

The young folks gathering actually has a bit more diverse menu and I'll post about that in the coming days.

Rosanna, our Plain Kansas columnist, met us for a meal and took us on a tour of the kitchen.  Every things is well organized with squads of volunteer workers ready to swoop in and clear tables, refill water pitchers and food dishes.  The tables are quickly cleaned up and food put back into a refrigeration truck that sits outside the makeshift kitchen.

But Rosanna wasn't the only one we saw who we knew.  In a gathering of a 1000 people, who happens to sit across from us?  Our midwife, Leah, and her family attended the gathering.  Leah was the first person Aster saw as she entered this world.  Leah's just a very special person to us because of that so it was wonderful to see her again.