CAPTION:  Old Conference youth play volleyball this past June in a field outside Lima.

In 2009 the Old German Baptist Brethren endured a major split with about ⅓ of the church body ultimately splitting off and forming the New Conference.  The divisions were over multiple factors, one of them being the adoption of email and the internet in daily life. The New Conference church embraces the internet, whereas the Old Conference still does not allow for it. There were other doctrinal divisions and disputes over Bible study outside of the Sunday worship setting that also contributed to the division.  Both the Old and New Conference remain "Plain" churches, adhering to plain dress and modesty, although I think you see more bold colors and patterns on the dresses of New Conference women.  Both Old and 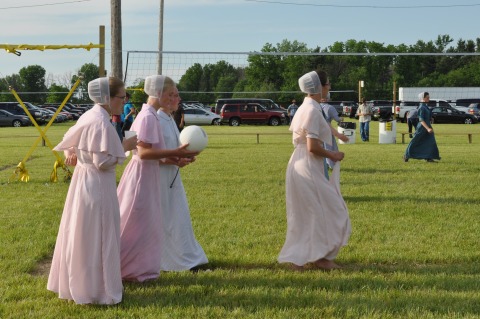 New groups have continued the tradition of an annual meeting and I attended and wrote about the Old Conference annual meeting earlier this year.  While the Old Conference meetings tend to be held on a farm someplace, New Conference conferences are held in auditorium-type settings.  This year's conference was held at Cedarville College in Ohio.  Last year's meeting was at George Fox University in Newberg, Oregon. Conference locations rotate so they can be close to existing congregations.  I was doing some research this morning and discovered a SUPER collection of photos from the 2013 conference by photographer Luanne Cadd.   This really is an amazing collection of photos that respectfully chronicles the conference and church.  It know it's from 2013, but these were too good not to share! Click here to enjoy Luanne's selection of photographs.  It's fun to see the photos of the young peoples' gatherings and of the elderly German Baptists gamely learning how to use smartphones!

« Amish365 Plus: Amish and Photos and Guess What Is Different?
German Baptist Lodging? »