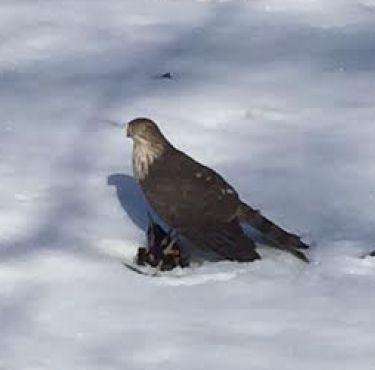 A Cooper's Hawk pins a starling in the snow....

My wife loves feeding the birds, especially on frigid, snowy winter days.  She puts out a whole bird buffet of sunflower, peanuts, thistle, basically, the works. If you are feathered and in our hometown, Rachel's feeder station is where you want to stop.  Well, unless, in turns out, you are a starling.

As I was leaving my house the other day there was a swift blur out of the corner of my eye as a hawk came charging out of the eastern sky, arced under our towering maple, snatched a starling seemingly out of mid-air and then landed by our driveway to enjoy his meal.  Meanwhile, the starling, not wanting to be lunch, squealed and squealed in understandable protest.  That tiny starling sounded like a bobcat in distress.  I watched the scene unfold.  It was a little bit of a dilemma.   Do I  intervene on behalf of the starling, but then deprive the hawk of needed food?  Or do I side with the hawk and let the starling become lunch?  While contemplating those questions I crept closer to snap some photos, which the hawk obligingly let me take.  Meanwhile, the neighbor's cat absolved me of settling those moral questions.  The orange tabby came bounding across the street seemingly out of nowhere making a beeline for the much larger, talon-equipped hawk. This might get ugly.  But at the last second the hawk relented and flew away, leaving it's quarry flapping in the snow with the cat still charging.  Outdoor house-cats kill one billion birds a year in the USA (a fact that places me firmly in the "keep your cat indoors camp"), so I wasn't going to side with the house-cat. I would have rescued the starling.  But the stunned starling saw its shot at freedom and quickly regrouped and flapped away.  I followed the starling to see if it needed some aid, but it disappeared into the neighbor's back yard, melting away into the brush.  So, no one won, except maybe the starling and maybe me for getting this awesome picture.