This is off topic but I found myself disagreeing with this guy's rant about shopping carts.   I don't know who this guy is, I just saw a post linking to it on my cousin's Facebook page so I drank the Kool-Aid and read it. 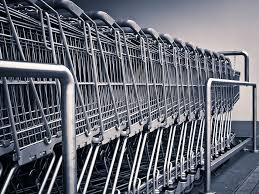 Okay, I agree with his premise:  people should return shopping carts to the coral or to their proper berth in the supermarket.   On that, we can probably all agree.  Where I disagree is that you can extrapolate a person's entire personality on whether they put a shopping cart away.  At least in a single instance.  95 percent of the time I put the shopping cart either in the coral or back in the store.  Perhaps even 98 percent.  Now, one thing I never do is leave a cart in a parking spot.  That is selfish.  But on an occasion or two, I have pulled the cart up onto the grassy berm by a spot or left it on the curb in front of the grocery store.  The conclusion you can draw from that dastardly action according to the writer:  you're selfish.

Holy cow.  See, that is where I don't get along with people very well who look at everything black and white  (if you are one of those people, sorry, I love you anyway and thanks for stopping by).  The problem is there are choices in the middle:   Yes, if you never return a shopping cart, you're a selfish lout.  According to the writer, if you always  return a shopping cart, you're a happy saint (which actually isn't true because the writer is driven so bonkers by out of place carts, he doesn't sound very happy to me).   But what about the people who aren't at either polarity?   I think you have to look at the totality of someone's actions.

I confess last week when we were traveling and I had Bea with me I was at a grocery store in a crowded, crowded sweltering parking lot. I had to park a football field away from the store and with no cart corals nearby, yeah, sorry, selfish me didn't feel like lugging Bea and pushing the cart all the way back to the Harris Teeter grocery store.  So I walked about 3 /4 of the way and put the cart on the curb in front of the store, still a good distance from the entrance, but safely out of anyone's way.  And I knew, as crowded as it was, someone would snap up the cart in a hurry (and, sure enough, they did).  So, according to the writer, "it's all about me" because I didn't walk the other fourth of a football field to put the cart in the store.

This guy's pet peeve is shopping carts.  Mine are people who are so black and white that they try to extrapolate a person's whole personality from a single action.  You can't do it.  Maybe someone was having a bad day and they just decided to say "screw you to the world" and in a minor act of rebellion decided to leave their cart in a parking spot (again, I never do that).  But 98 percent of the rest of the time, he/ she puts it in the correct spot?  Does that make him/her a selfish, unhappy person because on that one occasion he/she didn't follow protocol?  I don't think you can draw that conclusion.  What about the elderly person who struggled to push the cart to their car in the first place and they left it up on the berm instead?  And what if that same elderly person thought they were more of a hazard to everyone else tottering back through the parking lot to put the cart back?  Hardly selfish.  I just think people are too quick to judge in general, but let alone on shopping cart behavior.

And the writer says about shopping carts littering a lot:  "That drives me insane."  Really?  I mean, yes, it is annoying when a parking spot is hogged up by a cart, but carts on a grassy berm at Kroger drives this guy insane?  We live in a land of prosperity and plenty and are blessed to even have a grocery store stocked with more foods than many people in other parts of the world would see in a lifetime and the guy is "driven insane" by a few shopping carts?  Geez.  I just can't relate to that mindset.  Yeah, it's annoying, but there are far, far, far more things - in my opinion - to be driven insane by than shopping carts in a retail parking lot.  That's like getting upset at concession stand litter at a ballgame.  Annoying, but it happens.  Not like these are shopping carts littering a lush park.

Anyway, this post isn't about shopping carts (you should put them away), it's about judging people over a single shopping cart.

I can't believe I just wrote 500 words about shopping carts, but, there that's off my chest.  What do you think?