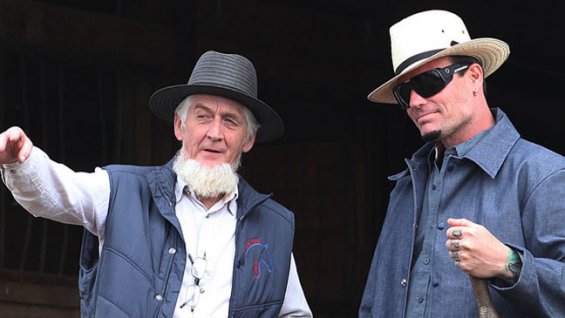 CAPTION:  Scene from Vanilla Ice Goes Amish, actually one of the better recent reality shows about the Amish.

This morning I saw an article in the newspaper of The Michigan Daily, a student newspaper in Ann Arbor, that made a passing reference to the Amish.  A senior wrote an article about "procrastination."  One of the passages from her column was:

Some truly great moments happen while procrastinating. Once, I convinced my roommate to spend six hours watching “Breaking Amish” with me on Netflix. It’s neither one of our proudest accomplishments, but we’ll always remember it as a fun time we spent together in the months leading up to graduation.

If the topic of procrastination interests you, you can read her full essay here.

Breaking Amish is that absurd show (almost as absurd as Amish Mafia)  on the TLC channel that follows Amish young people around as they supposedly decide whether they want to remain Amish or not.   The show is about as genuine as an ice-skating unicorn.

In the 23 years that have passed since I created The Amish Cook column (back then it was the only game in town)  the media has been saturated with numerous shows about the Amish from "Amish in the City"  back in 2001 to Breaking Amish, Amish Mafia, Vanilla Ice Goes Amish, Amish at the Altar and so on and so on, not to mention the tsunami of Amish fiction that has saturated every corner of the literary market .  But a college student like the one who wrote the essay has a 6-hour "Breaking Amish" marathon on Netflix??    Either the student is schooled enough in the Amish (possible but doubtful) to realize the show is a farce or, frighteningly, she'll believe what she watches. Or she'll at least come away thinking that the show at least has some residue of reality.  Nope, it does not. It's a pure fiction confection.   It troubles me that impressionable young people (oh geez, I sound old, old, old when I say that) might watch such programs and confuse them with reality.

Amish culture first captivated me so many years ago because it was different than mainstream American life.  The Amish occupied a quiet corner of society and there was an allure to that.  I still find myself drawn to Plain culture.   I know now that the Amish are people like everyone else.  Some Amish are forgiving, others are not.  Some are nice, others are not.  Some are superb cooks, others I wouldn't get near their kitchen.  But there is an undercurrent of family, faith, simplicity and humility that washes over Amish culture as a whole and I find those traits refreshing in today's crazy world, maybe even more so than I did 20 some years ago. I think there difference today is that I find myself more discerning about which Amish group I find the most alluring.  There are some that are theologically and sociologically very appealing to me, while some other groups I don't find appealing at all.

I just wonder if I were a kid today coming of age if I would look at the Amish through the same lens that I did back when I created The Amish Cook column at age 19.  Probably not.  And that is sad because I think our cultural tapestry loses something without the Amish being portrayed and represented accurately.

Hopefully the reality TV obsession with the Amish will wane, the glut of fiction will fade, and the Amish will return to being a culture living in agrarian isolation that leads by example.  And maybe another 19-year-old kid will sometime find him or herself fascinated with them and start something new:)

« Amish in the News: Pinecraft, Florida - Heading into the Quiet Zone
Our Most Popular Recipe..... »