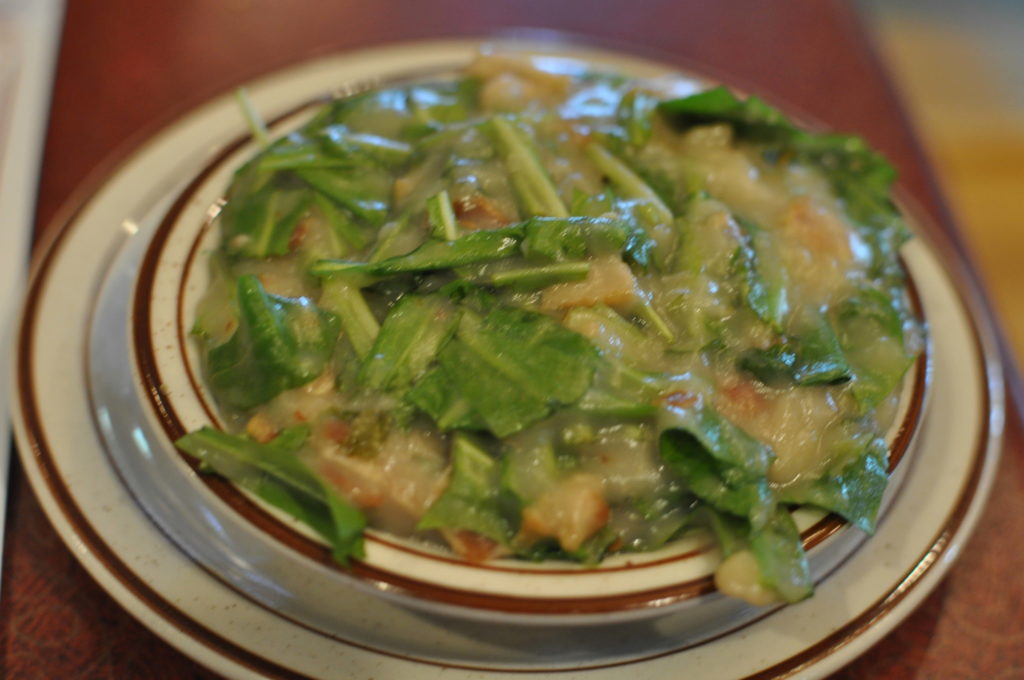 Delicious dandelion gravy, it was very, very “bacony” in its taste, so if you like bacon, this dressing is for you…any bitterness from the dandelions were smothered by bacon.

One of the things I love about Mrs. Yoder’s Kitchen in Mount Hope is that the menu is always changing and that they showcase authentic Amish recipes that you can’t find anywhere else, items like Poor Man’s Steak, Rivvel Soup,and Pickled Eggs are all ones I’ve seen on the menu.  On my most recent visit I saw a spring staple in Amish country:  dandelion gravy. Wow, oh wow, you won’t find that many places. I asked our kind server whether they just went out to a field and picked these dandelions (really, how else would you get them?) and she said she guessed that is how they did it.  Although she did add that some people are beginning to grow them commercially (hmmm, my yard could be worth a fortune then)

Here is how Der Dutchman restaurant in Walnut Creek makes their gravy according to Der Dutchman’s blog:

Dandelion gravy is a truly unique recipe in Amish country and there are several ways to prepare it. In some recipes, it’s really more about the gravy and less about the dandelions.

In Walnut Creek, Ohio, dandelion gravy is served as an occasional lunch special and only made in spring when the dandelion greens are the most tender. Courtesy of Verna Yoder and Mary Raber, longtime cooks at Der Dutchman, here’s a general recipe for preparing the gravy:

1. Make a gravy by browning butter then adding flour and milk. Stir until smooth.
2. To this mixture, add chopped hardboiled eggs, chopped bacon, salt and vinegar to taste. If you prefer, you may leave out the vinegar.
3. Last, add fresh clean dandelion greens and stir until just wilted.
4. Serve over boiled potatoes (mashed slightly with a fork) or mashed potatoes.