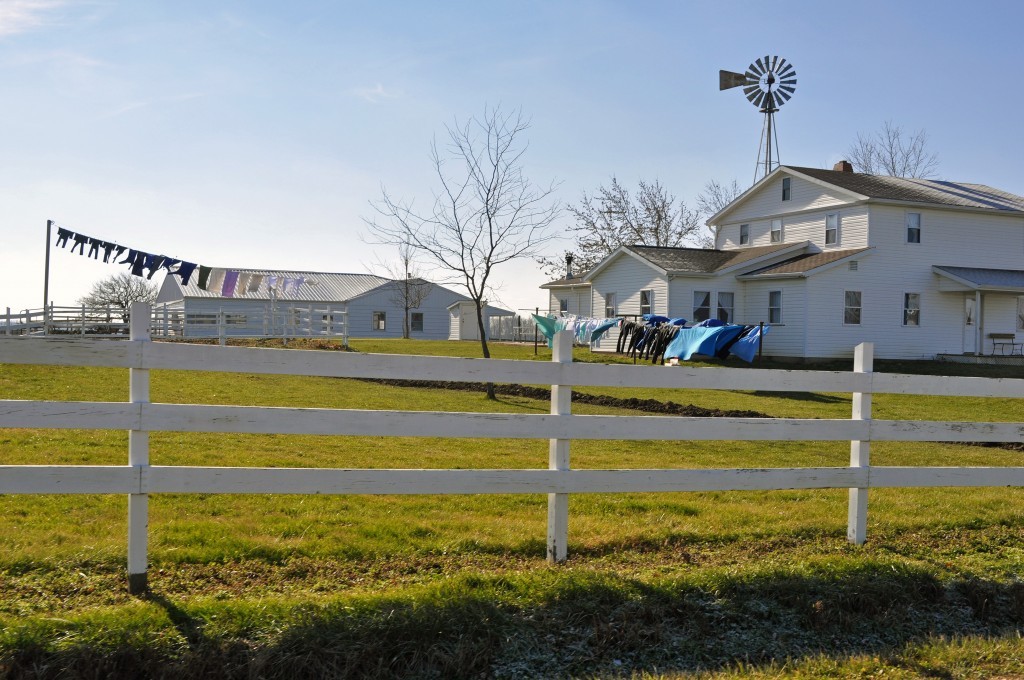 A farmhouse outside of Berne, Indiana

I am working on an Amish-oriented story for the online magazine Atlas Obscura.  I look forward to sharing that will all of you soon.

As a journalist, though, I'm often limited by space and word count, but sometimes you get some morsels that are just too fun not to share but there just isn't space to work them into the story.  During the course of this story I connected with Greg Humpa, a linguist and now an administrator for a non-profit in San Francisco.  He spent a lot of time in the early 90s studying the unusual Amish dialects found around Berne, Indiana.   He was actually there around the same time I first started venturing into the Berne settlement, he was studying language, while I was studying the culinary culture.  I get a little wistful hearing about his life trajectory because he sort of moved on from the Amish. I didn't.  25 years later, here I still am. While I have found my studies of the Amish over the years extremely fulfilling, I'd be lying if I said I didn't sometimes wonder what my life would be like today had I just moved on and spread my journalistic wings. When you get to be my age you just become increasingly aware of how fast time goes and that life gives you few "do overs."

Anyway, back to the morsels "too fun not too share" from Greg:

I'd been invited to have dinner with an Amish family (mother, father, and most of their 13 children).  The mother and some of her daughters were busy at work in the kitchen, but I couldn't see what they were preparing.  I could smell eggs and ham cooking.  When we sat down to eat and the meal was brought to the table, the mother said to me, "We're having Amish Egg McMuffins!"
I love it!  Interesting, not long after he had those "Amish Egg McMuffins",  McDonald's rolled out the "Breakfast Burrito" and homemade "copycat" versions of those became all the rage in Amish kitchens.
I love, love this next story from Greg because it encapsulates the cultural dichotomies that the Amish encompass that almost anyone who spends enough time with them encounters at one point or another:
As a poor graduate student, my transportation from my home in Lafayette, IN to Adams Co. (approx. 120 miles) was an old Chevy Impala station wagon.  I occasionally had trouble starting the car, due to bad battery terminals.  One night, after conducting interviews with an Amish family, my car refused to start.  My efforts at cleaning the battery terminals with vinegar (which I kept with me) had no effect.  Eventually, the Amish father came out of the house, because he could see that I was having trouble.  He leaned over the engine, tinkered with the battery for a moment, and the car came to life with the next turn of the key.  I'd been a driver for 14 years at that point, but a man who lived a 19th-century lifestyle and traveled by horse and buggy knew more about car batteries than I did.
I applaud the kid for having vinegar with him and thinking to clean the terminals that way, I probably wouldn't have been so prepared.  Thanks to Greg for the great stories!
« 5 Kid-Friendly Activities in Holmes County, Ohio's Amish Country
Throwback Thursday: Homemade Amish Pizza, Amish Wedding Supper, Oatmeal Cinnamon Crispies and More! »