Converting to the Amish is on my mind today because of a piece in today's blogroll.

There was once a man named Joe that used to do some occasional lawn work at my parent's house years ago.  I didn’t know the man well, but Mom and Dad learned he had an interest in the Amish. It was about the same time my fascination with Plain cultures was taking root, so Joe and I had a couple of conversations about our mutual interest.

CAPTION:  This is the view from the buggy. I was taking a ride with a former non-Amish schoolteacher who made a rare mid-life conversion to the Amish.  He lives in Hardin County, Ohio. 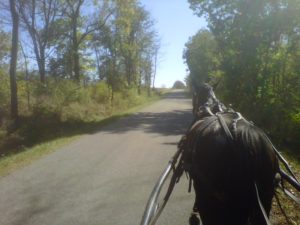 “You know, if I could do it all over again I would’ve married me an Amish woman,” Joe said matter-of-factly.  He was probably in his late 50s at that time.

I thought to myself that I’m sure his current wife would be a little less than thrilled at such a comment, but he was emphatic.  I asked him why and he reeled off a laundry list of virtues and values that draw him to the Amish.

"Did you ever think about joining?" I asked him.

So he was someone who liked the ambiance of the Amish but not the substance so much.

“Oh and you ever want to stay up in Holmes County, let me know…I have a good Amish friend who has a little cabin on his property. It’s right on a pond. He lets me go up there and rent it for a song and I’ll just hang out there and fish. His name is Sam Stutzman (not his real name) and he'll rent it to you if I put in a good word for you”.

I still remember the name of that cabin-owning Amish man all these years later but I’ve never had the occasion to contact him and try to stay.

I’ve never really seriously thought about joining the Amish church.  For me, it’s just not realistic.  Although I do love many of the values their church espouses.  I have met outsiders who have joined and integrated themselves successfully.   One of the biggest barriers to an outsider joining the church?  Language.   If you’re a kid, learning a new language is easy.  I’ve written before how I lived in the Middle East as a child (my Dad’s job with a steel company transferred us all there).  By the time I was 8 I was pretty fluent in Arabic.  My Mom would even have me tell the cab drivers in Arabic how to get where we needed to go.  But that’s an 8-year-old.  Learning a new language as an adult can be done but it takes a persistence and perserverance that is uncommon.  Although I do know a man who is now in his 50s and joined the church and is well accepted and integrated into his settlement.  He was a bachelor who joined and he is still a bachelor and maybe that makes it easier.  I think trying to integrate an entire family unit into the Amish lifestyle would almost be more difficult.   He speaks the Amish German so fluently now that his English has a slight lilt to it.

Over the years I have met a former inner-city school teacher, an ex-Roman Catholic college student, an Austrian businessman and some others who have joined.  Joining the Brethren church, I think, would be a bit easier because you don’t have to give up every technological intrusion. I know a former aerospace engineer who is now a fully integrated Brethren church member who owns a cabinet shop in Ohio.

I tried once to meet up with the Moser family in 2011 but ended up lost near Marion, Michigan. Their trail went cold.  I've linked to this article before but this is one of the best pieces I have ever read about a family's journey into the Amish.  I still would like to catch up with them sometime and just hear more of their story first hand.  Apparently I just missed the by about a week when I was visiting an Amish settlement in Ohio a year or so ago.  The Mosers eventually ended up in Manton which is a more accepting of outsiders community.

A non-Amish teenage girl showed up at one of my library talks once.  She was dressed plainly and was interested in converting to the Amish faith.  I think it would definitely be easier the young you are.  I often wonder what happened to her.

Other impediments to outsiders joining would just be the deep Biblical knowledge and the sense of heritage and history that goes with being Amish.  One can learn the Bible, but no amount of studying and learning can give you the heritage and history and tradition from oral family stories to passed down recipes to sewing patterns.

So while I'd never be a good Amish convert, I do continue to admire them from afar.  Now, maybe I should finally call Sam Stutzman about that cabin!:)

« Aster, Me, and Plain City
Updated Thoughts: 22 cups of peanut butter, fried children, and I and Me »