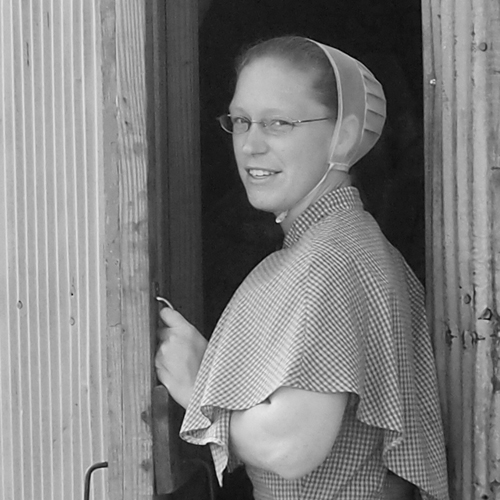 Rosanna is Old German Baptist Brethren and a farmer, teacher, sister and daughter in Kansas.

Thinking about my week ahead only brought a sigh: there were reports  overdue  that  were  still incomplete. Also, the inspectors had just handed me some new food safety regulations, and we had five jam-packed days of chicken and beef processing. In the middle of it all, I had two desks in my bedroom, swallowing up all the space as I tried to transfer stuff from one to the other. “What a stressful  week I” I  lamented to myself. But then I remembered what my week  was  like a year  ago.  I  decided  that  my week would actually be quite manageable. A year ago, nearly everything that could go wrong with our lives did:

I was out feeding turkeys, and going through the busy day‘s schedule in my head: Hurry, get dressed for church, then rush over to help prepare the meal for my brother’s afternoon wedding. Preoccupied, I walked into the house, and immediately felt the somber atmosphere, not the bustling busy-ness that accompanies a big event. I peeked around the corner to see Mom and her sister, who came out for the wedding,   bending  over   pale  and   unresponsive  Grandpa.  While   I  was out  doing  chores,  Grandpa   had a  stroke at the breakfast table. The ambulance came, whisking Grandpa and our parents away. But the wedding  was scheduled, and life must go on. As Grandpa wrote his last life’s chapter,  my brother  started a whole new book. It is hard to smile for wedding pictures when your grandpa is dying. And we were happy, in a way, for my brother, but it was truly the worst wedding of my life.

Just that week Grandpa had determinedly rolled his wheelchair across the gravel drive to visit us in the dressing shed, a sheepish grin on his face when we scolded him for such a risky endeavor. Now he lay in the hospital, losing bits of responsiveness each day. Here it was, the fourth day after Grandpa‘s stroke and I hadn‘t gotten to see him. I had stayed home tending to chores, chicken dressing and other necessary business.  In addition to  Mom and Dad being away from the farm at Grandpa’s bedside,  my best farm hand was on vacation in Hawaii, so staffing was really short during this harvest season. His consciousness was fading every day. What if Grandpa died before I  would say goodbye?

But my worried heart was quite relieved when they finally brought Grandpa back to our house, for whatever time was left. We settled him in his bed, and Marvin brought his little daughters to say goodbye. In a rare display of recognition, Grandpa reached for Marvin and tried to say something. That first evening, friends came over to sing with us around his bed. He had always had a genuine interest in children, so the room was filled with young people singing around the lumps in their throats.

Two days later, I emerged from the dressing shed as the sun set, having had a long day dressing chickens. away from the family gathered around the bedside. As the rest of the family was in the kitchen preparing supper, I rattled on to Grandpa about the day‘s happenings, as we always did at the end of the day when he was well. Having exhausted every detail of the eventless day, (it is not very easy to do one-sided conversations) I looked for something to do. ”Oh, how about some water Grandpa? Your lips look a bit dry.” I didn‘t want to leave, as I had gotten so little time with him this week. I wet his lips and mouth  with  a  swab,  and  he  gave  a  deep  breath  that   I   took  to  be  appreciative.  Then,   because  it  was  just  the two of us in the quiet room, I began to sing a song that fit my mood: ”Are you discouraged, and are you blue. …” and finished with the inspiring chorus, hoping Grandpa could still hear words: “A bright tomorrow begins today…” I sat in the chair beside the bed holding his hand and sang with quiet emotion yet another song: “It’s always darkest before the dawn, don’t be discouraged but carry on. He’ll not forsake you, the sun will break through…”

Something happened while I sang. My mind denied it for a while, so I was not actually conscious of it. Grandpa’s breathing had become shallower with each passing day, so it was a bit before I realized that I had not noticed a breath. No, surely not. It‘s probably my imagination. Then, certain of the truth, I sat there, still in no hurry to leave. I saw no sense in rushing out to the family in the kitchen – he had already passed, what was the hurry to spread the sad news? Besides, how was I supposed to tell my mother  that   her  daddy   had  died?     About   that  time   my  aunt  came  back  to  tell  me that  supper  was   ready. I must have had strange look on my face because she asked me, “How‘s Grandpa?” “I don‘t think Grandpa’s breathing anymore.” I replied. There was something about this date that no one had dared to tell Grandpa, but he seemed to know it subconsciously: eleven months and eleven hours ago his wife had died.

And I, who had missed all the excitement of the stroke and hospitalization because of the farm chores, was the privileged one to hold his hand in the peaceful transition between life and eternity.