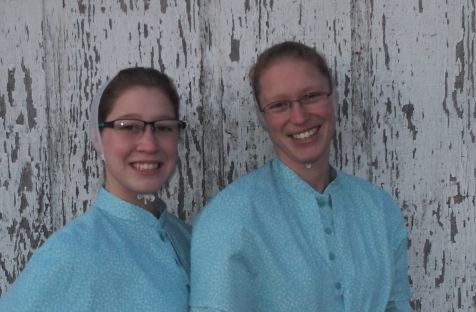 It was a drizzly December day. Our family stood expectantly beside a farm pond in our Sunday best, huddled under umbrellas. This was Joanna’s baptism service. And neither rain nor snow nor sleet keeps German Baptist Brethren from performing baptisms. As a young adult who is learning to think for herself, Joanna had become increasingly aware of her own imperfections, and the resulting need for salvation and a personal relationship with Christ. She had, after much prayer and repentance, asked for baptism. We believe baptism serves a multi-faceted purpose: it is a public confession of faith, a symbolic cleansing from past sins, an outward manifestation of her new birth, a request for the indwelling of the Holy Spirit and admission into the fellowship of believers. As a church, we are strong proponents of performing baptisms when the applicant's convictions persuade them of the need, and not waiting for better weather. All baptisms are conducted outdoors, in streams or farm ponds. Interestingly, the majority of baptism requests occur, not in the warmer months, but in the cooler. I’ve attended baptisms where ice six inches thick had to be cut before the baptism. To my knowledge, not a single baptized individual has ever become ill, despite becoming soaking wet in freezing weather.

Standing there beside the water, my mind drifted back two months, recalling when I last stood beside another baptismal stream, this one in Germany. It was a sweltering August day, and I and my 3 travel companions paused beside the Eder River. I sat on the grassy banks and submerged my feet in the cool, clear waters that ran much deeper and swifter than I first imagined. The four of us had expended a good deal of effort to make it to this tiny village of Schwartzenau.  Why were we spending our time in the ordinary German hill country instead of a tourist-friendly city? This rural area had given asylum to our ancestors who were persecuted for their beliefs. It was here, in the clear Eder River, over 300 years ago, that my great, great, great, great, great, great, great grandpa first baptized other believers that were convicted of their need for adult baptism. This little group of eight dared to follow their conscience even though adult baptisms were illegal in 1708. This act of faith fostered a larger fellowship of believers that grew into the Old German Baptist Brethren Church that I am a member of today.

After the congregants all had a chance to welcome Joanna into the church, we turned to walk back towards the shelter of our cars, still huddled under umbrellas. The drizzly day pulled my thoughts even further back in history to another baptismal stream in Germany that was also conducted in December. A woman was searching for someone to baptize her, and my forefather, Alexander Mack, agreed to travel into this particularly hostile region of Germany to administer it. As a minister of the Gospel, he felt compelled to baptize any who sincerely desired it, even though he was risking losing his family and freedom. For this “crime” of conscience, others had been jailed and exiled, or even worse, their children torn from them and placed into orphanages. Already Mack’s belief that the Bible should be taken literally had cost him both his family fortune and political position. In the very area where the baptism requester lived, he had held several baptism services just the previous year. These acts had turned my ancestor into a wanted man, and one of the baptized persons, a widow with children, was expelled from the region for having requested baptism. But Mack went back, and the Officials had heard the rumor. They were determined to break up this December streamside ceremony. Anticipating such a militant action, the believers quickly held the service before the baptism could be prevented. Although both Alexander (as the minister) and the newly-baptized citizens still had to answer for their actions before a council, and be expelled from the region, this was considered a small thing because the baptism had been administered successfully.

Rosanna and Joanna two years ago. Brethren do not dress plainly until baptism

And here we are, in America, having completed Joanna’s baptism service that totally changed my little sister’s life. We had gathered without fear for our lives. None of the two hundred that gathered to support Joanna in her decision had to disobey any laws to attend.  For the tolerance of the government in this land, we gave thanks, and in gratitude, pledge to live quiet in the land.