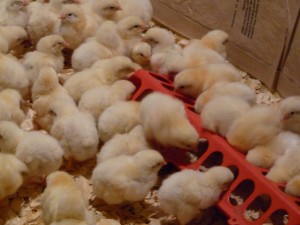 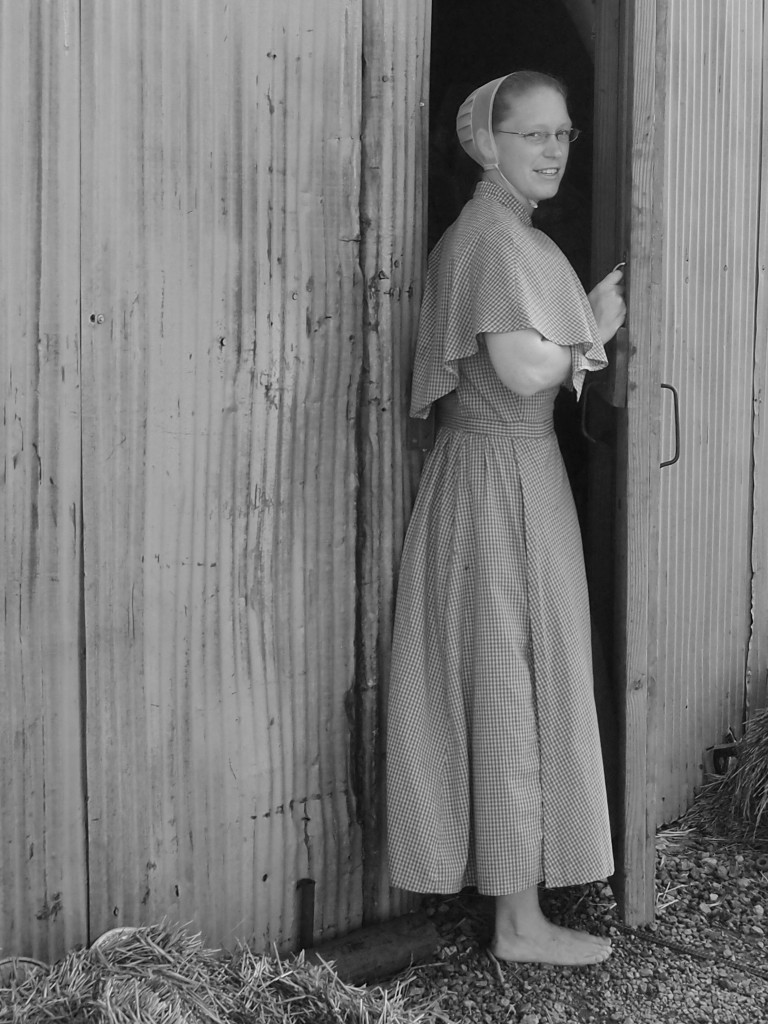 Rosanna is Old Order German Baptist Brethren and shares stories from her life each week.

I got the call in the middle of chicken dressing. I hurriedly rinsed the unmentionables off of my hands and answered. “Ya’ll still want chicks? Be at Marshfield, Missourah in 1 8 hours. We’ll have 4,000 for ya..”

Oh, boy. I’ve still got 200 chickens to dress before I can worry about getting everything together for the onslaught of babies. We need to spread bedding, place feeders in the brooder and fix up the heaters. Perhaps the boys can help when they finish building the loading dock. And an even greater problem: Marshfield is a four-hour drive. What vehicle do we have that can hold 4,000 chicks? The truck is in the repair-shop, and the van needs to go deliver the eggs in the morning.

And you’re probably wondering what we a re going to do with four thousand chicks in the first place! Really, we aren’t going to keep them all. We are sort-of a Hen Adoption Agency. All of our neighbors call us and ask when they can get some baby hens, and place their requests in numbers ranging from 6 to 1,500. We tell them that when they show up on our doorstep, we will notify everyone. The reason for this is the little hens are a special breed that you can’t order from a hatchery catalog. They are brown egg layers bred specifically for the big egg players. These Bovans are  both feed-efficient and outdoor hardy. We want to access some of those awesome genetics, but they really don’t sell to anyone with less than a 50 -20,000 chick order. They kindly send us a few leftovers, in the unlikely event that there are leftovers. This, of course, means that we know neither the day nor the location when those chicks will be available.

While I delivered eggs, Mom drove to pick up the chicks (Editor’s Note:  This column reminded me of one of my favorite “Rosanna adventures” which she wrote about 2 years ago when she drove to Iowa to pick up some chicks, click here to read that classic) . Ava and Harper came down to help us unload all those fuzzy bodies from boxes. We were worried the littIe girls would stomp on a chick in their boots, so we removed them and let the girls walk barefoot. They giggled and squealed at the chicks running over their feet. “It tickles!” After all the boxes were emptied, we lingered in the brooder, not ready to leave such a hopeful scene. I placed my hands on the ground and relished the feeling of the chicks running and pecking over my hands. It’s a string of contrasting sensations: there’s their cold poky little toenails, the warm, downy body and short taps from their little beaks as they explored their new world. As I sat there relaxing with my two nieces and 2,200 chicks, Il ooked out across the sea of fuzzy brown heads and beady black eyes and realized that these were the lucky ones. There were 68,000 chicks on that semi and we only pulled out five percent of them. These 4,000 are all destined for small farms where they will be given personalized care (and maybe even names!) as well as green grass, fresh air, and room to chase bugs. The other 64,000 are headed  for large layer houses. Sure, they will get climate-controlled  housing, but I’m not so sure about the fresh air part.

This train of thought caused me to remember a book that Grandma Bauman gave me for Christmas the other year. It was a child’s storybook printed in 1968, called Chicken Ten Thousand. It’s actually really accurate for a children’s book, both pictorially and factually, which impressed the farmer in me. But beyond that, the book is set in prose and is rather thought-provoking.  Iso enjoy children’s books that have a message woven in for the adults. The book opens with ten thousand look-alike eggs in a perfectly climate controlled hatcher that was more comfortable than a hen. “No need for hens, except to lay, ten thousand look-alike eggs.” Chicken Ten Thousand was hatched, along with Nine thousand, nine hundred, nine other little chicks and tumbles into life right along with them, with nary an evidence or  credit towards humans, but always those accurate machines. Little Ten Thousand progresses through life to “a wire cage just big enough to hold one  hen, row upon row, above and below. And every now and then came instant dark for exactly six hours.” But Little Ten Thousand never could catch a glimpse of just what that wonderful thing was that she laid before the conveyer whisked it away. “Life is a husk,” sighed Chicken Ten Thousand. But one day she was pulled from her cage and crammed on a truck bound for the soup factory. Fortuitously, the crate fell off of the truck and Chicken Ten Thousand felt for the first time “green sawdust under her feet”. After the progression of a bit of time, “ten wobbly- legged chicks came scrambling when Chicken Ten Thousand clucked. And Little Ten Thousand in her chicken heart was content.” I‘ll admit there’s a touch of utopia in the story. I’m not certain just how those ten chicks hatched when there wasn’t a rooster around… I’ll admit that I’m also not really concerned over my hen’s contentment, as well. Health, yes,

but I’m not attempting to decipher any supposed emotions on hens. If they had emotions, I’m sure they’d be as unstable as any other female’s. Therefore, I’m going back out to the brooder at 11 pm to make sure that a draft is blowing and chilling the little peepers, and to re-fill their feed and water. Then I’ll pause for a moment in thankfulness that I have the chance to improve the lives of 4,000 hens.