Read Life of Pie, Part FIVE and past installments here.  This is a summer "mini-book" series describing my attempts to create an Amish Cook pie line.  The journey would span 12 states, Canada and last over a decade.

Editor's Note: names have been changed in this post.  Caption...a Marsh Supermarket in my hometown of Middletown, Ohio. 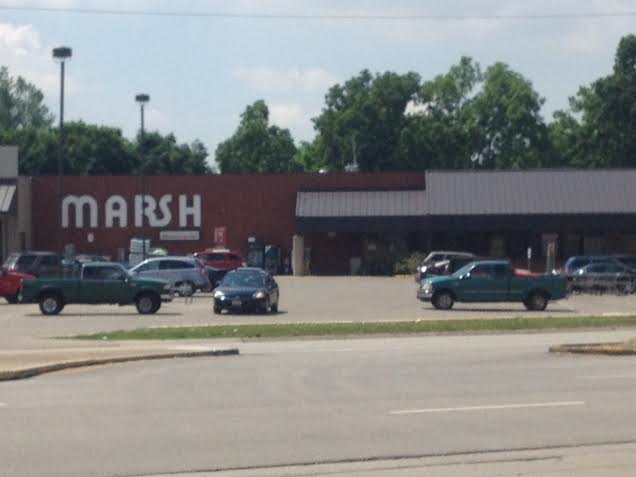 The Amish Cook column has been a 20-plus year checkerboard of sputters and starts, near misses, missed opportunities, and just plain bad luck.  I’m not complaining.  Really, I’m not.  I’ve had the opportunity to see places I’d never get to go otherwise and meet some incredible people.  Still, if one wants stability in their life here’s some advice: don’t go into the business I went into.

In the spring of 1996 the owner of the small family owned pie bakery in Dayton called me into his office. A portly graying man, he seemed like someone who was no longer into the business.  The bakery was dingy and unappealing.  His idea of marketing was to put a new cardboard sign on the counter of their tiny retail shop announcing the week’s special flavor.

“Okay….” I said, uncertain where this was leading.

His son-in-law, Tim, would stay on as manager but the pie plant would be owned by three investors who wanted to take the tiny pie plant to the next level.   The brothers were interested in keeping The Amish Cook line, viewing it as a “growth opportunity.”   I met with The Brothers the following week and their right-hand man, Ken Burger.  I chuckled to myself at a burger selling pies, but it worked for me.  They presented me with plans of how they would take The Amish Cook pie brand to “the next level.”   Soon, they predicted confidently, “you’ll see The Amish Cook in stores across the Midwest.”     In exchange for letting them use the Amish Cook name and recipes, I would receive product input and a royalty for every pie that was sold.   As we sat around the bakery’s tottering, warped conference table (“we’re also going to upgrade this place!” they exclaimed!) they handed me the sheet of their sales projections. I glanced at what their thought would sell over the months ahead.  My hands were shaking.  I had never earned those kinds of dollar figures before.  It appears that my moment had finally arrived.

The internet was only just beginning to catch peoples’ attentions.  Newspapers were basking in the final years of their golden age and The Amish Cook column was at its peak number of papers, appearing weekly in close to 140 newspapers.  I was only 24-years-old and while it had taken me a few choppy years to find my footing, I thought it was finally over. I was going to have a real career.

But it quickly appeared that nothing much was changing.  Tim was going to remain involved in marketing The Amish Cook and he had the creativity and vision of a houseplant.

“Yesiree (a phrase he was fond of), The Aim-ish…

“Oh, sorry…yesiree,, The Aim…Amish Cook pie are really going to put up some volume.  Just you wait and see.”  Tim kept promising.

I waited for a long time and saw nothing.    As owner of the brand, it was time to take action on my own.  But this time it wouldn’t be some 20-store pie route of sleepy IGA stores.  No, I needed something larger, something that would make a big splash.   That’s when I turned my attention to Marsh Supermarkets.

Marsh was – and is  - a chain of about 100 grocery stores primarily in Indiana with some in western Ohio.  I never quite understood their identity and maybe they didn’t either.  But some of their stores were these upscale, palatial, glass-atriumed wonders offering in-store bakeries, floral departments, and cafes.   These stores were especially prominent in the affluent Indianapolis suburbs.  Yet, visit some of their smaller-town stores, though, and the supermarkets look like they’ve been run over by a truck and neglected for the past 30 years. It was difficult to believe they were part of the same chain.  Marsh was once a cutting edge innovator.  Their Troy, Ohio store, in fact, has the distinction has being the first grocery store to ever us an electronic scanner to check-out.

I quickly recruited a competent, capable food broker who had a close relationship with Marsh’s bakery and deli division.  The Amish Cook column was seen in most cities where Marsh had a presence, so it was a great fit.

Meanwhile, my personal life had undergone a metamorphosis of sorts.  My wrenching break-up of the autumn had been replaced by a newfound resolve that I had never before felt (and haven’t since).  I spent the winter reconnecting:  running, painting, reading, writing and even spelunking.   Running was only something I had just started dabbling in before the break-up, but I threw myself into it after and by winter’s end I was regularly running 10 miles or more at a time. And by spring’s arrival I had lost 30 pounds in five months and I had decided that at age 23 it was time – past time – to move out of my parents house and to move to Oxford, Ohio so I could resume my interrupted college degree studies.  All of those things were providing me with a newfound sense of optimism.  But it was news that I came home with one evening that really had me convinced my future was bright. 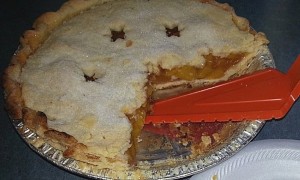 We had 7 or 8  flavor varieties under The Amish Cook label.  Peach pie was one of the most popular.