It was a gorgeous spring Saturday in Ohio, so Rachel, myself, and Aster decided to trek to the 55th semi-annual Milroy Amish Consignment Auction usually held the final weekend in April.  Proceeds from the event go to help the local Amish school. 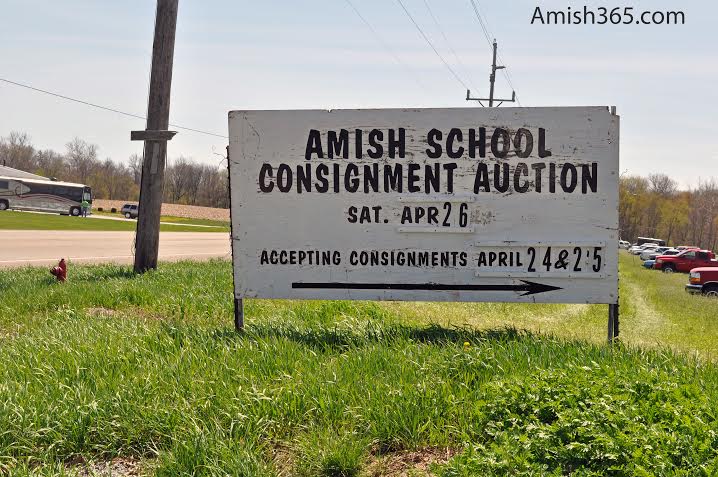 Milroy is a relatively small (4 church districts), somewhat unusual Amish community.  The Amish group in Milroy are a mish-mash of traditional Pennsylvania German Amish and Swiss Amish from the Berne area.  Typically the two distinct groups of Amish live in separate settlements, but Milroy is a place where the boundary has crumbled.  Schwartz (a a very common surname in the Berne area) is just as common as Stutzman (a traditional Pennsylvania German surname).

Milroy is about 90 minutes from where we live and Rachel warned me we should shoot to leave around 9 a.m.

"All the good stuff will be gone if we get there too late," Rachel predicted

But it's Saturday morning so I wanted to take my time a bit more, sleep in a touch, check the oil and tire pressure in the car before the journey.  Still, we got a later start than I even wanted. We didn't leave Middletown until close to 11.  I've learned that having to pack up a baby to go anywhere makes everything take about an hour longer than  in my pre-parent days.

So we ended up arriving at the auction around 12:30.  We first dodged a mini parking lot scrum between two ladies (more on that tomorrow), unloaded the stroller and Aster.  Here we saw two men on horseback leaving the auction and Aster was mesmerized by what must have looked to her like giant dogs.  It was the first time she had ever seen a horse up close. 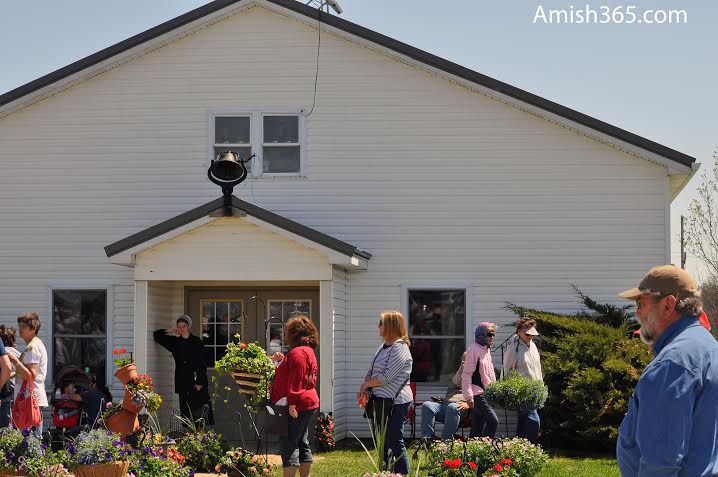 We headed first for the auction ring right outside the school-house.  Here a huge and varied selection of spring flowers and shrubs were being auctioned off in the traditional quick cadence of a chattering Amish auctioneer.

Soon my mind began to drift to the thought of food.  These auctions draw plenty of people just for the good eats.  What first caught our eye was a long line in front of the ice cream booth.  Homemade ice cream, hand-churned on site. Generous helpings of raspberry or vanilla.

"Let's start there!" I suggested.

The line moved at a decent clip and soon there were only about five customers in front of us.  Yum, this is going to be good, I thought.  But suddenly one of the Amish ladies abruptly takes down the sign advertising ice cream.  They were out. The Amish man in charge of the ice cream enterprise said they'd gone through 60 gallons.  Okay, onward to the main dining hall for some fried pies, doughnuts, and cream sticks. 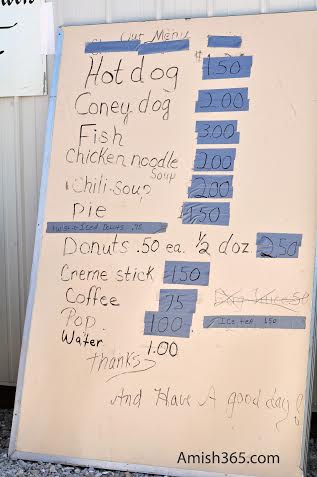 In the dining hall there was a mini-kitchen set up serving all sorts of  lunch-type goodies.  I was more interested in dessert. But when we got to the table to place our order, we found out they were out of fried pies, doughnuts, and cream sticks.  So we got one of the last pieces of crumb-top apple pie (yum).  And then made our way over to the "bake sale" table.  Here a couple of Amish ladies from Milroy were selling cookies, pies, pumpkin rolls, brownies, and a German chocolate cake.   I talked to the ladies about the preparation that goes into the baked goods for the auction.  It sounds like most of the Amish ladies in the community chip in to make the baked goods. 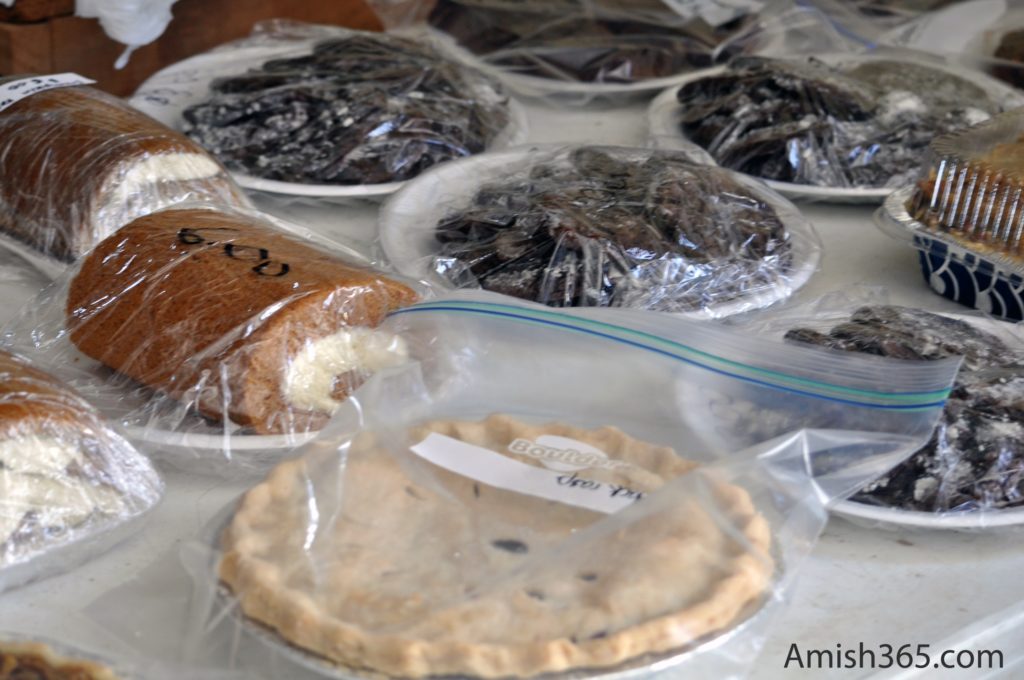 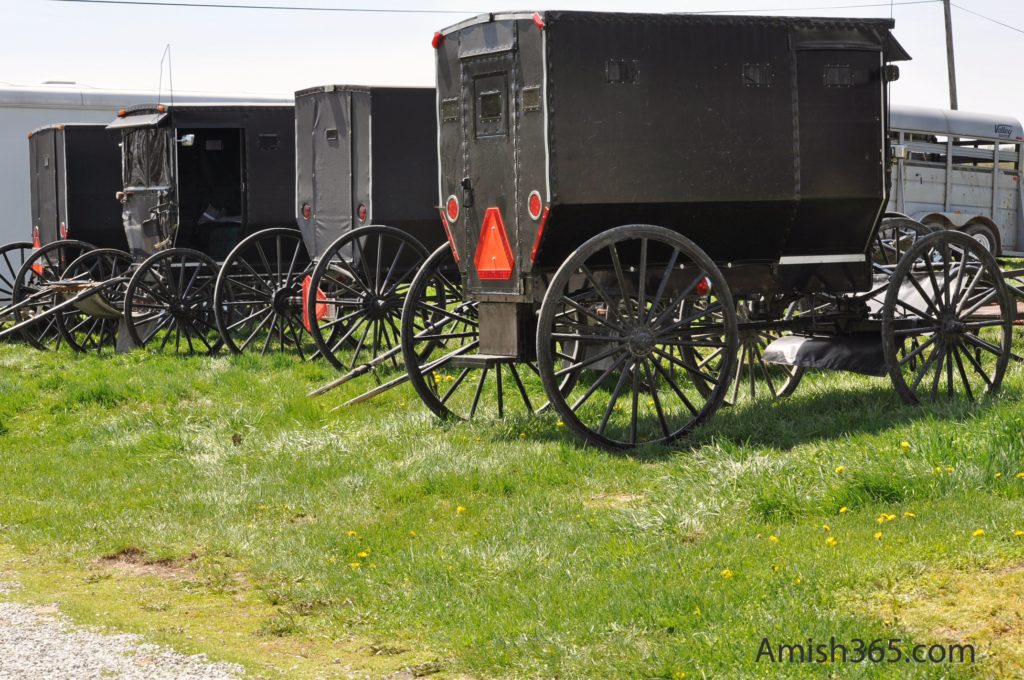 Homemade noodles seemed to sell the fastest.  They were completely out of those by the time we got to the table. Homemade bread was also a swift seller.   We picked up a plate of brownies and some chocolate crinkle cookies.

The auction attracts thousands of people.  About 20 percent of the attendees were Amish, with the rest overwhelmingly non-Amish.   The Amish attendees were from the Milroy settlement, but the distinctive dress of the "Lancaster County" Amish of nearby Fountain City were clearly visible, as were some Amish from Berne, a community which enjoys strong  familial ties with Milroy.

By around 4 p.m. the auction is completed and the day done. Aster seemed to enjoy her first Amish auction.  She was really taking in everything and her delighted jabbering (she's inching closer to saying actual words) seemed to indicate a thumbs up from her.

Tomorrow, I'll share more scenes and stories from the auction.  But here are a few more sights.  Again, though, if you go to one of these auctions, what lesson do we take away from this? GO EARLY!:)

« The Amish Cook: Homemade Banana Muffins
Parking Lot Scrum: What Would Have You Done? »