Morning news shows are on my mind this morning because The New York Times published a great selection of behind-the-scenes photos from the most watched "breakfast shows."

When I was growing up, NBC'S The Today Show ruled the roost.  Bryant Gumble and Jane Pauley were fixtures on our TV as I brushed my teeth and ate my breakfast in preparation for the day ahead.  Bryant and Jane seemingly seamlessly gave way to "Katie and Matt"in my college years  (okay, there was the brief, rocky reign of Deborah Norville) and now, well....nothing...I don't watch any morning news shows at all anymore.  Although if I had to watch one, I'd probably still watch Today out of habit. But Robin Roberts on ABC's Good Morning America is the host who seems the most genuine and likable, so I might well switch to her.   As an adult, I just log on to get my news.  I can read what I want that way and I can do it quietly while the rest of my house is still asleep.  I don't really miss the fluff features of morning TV. 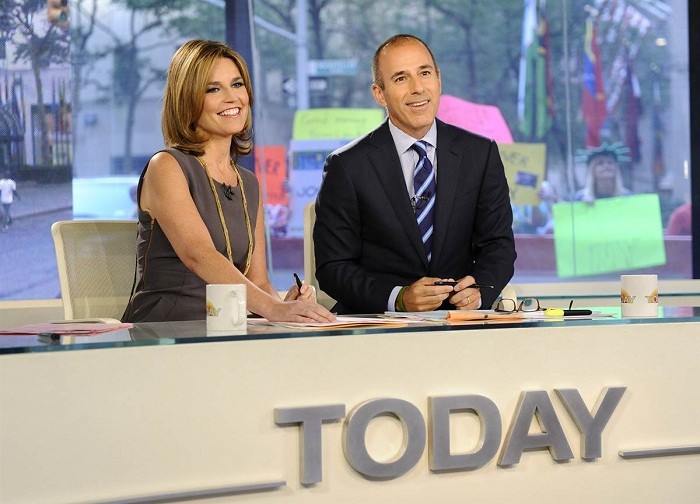 I've been a guest on many early morning news shows (mostly local ones) to promote our various cookbooks over the years. I often took my own time and expense to do such things because no one else would and you have to go out and pitch your products if you want to get ahead.  I'm not a morning person, so being chipped at 7 a.m. while I discuss shoofly pie does not come naturally to me.

The only New York-based morning show that I've done is Fox and Friends.  It was actually a show called Fox & Friends First, which was/is the far less-watched lead-in to Fox & Friends.  Rachel and I arrived in town for the Saturday morning segment (this was back in 2004) with cooler full of Amish goodies that I would take on the air to tie-in to one of our new cookbooks.   What we didn't count on was Hurricane Ivan churning up the Eastern Seaboard. Fox moved to all-Ivan, all-the-time coverage and my segment was bumped to the next Monday morning. So Rachel and I had to linger around New York City for the rest of the weekend.  Meanwhile, our cooler full of Amish goodies had to swelter in a parking garage over the weekend (it's New York, you can't really, realistically lug around a cooler...we reasoned the food would still LOOK okay, just tackle anyone who tried to eat what would sure to be a botulism conference)

The original Saturday morning segment was supposed to be an outdoor one which would have been more relaxed and spontaneous.  Our rescheduled Monday morning segment was crammed in between a celebrity gossip interview and an interview with an Iraqi biological weapons expert.  He kept wanting to try our food which by then, after simmering in our car all weekend, probably was a biological weapon.

I was interviewed by host Alisyn Camerota who seemed puzzled and unprepared for the segment, which was filmed crammed into what seemed like a closet.  A phone even rang once during the segment which lasted a grand total of about 2 minutes, half of what was originally planned.

"The Amish are't really known for their cooking are they?"  Alisyn asked.

Um...I think I wanted to say, "sheesh, where have you been, that IS what the Amish are known for! Why do think I am here?"  But I politely and gently walked Alisyn into the ins and outs of Amish cooking, and I'm sure within 2 nano-seconds after the interview was over she had forgotten everything I told her.

So, do you have a favorite morning TV news show?  Or have you, like me, abandoned them in favor of something else?