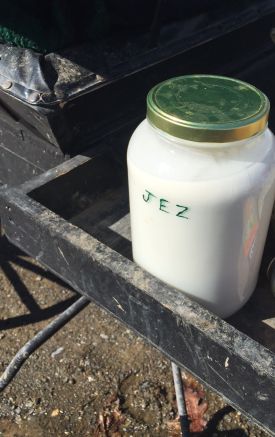 Raw milk is a staple of the diet for Amish in Maine, it is legal here. 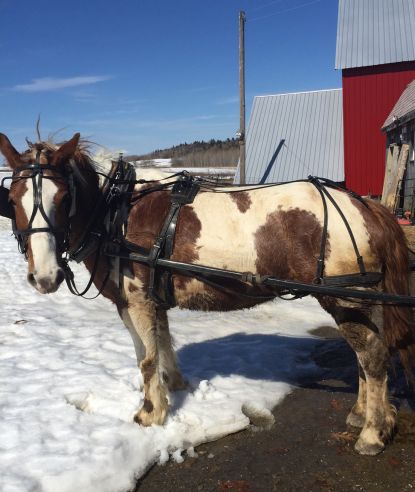 Amish in Fort Fairfield, Maine: When I  first heard about the Amish settlement at Fort Fairfield, Maine It sort of captured my imagination.  Only a few years old, this community seemed about as remote as one could get, far up into northern Maine just a stone’s throw from the New Brunswick border.  The winter weather conditions would be harsh and, I imagined, it would be far, far from anywhere.

Well, I was wrong.  Mostly.

It depends on your definition of “remote.”

The Amish settlement goes by the name “Fort Fairfield”, but its actually located pretty much equidistant between Fort Fairfield and Presque Isle.   And while these areas are quite remote and far removed from anywhere (the closest “big city” of any substance is Bangor 2 hours to the southwest) Presque Isle actually has a  lot of “stuff” so you don’t feel so isolated.    Preque Isle is, as the name implies, a sort of "island” in northern Maine, a hub for banking, shopping, and working.  Presque Isle has an airport with commercial flights and less than 10 minutes by car from the Amish settlement is a mall with a JcPenney’s, movie theater, and a Lowe’s. 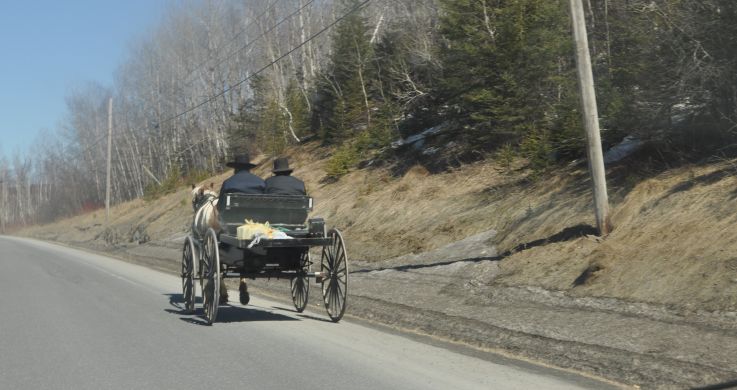 Presqule Isle is a short buggy ride away with all its shops. One of the first warm spring days in northern Maine brought out a an open buggy.

In fact as I was driving by the Lowe’s, I spied a horse-drawn buggy slowly clattering down the highway.  So, yea, I’m not so sure I’d call being able to access a Lowes and Penny's by buggy remote in the strict sense of the word

Since I wasn’t sure where the settlement was exactly I decided to “shadow the buggy” from afar.

Sure enough the buggy led me to the Zook residence.  There were two brothers on the buggy running some errands from in town.  It was actually – for Presque Isle, anyway – a warm April day, temperatures sunny and in the mid-40s.

“The worst thing about winters up here is right now, when you are waiting for the first days of spring but they are slow to get here,” said one of the brothers.

They were also picking up some raw milk from the Zooks since they didn’t have a cow of their own.
“Did you know it is completely legal here in Maine to drink and consume raw milk?”

Winters, they said, are much harsher than the lower Midwest, but that if you have enough home-canned goodies and firewood, it’s not so bad.

“And the vegetables grow really well up here in the summer, I almost think bigger,” said the brothers who moved to the state from Tennessee.

We had a really nice visit and it seems as if the community is growing.

You can read more about the Zook Family Farm here.  In addition to selling raw milk, they sell soap, produce, and hand-made furniture.

So, back to the original question:  if Fort Fairfield is not the most remote Amish settlement, which is?   I'd give an edge to Rexford, Montana followed by Pearisburg, Virginia.   Rexford, Montana really is remote.  By car it takes 35 minutes to get to nearby Eureka (Rexford has a general store and post office and is about 20 minutes from the Amish settlement, but that is about it that is there), but even Eureka just has a smattering of stores and services.  You are about two hours from Kalispell, hardly a major metropolis, but it would have most major services and shops.  Meanwhile, Pearisburg is about 40 minutes by car from Dublin, Virginia, hardly a metropolis either, but it does have your main chain stores, etc and you can make it to Roanoke in an hour or so and that city would have most of what you need (of course if you're Amish you can get by with much less, so remoteness matters not as much!)  Really, I think parts of Holmes County, Ohio are more remote (again, depending on your definition....I'm using proximate distance to services, stores, etc) than Fort Fairfield, Maine.